(Minghui.org) Falun Gong practitioners in Indonesia held a peaceful rally on the morning of July 20, 2013, in front of the Chinese embassy in Jakarta, the capital of Indonesia. They protested the Chinese Communist Party's 14 years of brutal persecution. After the rally, the practitioners proceeded to the center of Jakarta, where they held banners to raise local people's awareness of the persecution and calling on them to help stop the inhuman persecution in China. 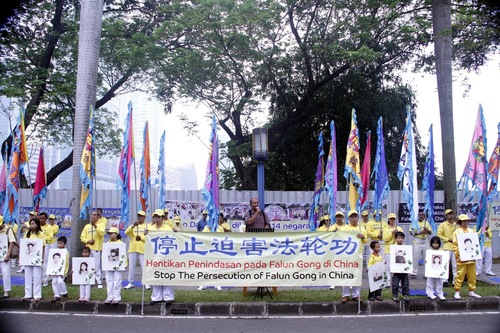 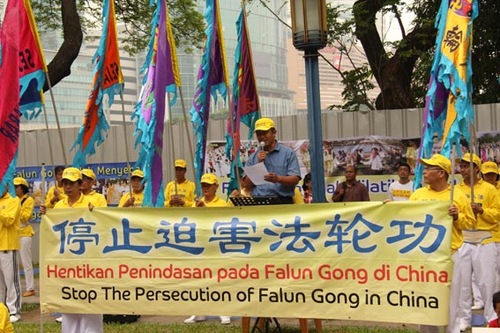 President of the Indonesian Falun Dafa Association at the rally 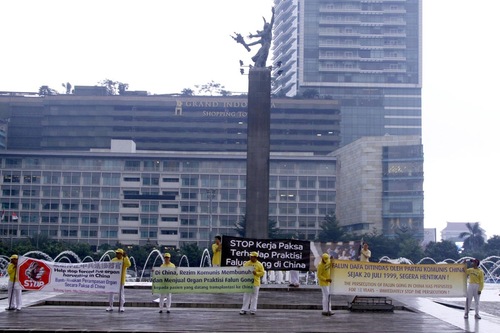 Police Chief in Charge of Security in Front of Chinese Embassy Tells Practitioners: 'Keep Up Your Efforts!'

Falun Gong practitioners arrived in front of the Chinese embassy in Jakarta at 6:00 a.m.. They held banners that read “Stop the Persecution of Falun Gong,” “Falun Dafa Is Good,” “The World Needs Truthfulness-Compassion-Forbearance,” and “Stop the CCP's Live Organ Harvesting.”

They also held display boards showing how Falun Gong is widely practiced around the world and depicting the brutal persecution taking place in China. Other practitioners then began demonstrating the five Falun Gong exercises. Many passersby were attracted to the beautiful exercise music.

At 10:00 a.m., practitioners held pictures of fellow practitioners in China who died during the 14-year-long persecution, in order to commemorate them and call for an end to the brutal persecution.

Fajar from the Global Human Rights Efforts, GHURE, spoke at the rally. He said that the persecution of Falun Gong has lasted for 14 years, and it still continues. The CCP has committed the atrocity of harvesting organs from living Falun Gong practitioners, and the whole world condemns this crime. In China today, more than 140 million people have renounced any association with the CCP and its affiliated organizations. He hopes other countries won't be enticed by the CCP and turn a blind eye to the persecution of Falun Gong.

Gatot, president of the Indonesian Falun Dafa Association, said that he believes in the near future there will be a great change in China, and evildoers will be held accountable for the crimes they have committed.

After the speeches, the Indonesian Divine Land Marching Band performed several pieces. Police officers in charge of security in the embassy area said they very much understand and support all that Falun Gong practitioners have done, because they have witnessed Falun Gong practitioners quietly sitting in meditation in front of the Chinese embassy for many years. Their activities have been peaceful and in good order. The chief of the police in charge of the area told practitioners: “Keep up your efforts!” 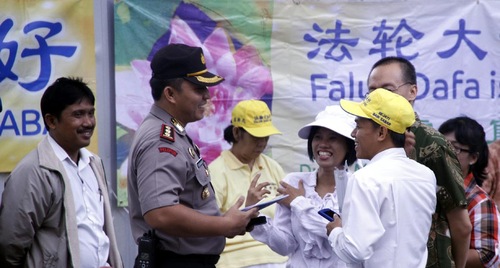 Despite the Rain, Practitioners Raise Awareness and Call for an End to the Persecution in Central Jakarta

Practitioners gathered at the circular fountain in central Jakarta in the afternoon. They held banners to raise awareness about the persecution taking place in China.

Fajar spoke again. He said that the CCP must immediately stop the persecution of Falun Gong and that the forced labor camps must be disbanded.

The Divine Land Marching Band once again played. Even though it began raining, the band continued performing, and practitioners continued to hold their banners. Vehicles passing by slowed down and took informational materials offered by the practitioners.

At the end of the activity, the police officers in charge of security were impressed by the practitioners' peacefulness and perseverance. They showed great interest in Falun Gong and said they hoped to learn about and practice it.