Statistical Overview: Prison Terms Given to Falun Gong Practitioners Over the Past 14 Years

Imprisonment is one of the major ways the Communist regime has employed to persecute Falun Gong practitioners. The Minghui website has published 11,597 reports of practitioners being sentenced to prison terms since the persecution began in 1999 through mid-July 2013.

It should be noted that these statistics were compiled based only on reports that have been received by Minghui. It is widely known that many, many more cases remain unreported because the victims fear reprisal against both themselves and their families if they dare to speak up. In addition, the “Great Firewall of China,” China's Internet censorship program, has been successful in preventing many reports from leaking out. 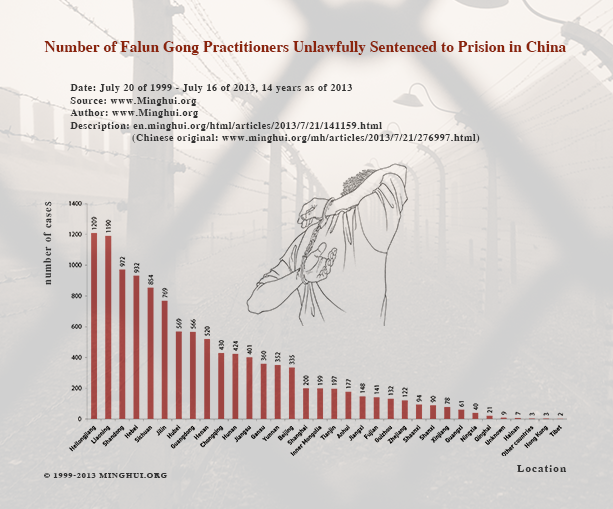 This graph shows the cases, by province, reported by the Minghui website in which practitioners were sentenced to prison. Of all the regions in China, the Northeast, Hebei, and Shandong were the worst. The sentencing in Sichuan, Hubei, Guangdong, and Henan was also severe. Numerous prisons, such as Jiamusi Prison in Heilongjiang, Shenyang Prison in Liaoning, Baoding Prison in Hebei, and Ziyang Prison in Sichuan, were notorious for torturing and abusing practitioners. Many practitioners died as a result of mistreatment in those places. 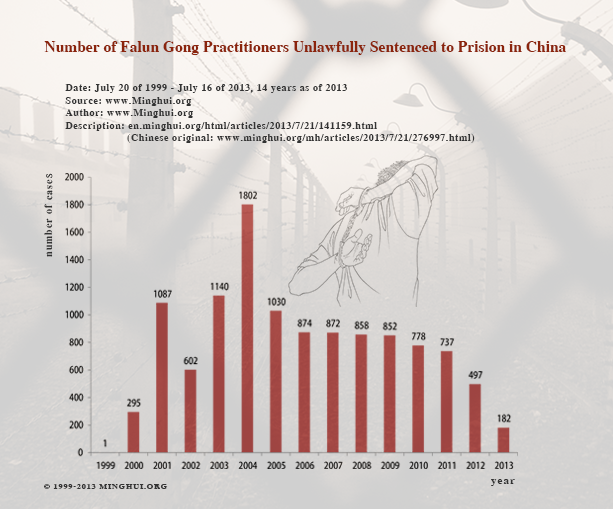 This graph shows the number of practitioners sentenced to prison each year, based on information published on the Minghui website. The situation became severe in 2001, after the Communist regime staged the Tiananmen self-immolation hoax as part of its hate propaganda, and reached its peak in 2004.

Evidence collected from other sources seems to confirm that live organ harvesting atrocities  were at their peak between 2003 and 2006.

Decision-making with respect to the persecution is largely the responsibility of the 610 Office, an extra-legal organization launched on June 10, 1999 (hence the name). With power similar to the Gestapo during the Nazi era, the 610 organization permeates each level of government and directs the implementation of the persecution of Falun Gong.

China's justice system has no independent authority, as it must follow orders from the 610 Office, either directly or through the Political and Legal Affairs Committee.

Every aspect of Falun Gong trials are predetermined, from the trumped up charges to the unjust verdicts. They are nothing more than show trials. Some judges have even stated openly in their courtrooms that the law does not apply in Falun Gong cases.

Imprisonment often involves hard labor in slave-like conditions. Party officials demand that prisons force practitioners to give up their belief, a process they call "transformation". Failing to meet "transformation" quotas negatively affects staff bonuses and may even jeopardize their jobs. As a result, the guards usually torture practitioners ruthlessly, either directly or by giving orders to inmates. Injury, disability, and death are often the outcome.

Prison is not the final link in the persecution chain. Many practitioners, after surviving the physical and mental abuse in prison, were later sent to brainwashing centers. This, again, is decided by the 610 Offices. Various brainwashing strategies perfected in the Cultural Revolution are used in conjunction with intensive physical labor and torture.

Falun Gong teaches people to become better people; better family members, neighbors and responsible citizens. Falun Gong does not harm anyone or anything. Practitioners are free to continue practicing or to stop at will. It is certainly not a "cult" as the communist regime frantically claims.

Practitioners are imprisoned simply for their beliefs and for their efforts to raise public awareness of the persecution they endure. This continues to be the case in China even today. While Party mandarins trumpet the "rule of law" across China today, the brutalities experienced by Falun Gong practitioners reveals a far different truth.