Statistical Overview: Labor Camp Detentions in the Past 14 Years

(Minghui.org) Related Article:  “Statistical Overview: Prison Terms Given to Falun Gong Practitioners Over the Past 14 Years”

Forced labor camps have been a major tool in the Chinese Communist Party's repression of Falun Gong over the last 14 years. Chinese citizens can be sent to forced labor camps without facing any formal charges and without trial. It is done purely by administrative decree. Conditions in the camps are harsh and often involve slave-like labor, brainwashing and torture.

To date, the Minghui website has published reports of 25,411 cases of labor camp detention and 11,597 cases of imprisonment since the persecution of Falun Gong officially began in 1999.

It should be noted that these statistics are compiled based only on reports that have been received by Minghui. It is widely known that many, many more cases remain unreported because the victims fear reprisal against both themselves and their families if they dare to speak up. In addition, the “Great Firewall of China,” China's Internet censorship program, has been successful in blocking many reports from leaking out. 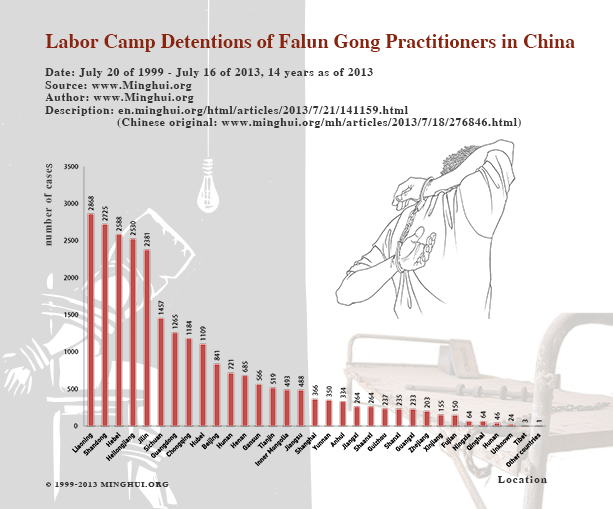 The statistics show that the largest number of detentions came in Northeastern China (Heilonjiang, Shenyang, and Jilin) along with Hebei and Shandong. Sichuan and Hubei followed. 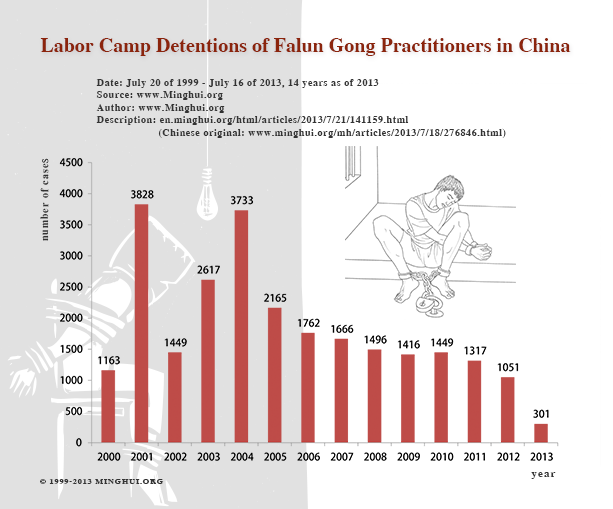 The largest number of cases were reported in 2001, the same year that the communist regime staged the Tiananmen Square self-immolation hoax . The momentum continued through 2004 and began to recede in 2005.

As efforts to expose the brutality became more widespread, and particularly after the publication of the Bloody Harvest report in 2006, the number of new labor camp detentions declined.

China's forced labor camp system started in the 1950s when the communist regime began it's massive suppression of intellectuals and anyone else who held opinions differing from the Party line.

Falun Gong teaches Truthfulness-Compassion-Forbearance. It teaches one to turn the other cheek when being assaulted, to place others before oneself, and to never resort to violence, hatred or anger. Practitioners were thus viewed by the regime as more vulnerable than previous groups “struggled against” (a key component of Marxist theory is that to maintain absolute power, the state must always be “struggling” against one group in society or another; the “enemy of the decade” kind of thing) .

Because of their perceived vulnerability, practitioners were subjected to mistreatment even more cruel and harsh than previous groups. The only things these practitioners were guilty of was their belief in Falun Gong and its principle of Truthfulness-Compassion-Forbearance, or for their efforts to expose the brutal suppression. Some were even sent to labor camp four or five times.

Hard labor is a major component of labor camp detention. The work is often intense and frequently involves close contact with poisonous materials and numerous other workplace hazards. Safety protection is rarely if ever available.

Practitioners who refuse to work or are unable to finish the heavy workload are tortured, brainwashed and otherwise mistreated and abused. The huge illicit profits that come from the slave labor tactics are shared with other law enforcement agencies.

In January of this year, the Chinese regime announced that it would reform or shut down its forced labor camp system. Many labor camps have since begun to release Falun Gong practitioners. For example, most practitioners detained at Xin’an labor camp were set free on July 5, 2013. Beijing Women’s Labor Camp began to release practitioners in May 2013, with virtually none remaining now. Xidayingzi Labor Camp in Chaoyang City, Liaoning Province recently released over 10.

Cases included in this report are limited to those that were obtained by overcoming the information blockage. In fact, the communist regime considers such persecution facts as state secret and made all efforts to cover them up. Minghui is dedicated to collecting such information, making it public, and raising awareness of it. Minghui's faithful and comprehensive coverage offers a credible source for government agencies, organizations, or individuals.

The announced closure of the labor camp system does not necessarily mean the communist regime will stop its brutality against innocent citizens. Rather, it is seen as a strategy to lessen domestic tension and international criticism over labor camp abuses. While labor camp detainees have recently decreased, evidence has shown that communist regime has sent more practitioners to prisons and brainwashing centers instead.

In other words, persecution continues although the methods employed may have changed.

Continued effort and support are needed to expose more details about the persecution including the labor camp system. As more people are aware of the depth and breadth of the persecution, the communist regime will no doubt become closer to meeting with justice for all it has done.

“Statistical Analysis: Labor Camp Detentions over the Past 14 Years”

“A Personal Account of Persecution: "I Didn't Think I'd Ever Get Out Alive!"”