The practitioners explained to passersby how practicing Falun Dafa could benefit them in all aspects of their lives, using their own personal experiences as examples. They also discussed how the Chinese regime kills Falun Gong practitioners to fuel China's lucrative organ transplant industry. After hearing this, many people signed a petition calling for a stop to this most heinous crime against humanity. 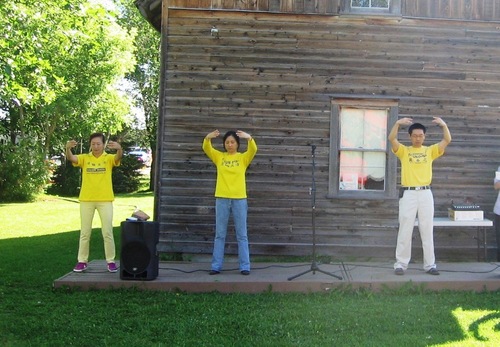 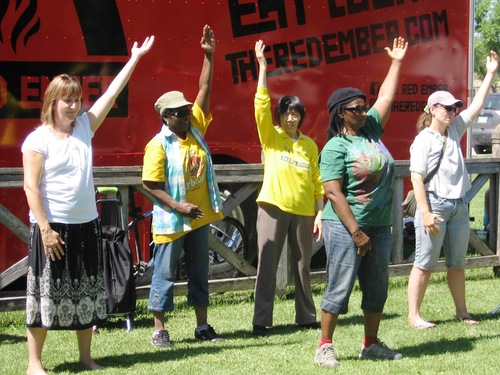 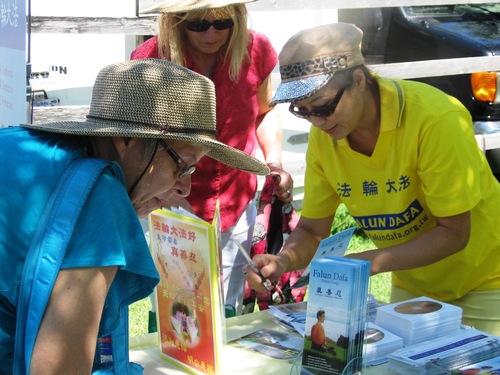 A practitioner talks to people about Falun Gong and the persecution

Many people watched the practitioners demonstrate the Falun Gong exercises, while some learned them right then and there.

A couple who had just returned from China said, “Could you tell us exactly what Falun Gong is and why it is being persecuted?” After the practitioners carefully clarified the facts, the couple took some fliers and DVDs. “We will go through them very carefully,” one said. “We want to make a right choice.”

A practitioner handed a Chinese man a DVD and a flier. The man then called his wife over so that she, too, could learn more about Falun Dafa.

A local community leader, who was already familiar with Falun Gong, walked over to the practitioners' informational table to show her support. She later learned the Dafa exercises.

A local Chinese shop owner walked over to the practitioners' booth and chatted with them, saying that one of his friends in China was a practitioner and that he knew about the persecution. Although he knew that practitioners are good people and that they were being wrongly persecuted, he did not quite understand the true nature of the CCP and its warped culture. After an in-depth discussion with the practitioners, he understood the truth. He later quit the Party and its affiliated organizations.

Many visitors condemned the persecution of Falun Dafa and supported the practitioners’ efforts to end it. Some of them expressed an interest in learning Falun Dafa.