(Minghui.org) During his visit to Sweden on June 1-3, 2013, Yu Zhengsheng, Chinese Communist Party (CCP) Politburo Standing Committee member, also chair of the Political Consultative Conference, saw Falun Gong practitioners' protesting the 14-year-long persecution. Practitioners stood in front of the Chinese Consulate in Gothenburg and in front of the Royal Palace in Stockholm where Yu met with Sweden's King.

Practitioners came out to compassionately remind Yu, “Perpetrators in the persecution of Falun Gong will be seriously punished, no matter where they go or how long it will take.”

Practitioners also held a truth clarification photo exhibit, to call upon the Swedish Government to address the CCP's persecution of Falun Gong. 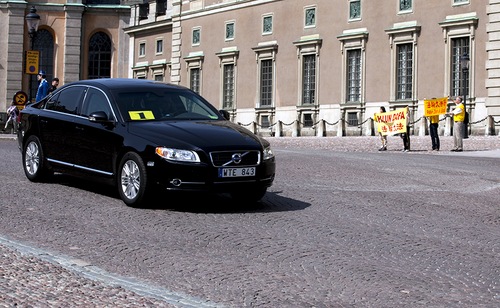 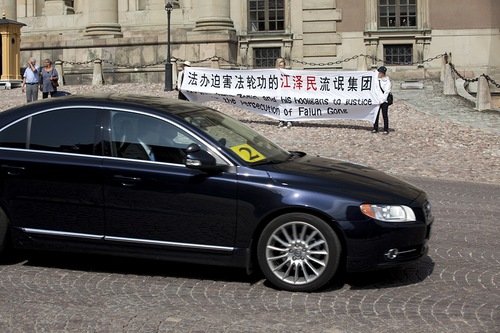 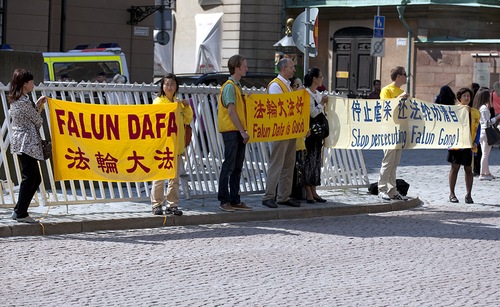 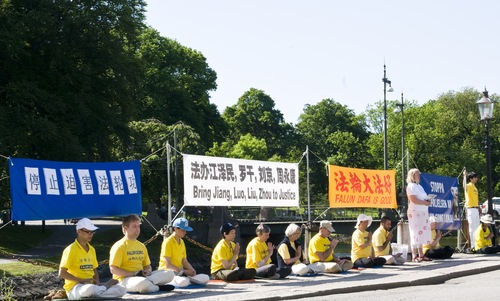 Practitioners peacefully protest the persecution in front of the Chinese Consulate 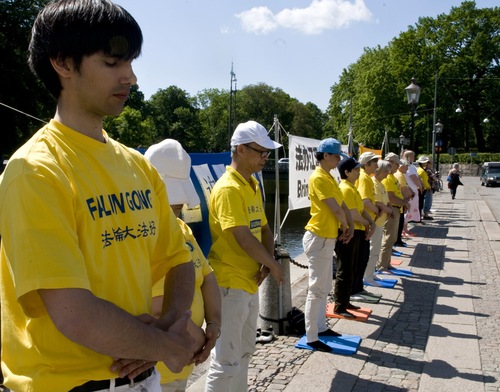 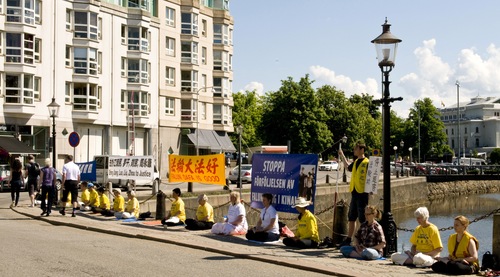 Yu Zhengsheng Actively Involved in the Persecution of Falun Gong

After he was transferred to Shanghai to work as Party secretary in 2007, Yu Zhengsheng continued persecuting Falun Gong. In the run-up to the 2008 Beijing Olympics, Shanghai was one of the places where the largest number of Falun Gong practitioners were arrested in China.

Practitioners arrived at the Royal Palace before 9:00 a.m. When Yu Zhengsheng's motorcade drove by at around 10:00 a.m., practitioners held up banners on which were written, “Falun Dafa Is Good,” “Truthfulness-Compassion-Forbearance,” and “Bring Jiang Zemin and His Hooligans to Justice for the Persecution of Falun Gong.”

Practitioners protested the 14-year brutal persecution and called upon the Swedish Government and people to work together to stop the CCP's atrocities of harvesting organs from living Falun Gong practitioners, and to put an end to the most inhuman catastrophe in human history.

Tourists Learn the Truth and Support Ending the Persecution

Many tourists paused to carefully read the messages on the banners, and some talked with practitioners. One lady told a Western practitioner in English that she had learned about Falun Gong in Hong Kong. “I'm happy to see you here! You've done a great job to protest this way and also tell others what the truth is!” she said.

A man read the message on the banners and then said in English, “I agree!”

Swedish police officers were friendly with these peaceful protestors. They smiled at practitioners and read the banners. They allowed practitioners to stand in highly visible locations to display their banners, and would not let anyone interrupt them.

When the CCP delegation's motorcade left the royal palace at around 11:00 a.m., they once again passed by the practitioners' banners.

A Message to Yu Zhengsheng and Related Evildoers

The activity coordinator said, “We are here to pass a message to Yu Zhengsheng. The Criminal High Court of Argentina remanded a case to the Federal Court of Criminal Appeals on April 17, 2013, ordering it to reopen the trial against the former CCP Party chief Jiang Zemin and deputy head of the 610 Office, Luo Gan. The two have been charged with the torture and genocide of Falun Gong practitioners in China.”

“Perpetrators in the persecution of Falun Gong will be seriously punished, no matter where they go or how long it takes.

“We hope that the perpetrators will expose the evil deeds committed behind the scenes to atone for their crimes in order to secure leniency at the final judgment.”

“Cang County Court in Hebei Province Sentences Mr. Sun Yuqiang--Supporters Give Their Signatures and Fingerprints to Rescue Him”