A Song for the World: Interview with Singer Drew Parker (Photos)

(Minghui.org) Drew Parker is a popular singer and songwriter from Canada. His Falun Dafa-themed song “Mother China” received honorable mention in the 2010 Billboard World Song Writing Contest and ranked in the top 500. His album “On My Way Home,” which includes “Mother China,” made it onto the 2009 Grammy Awards entry ballot. 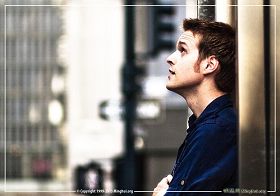 Drew graduated from the University of North Carolina at Greensboro with a computer science degree and is now a video game software designer. He and his wife, along with their three lovely children, live in Toronto, Canada.

Born into a musical family, Drew has been sharing his talent and passion for music on stage since he was young. At the celebration of the 21st anniversary of Falun Dafa’s introduction to the public in front of Parliament Hill in Ottawa on May 8, 2013, Drew performed a song titled “Changed in the Maze,” in which he wrote about how Dafa cultivation has changed his life. 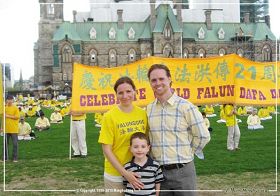 Drew, his wife and their son in front of Parliament Hill in Ottawa on May 8, 2013.

Changed in the Maze

Drew started Falun Dafa cultivation in 2000 while he was still in college. A young man with a keen interest in traditional Chinese culture and spirituality, he happened to come across the Falun Dafa website while surfing online. After he finished reading Zhuan Falun, he realized it was exactly what he had been looking for:

“What struck me the most at the beginning was Dafa’s emphasis on the principle of Truthfulness-Compassion-Forbearance that one should follow to be a good person. The very first time I read Zhuan Falun, I got a strong feeling that Dafa is so pure and sacred. I'd tried many other spiritual things in the past, yet never had this feeling. Unlike other [qigong] schools, Dafa is totally free of charge, yet what it gives me is priceless.”

Soon, Drew found himself changing from the deepest layers within:

“I'd read a lot of books in the past, but none of them seemed able to change me. I still had trouble controlling myself whenever there were conflicts. I used to be a quick-tempered person who appeared nice but would fly into a rage when annoyed.”

“What is most miraculous about Dafa is that it really has the mighty power and virtue to change people’s hearts, since it is not just a concept. Whenever I run into conflicts, the first thing on my mind is Dafa principles, and naturally I can control myself and calm down. I always wanted to become a friendly and peaceful person, and Dafa is making my dream a reality. I’m getting closer and closer to being the type of person I desire to be.”

Singing was once Drew’s whole life, but it also brought him a lot of anguish:

“When a singer performs on the stage, he always wants to bring happiness to his audience. However, I found that for the most part I was trying to show off my talent and as such often felt anxious about the results. When the performance didn’t go so well or smoothly, I’d throw a tantrum at my team. I always felt it was other people’s fault. I worked hard for my reputation and fame, and my obsession with perfection bothered a lot of people. I didn’t know why I had to behave that way.”

“After my Dafa cultivation, the answer gradually became clear to me. My problem resulted from my lack of confidence. I always felt that I wasn’t a good enough musician. I knew that only through cultivation could I change myself.”

As he kept cultivating and improving his xinxing, Drew finally got rid of his show-off mentality and constant desire to get attention:

“This was a wonderful change in my life. Now I sing with a pure heart, and I only think of my audience. I hope to help them with my songs, and I am no longer the old me who only wanted to feel good about himself.”

As a composer, Drew feels that the most important part of a song is a good theme, one that resonates with the audience and brings light and hope to them. “Changed in the Maze” is one such song, which he uses to share his wonderful experiences in Dafa:

“I was once deeply mired in personal troubles, and there seemed no way out. I always failed to control myself during conflicts with others and thus caused tremendous harm to my family. I’m sure many people have similar experiences. Nobody wants to live that way, but somehow they have trouble mitigating conflicts, which eventually spiral out of control. The end result is everyone is angry and sad.”

“We all want to be saved but see no miracle happening. Can you imagine that kind of helpless and desperate situation? For a long period of time I lost any sense of shame and saw my hope shattered. I doubted if I’d ever recover and bounce back. ‘Changed in the Maze’ is an accurate depiction of what happened to me.”

“It is Dafa that changed me and saved my family from breaking up. Everything that I was about to lose came back to me, and the endless worry and anguish were gone. I saw light in my life again. What a wonderful thing to be saved in despair! Falun Dafa is good! It changed me in the maze.”

Mother China, Please Tell Me Why all This Happened to You?

Drew was extremely shocked when he first learned of the brutal persecution of Falun Dafa (also known as Falun Gong) practitioners in China:

“People [are] killed for practicing Falun Gong and following Truthfulness-Compassion-Forbearance just like me? I was in disbelief and had to check the news online every day to see if there was a turn for the better. When I saw the death toll growing, I knew everything was true. Reading about the victims’ plights pained my heart and made me cry.”

Being jealous that the number of Falun Gong practitioners in China exceeded the number of Communist Party members, then Party chief Jiang Zemin launched the nation-wide crackdown on Falun Gong in July 1999. Under his policy of bankrupting practitioners financially, ruining their reputation and annihilating their physical bodies, hundreds of thousands of practitioners were sent to forced labor camps and prisons, where they were tortured and injected with unknown substances.

Drew explained: “The state-controlled media fabricated one lie after another to fool the Chinese citizens. Every day we see innocent people harmed. It is not a new tactic for the Chinese totalitarian regime to pit one group of people against another one considered 'outlaws.' Several decades ago, Hitler used the same tactic and killed 6 million Jews. It’s extremely important to tell China and the world the truth of the persecution.”

In order to appeal to the Chinese regime to stop the persecution, some Western practitioners made the long journey to Beijing to have their voices heard. On February 24, 2002, Drew stood on Tiananmen Square and unfurled a banner reading, “Falun Dafa is good,” together with over 40 other practitioners from the United States, Canada and Europe. They were met with beatings, detention and, eventually, deportation.

Upon returning home, Drew began to use music to inform people of the persecution that is still happening in China today. In 2004, he composed a song called “Mother China,” in which he wondered why Falun Gong practitioners were being framed, defamed and even killed for upholding benevolent traditional values.

On September 18, 2005, Drew performed another song on the subject, titled “Child, I’ll Take You Home,” at the Orphan Rescue Concert held at Sanders Theatre at Harvard University. Many people were moved to tears. 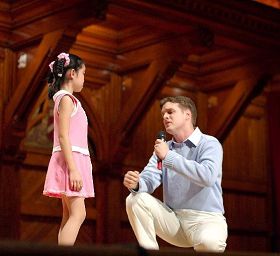 Drew said: “Falun Dafa teaches people to follow the principle of Truthfulness-Compassion-Forbearance to conduct themselves. Even if a person cannot commit to cultivation, he can still benefit from following this principle. Attack on this principle equates to telling people to be bad. No wonder no one in any normal society ever agrees with the persecution of Falun Gong. They all think it’s too crazy to persecute such a group of people who work hard to be good.”

“Chinese people are deprived of the right to be good and are persecuted instead. This is scary injustice.”

Looking Forward to the Day When Everything is Renewed

Drew once sang a song composed by another practitioner, called “When Seawater Turns Sweet.” The soul-searching lyrics hit home with many people; they couldn't help but shed tears.

Drew’s deep voice and excellent delivery has further made this song a favorite piece for many:

Seawater is so salty, but why, oh why?
A poet quietly replies,
"It’s from thousands and thousands of tears,
bitterness and suffering for ages and years.

I look forward to the day,
when seawater turns sweet."

When all good people all over the world,
Together, finally, have made it through
to the spring in which everything
everything is renewed.

Why is sea water so salty to the tongue?
It's said a sage left this answer once,
"It's from Buddha's tears of compassion,
Because of all his lost children.

I look forward to the day,
When seawater turns sweet."

When all good people all over the world,
Together, finally, have made it through
to the spring in which everything
everything is renewed.

This song depicts the struggle of lost souls during the seemingly endless reincarnations and shows their desire to return to their true home. It also reminds people that we were all once beings in higher realms, and that Gods and Buddhas have never given up on us and are awaiting our return.

Drew and Falun Dafa practitioners all over the world are working diligently to wake up lost souls. We all look forward to the day when the persecution ends and everything is renewed.

“More on the Case of Mr. Zheng Xiangxing - Violence Continues Against Him and His Family Despite Public Outrage”