(Minghui.org) The City of Glasgow played host to Scotland's largest cultural event of the year on May 31, 2013, the West End Festival. Over 100 organizations, arts groups, and local and international artists participated in the wildly popular event.

The festival, which featured diverse programs ranging from talks, workshops and exhibitions, to music, theatre, and arts performances, will run until the end of June. 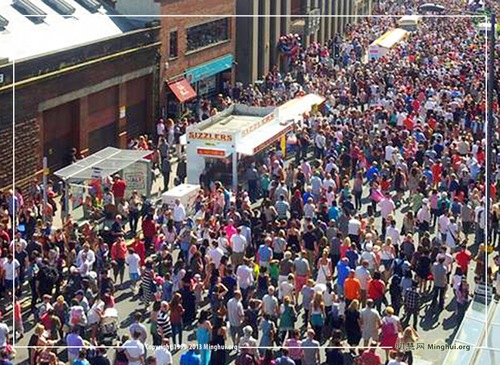 Crowds flock to the West End Festival in Glasgow 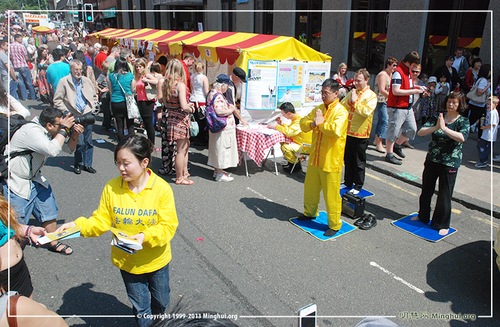 Practitioners demonstrate the exercises and pass out flyers

Revelers were attracted by the practitioners' peaceful music and gentle exercise demonstrations. A large crowd quickly gathered around the Falun Gong booth. 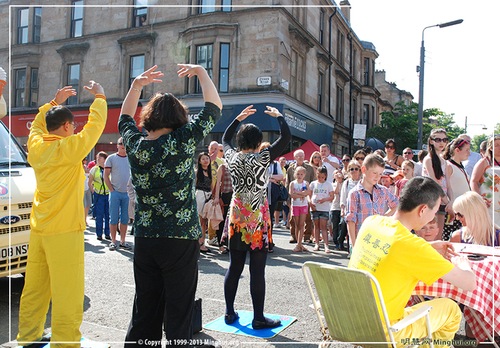 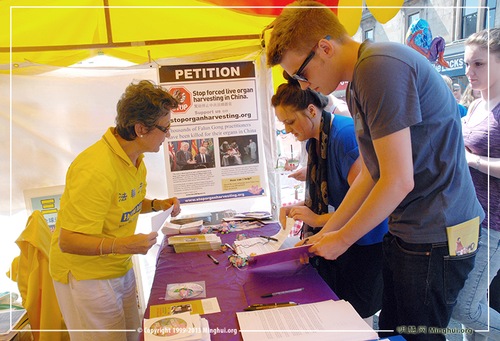 Posters depicting the brutal persecution of Falun Gong lined the inside of the Falun Gong booth. There was also a petition urging British MPs to attend a hearing opposing the Chinese Communist Party's practice of forced live organ harvesting.

Some practitioners stood in front of the booth and talked to passersby about Falun Gong, while others walked along the street passing out flyers.

People who had just learned about the persecution condemned the Chinese communist regime and signed a petition urging U.K. government officials to help stop the persecution in China.

Quite a few Chinese people listened to the patient explanations about the Party from practitioners, and decided to do the three withdrawals.

One practitioner prepared beautiful cards with the words, Truthfulness-Compassion-Forbearance at the top. He then wrote the Chinese equivalent of each visitor's name, according to their phonetic similarity.

Despite the scorching sun, people waited patiently in a long line to obtain their Chinese names. Some people took photos, and many showed an interest in learning the five Falun Gong exercises.

“Ms. Chen Manxin from Beijing Displaced for Months as a Result of Persecution”