(Minghui.org) For the past ten years, Australia resident Li Jing has been clarifying the truth in Brisbane's Chinatown. Each day, she waits until the last bus of Chinese tourists leaves the area, then heads home to make phone calls to China. Since 2008, she has persuaded over 6,000 people to withdraw from the Chinese Communist Party (CCP) and its affiliated organizations. 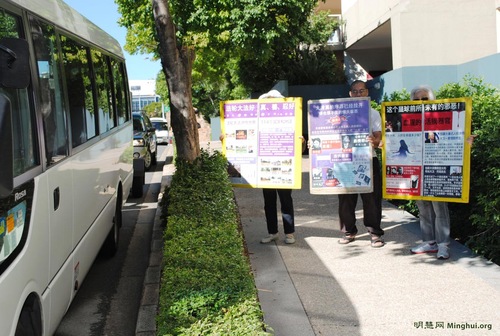 Explaining the Facts Without Fear

Ms. Li, who is nearly 70 years old, immigrated to Australia many years ago. “I used to have high blood pressure,” she explained. “My doctor told me that I would die if I stopped taking my medicine. I also had arthritis, nervous colitis, chronic diarrhea, and heart disease. In 1997, all my illnesses disappeared after practicing Falun Gong. I've never needed to take any medicine or see a doctor since then.”

She said that after reading the book, Zhuan Falun, every question that she ever had about life was fully answered. She had finally understood the principles of the universe.

When the CCP began persecuting Falun Gong back in 1999, she felt very sad. She knew that the Chinese regime had led public sentiment against Falun Dafa and that it was her duty to explain the facts and expose the Party's lies.

Ms. Li said, “Nearly 100 million Chinese people had benefited from Falun Gong within seven years of its being introduced to the public. People everywhere were following Truth-Compassion-Forbearance in their actions and trying to be good people. What's wrong with that? The then-President of China, Jiang Zemin, became jealous of Falun Gong's popularity and initiated the persecution of the practice. The Party used the entire force of the state-run media to frame and slander Falun Gong, including staging the Tiananmen self-immolation hoax.”

When asked why she would willingly endure even the harshest of weather conditions to tell people the truth about Falun Gong, she replied, “I have greatly benefited from the practice, thus I can not stand idle while the CCP spreads lies and misleads people about Falun Gong.”

“From the very first day of school,” she said, “the Party instills its warped ideology into every student. For example, throughout China's 5,000-year history people believed that a person would be rewarded for doing good things and that one needed to be a good person.

“However, the communist Party promotes lies, violence, struggle, and atheism. It does not allow people to believe in God or Buddha. Thus, it has damaged traditional Chinese culture. It persecutes Falun Gong and makes it a crime to believe in Truth-Compassion-Forbearance.

“Many people have been misled by the regime's lies and thus have a wrong understanding of Falun Gong. These people can not discern right from wrong so their very lives are in peril. Thus, we must stand up to the Party and help people learn the facts.”

“Quitting the CCP is Moving Away from Politics!”

Some people have accused Ms. Li of getting involved in politics by promoting withdrawal from the Communist Party.

“The Party forces people to join its ranks and pledge allegiance to it for their whole lives,” Ms. Li explained. “This pledge or oath is recorded in the heavens and should not, under any circumstances, be taken lightly.

“If a person does not withdraw from the CCP and its affiliated organizations, then, when heaven destroys the regime, those who are a part of it will go down along with it.

“This is a critical time in history, thus it is imperative that the Chinese people renounce the Party. This is why we promote the withdrawals. Actually, quitting the CCP is moving away from politics!”

Seeing practitioners holding banners and explaining the facts at scenic sites in Brisbane has given many Chinese tourists a feeling of hope for the future. Some read the Dafa-related materials and renounce the communist regime right then and there. Some say, “Falun Dafa is great!” Ms. Li said she has had many touching experiences while explaining the facts in Chinatown.

One rainy day, a young tourist from China said to Ms. Li, “I've been looking everywhere for you Falun Gong people. After visiting many tourist sites, I've finally run into you!” He said that he supported Falun Gong.

Sometimes tourists who knew the truth would step off their tour bus and shout, “Falun Dafa is great!” Once a tourist in his 30s praised the practitioners for exposing the crimes of Jiang Zemin, the instigator of the persecution.

Ms. Li said that she would continue clarifying the facts until the persecution ended.