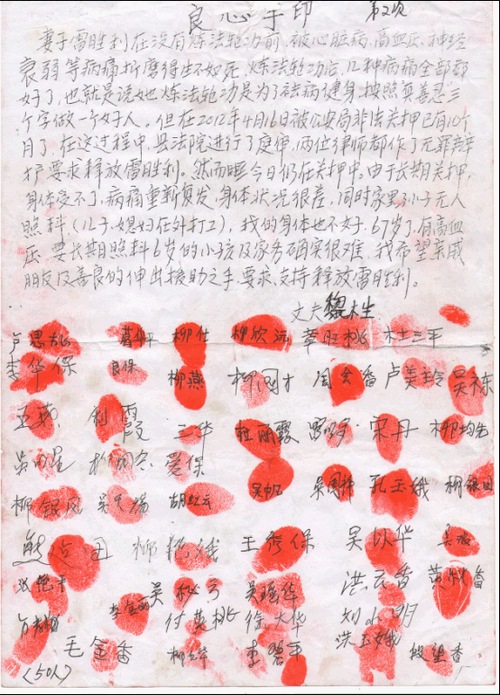 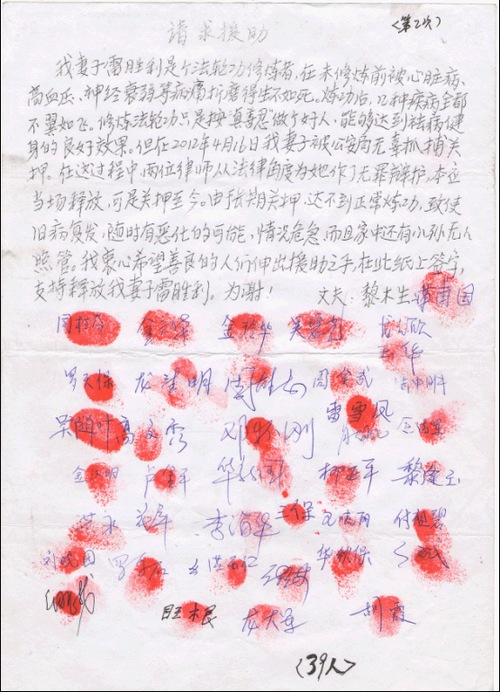 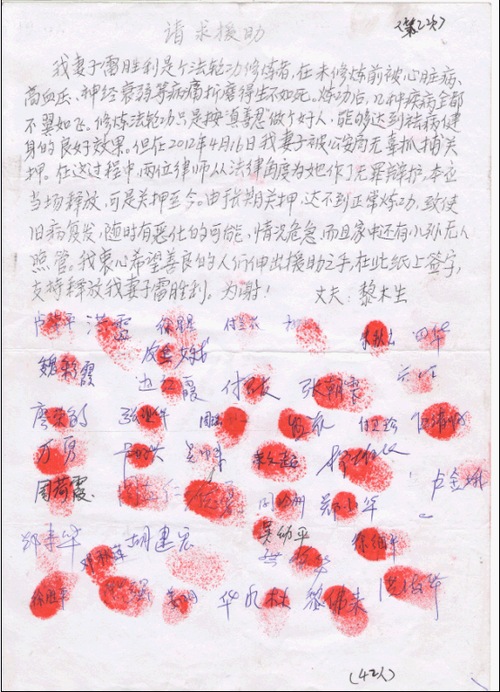 Ms. Lei Shengli, 58, who lives in the Baota District of the Xiushui Neighborhood, Junshui Township, Tongcheng County, is affectionately called “Mother Lei” by the neighbors. In the past she suffered from a heart condition, neurasthenia, and her hands and legs would often cramp. After she began to practice Falun Gong, all of her ailments disappeared.

Over the past fourteen years of persecution of Falun Gong practitioners by the Chinese Communist Party (CCP), Ms. Lei has been arrested by the Tongcheng Domestic Security Team and the local police five times. One arrest led to a two-year detention in the Shayang Forced Labor Camp between 2002 and 2004. The property and cash the police seized or extorted from Ms. Lei and her husband, plus their wages that were withheld, totaled over 100,000 yuan .

On April 16, 2012, Ms. Lei was again arrested from her home by Domestic Security officers Li Chenggang, Hu Hanxiong, and Zhang Dinger, Baota District administrator Bao Baoren, and Xiushui Neighborhood Association accountant Ge Wanglong, and taken to the Tongcheng County Detention Center. Her arrest was approved on May 16, 2012, and she was prosecuted on August 21 by the County District Procuratorate.

On September 7, 2012, the Tongcheng County Court tried Ms. Lei at the Wulizheng Courthouse. At the trial, two attorneys pointed out that it was entirely legal to practice Falun Gong in China and they entered a not guilty plea for Ms. Lei. They emphasized that to produce and distribute Falun Gong informational materials was nothing but the practitioners’ upholding and executing their legal rights, granted by the Chinese Constitution. The attorneys said that whether the case was tried on moral principles or legal evidence, Ms. Lei was innocent. But the court nonetheless sentenced Ms. Lei to three years in prison. She appealed, and the Xianning City Intermediate Court set the appeal date as March 19, 2013. Later, the court abruptly canceled the appeal date.

Ms. Lei Ill after One Year in Detention

Ms. Lei has now been detained for twelve months. Because she has been unable to do the Falun Gong exercises, she has developed symptoms of serious illness. The Tongcheng County Detention Center was willing to release her, but the Tongcheng County 610 Office and the Prosecution and Judicial branches would not let her go.

Furthermore, Tongcheng County Domestic Security Team Captain Li Chenggang is a relative of Ms. Lei's, and he abused that relationship to deceive and arrest Ms. Lei. When Ms. Lei’s sister, Lei Shengping, went to Li Chenggang's home to ask for Ms. Lei's release on March 21, 2013, Li immediately shut the door behind her and beat her up. He then called the local 610 Office and complained that Falun Gong practitioners were harassing him at home. When Lei Shengping went to Li’s workplace the next to complain about the physical abuse, she was told by the people there that she should not have gone to Li's home in the first place to seek justice for her sister.

The illegal actions of the 610 Office, the Prosecution and Judicial branches, and the Political and Legal Affairs Committee have outraged the citizens of Tongcheng County. Many of them have stepped forward and voluntarily fingerprinted a petition calling for Ms. Lei's release.

While signing the petition, many people commented: “The police are really bad. They detained an older lady for a year, which caused her to become ill. Then they won't let her go even when the detention center verified the severity of her condition.”

Ms. Lei is still being held at the Tongcheng County Detention Center.

“How I Helped a Police Officer Withdraw from the CCP”