(Minghui.org) During Chinese President Xi Jinping's recent visit to the United States, Falun Gong practitioners came out to peacefully protest the 14 years of persecution of the practice in China.

Local media were also on hand to provide wide coverage of these events. 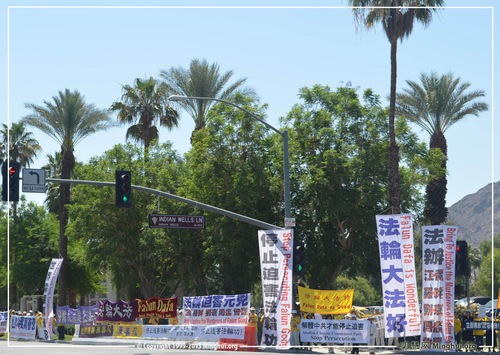 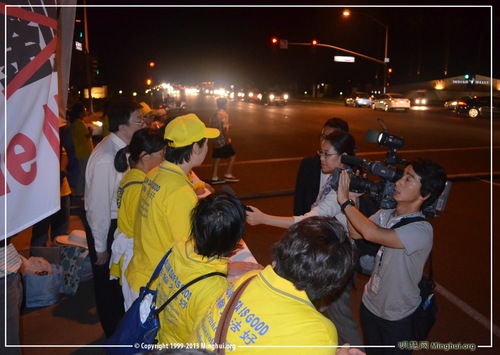 In the June 8 edition of the Los Angeles Times, a reporter interviewed some of the protesters as they held banners calling attention to the persecution along Xi's motorcade route.

The practitioners of Falun Gong, a spiritual practice based on the principles of Truthfulness, Compassion, and Forbearance, had waited all day in the hopes of sending a message to the Chinese leader.

“Falun Gong helps us to reach a peaceful mind,” said Lily Yu, a freelance journalist from San Francisco who works for Chinese-language media. “Life becomes more harmonious. But in China, the practice can lead to arrest, labor camps and torture.”

The author quoted another practitioner, Xiao Wang, who described some of the oppression back in China. Her father had been sentenced to four years in prison. When last seen, the retired judge had withered away, having lost more than thirty pounds and being barely able to walk. She said that she attended this event to speak up for her father.

Forty-nine-year-old Zhenbo Chen said through a translator that she had spent 18 months detained in a labor camp. When she was ordered to write a statement renouncing Falun Gong, she refused, and was then handcuffed with her arms spread to an open window for seven days without food or water.

“I must survive,” she told herself, “and I must go on with life. I want to tell the whole world what happened to me in this labor camp.”

Ms. Chen looked very peaceful sitting on the grass beneath a tree with her legs crossed. She had been an accountant corrupted by the power that had come with her position. Falun Gong transformed her: her quick temper evaporated, as did her stress. Her health improved, and she came to terms with her imprisonment.

"Yes, I have forgiven them,” she said of those who detained her and the guards who mistreated her. “I don't hate them. I pity them.”

The author noted that Ms. Chen was not as quick to forgive the Communist Party and China's leaders, but was still hopeful that President Xi would listen to their plea for justice.

On June 7, KESQ TV news reported that hundreds of people were expected to attend rallies near Bob Hope and Gerald Ford drives on the occasion of Chinese President Xi Jinping's visit to the U.S.

The report stated that a number of Falun Gong practitioners—a group that is persecuted by the Chinese government—were among those gathering near Palm Springs International Airport, where President Obama would also arrive.

The practitioners started demonstrating Thursday at 9 a.m. on Bob Hope Drive, wearing yellow shirts with the movement's principles—Truthfulness, Compassion, Forbearance—printed on the back.

They performed their five sets of exercises behind the barricade.

“One of the organizers, Vicky Jiang, said group members came from around California and Arizona, and some had suffered in China for practicing Falun Gong. 'The goal is to convince Xi and other leaders to stop the persecution'—which allegedly includes torture, organ harvesting and labor camps—'and hold those responsible accountable.'

“'We would like President Obama to consider human rights in his conversations with President Xi and put that on the table,' said Jiang, who came from San Francisco.”

The report stated that another practitioner, Dafang Wang, who also came from San Francisco, said she, her younger sister and older brother were detained and tortured for practicing Falun Gong in China 12 years ago. Her sister was tortured to death four months later at a labor camp, and her brother is still in prison.

"My younger sister was a very, very kind woman. She always wanted to be a good person but she was killed for her beliefs,” Wang said.

Ms. Wang said guards used electric batons to shock her at a Beijing detention center, but she eventually got out with the help of her husband and a guard sympathetic to Falun Gong. She reached the U.S. on a tourist visa, then applied for asylum.

"I want to appeal to Obama and Xi to end this persecution in China. There are many, many cases like my family, my brother and sister, happening every day,' she said.

KMIR TV On June 6, KMIR TV reported that a group of Falun Gong practitioners had gathered outside Sunnylands to protest during President Xi Jinping's visit, because the Chinese government is systematically killing its followers and they want it to end.

Falun Gong became very popular in the 90s, leading then-President Jiang Zemin to launch the persecution in which thousands of innocent people have been killed.

“I experienced three days of sleep deprivation. They force-fed me when I was on hunger strike with a rubber tube and there was blood everywhere.” Ms. Ma said she was abducted twice and put in a concentration camp, where she experienced unspeakable things, such as being hung up by her wrists, with her feet barely touching the ground.

"Falun Gong believes in truthfulness, compassion and forbearance, and that is the opposite of what the communist regime believes in China,” said Ma.

Ms. Ma said that having the two presidents meet on American soil was the perfect opportunity to bring change, because this country stands for democracy and freedom. “I really want President Obama to stand up for those principles and urge president Xi Jinping to stop the persecution of Falun Gong.”

The Desert Sun Newspaper A June 7 article in The Desert Sun reported that about 100 protesters, all dressed in yellow, gathered to show their support for Falun Gong, a spiritual practice that was outlawed by the Chinese government in 1999. Instead of shouting, chanting or cheering, the group performed a series of meditative exercises that are central to their belief.

“Lear Zhou, 39, who is originally from Shanghai but moved to San Francisco two years ago, said he joined the protest because the Chinese government had imprisoned four of his friends for their Falun Gong beliefs. One of his friends was left so frail that he died soon after his release from a labor camp.

“'It was the persecution that caused his death,' Zhou said as he walked along the edge of Bob Hope Drive, preparing to protest.

The article went on to explain that according to a report released by the United States Commission on International Religious Freedom, more than 3,500 practitioners have died as a result of persecution over the past fourteen years. The U.S. Department of State has noted that as many as half of the officially reported inmates in China's labor camps are Falun Gong practitioners.

“In more recent years,” the report continued, “the Chinese government has been repeatedly accused of harvesting organs from Falun Gong prisoners. During a news conference Thursday, a representative of Doctors Against Forced Organ Harvesting, Dr. Dana Churchill, said the Falun Gong were victims of 'a genocide.'”

“It is one of the most evil practices that one can think of. This is killing people for their spiritual beliefs, and organ harvesting live people — they are alive,” Churchill said.