(Minghui.org) May 2013 marks the 21st anniversary of the introduction of Falun Dafa to the public by Mr. Li Hongzhi, the founder of Falun Dafa. On April 19, 2013, Mr. Garry Litke, Acting Mayor of the City of Penticton, British Columbia, Canada, proclaimed the month of May 2013, to be Falun Dafa Month, honouring Truthfulness, Compassion and Forbearance. 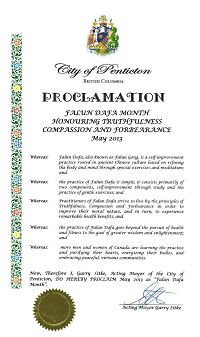 Whereas: Falun Dafa, also known as Falun Gong, is a self-improvement practice rooted in ancient Chinese culture based on refining the body and mind through special exercises and meditation; and

Whereas: Practitioners of Falun Dafa strive to live by the principles of Truthfulness, Compassion and Forbearance in order to improve their moral nature, and in turn, to experience remarkable health benefits; and

Whereas: the practice of Falun Dafa goes beyond the pursuit of health and fitness to the goal of greater wisdom and enlightenment; and

Whereas: more and more men and women of Canada are learning the practice and purifying their hearts, energizing their bodies, and embracing peaceful, virtuous communities.

Now, Therefore I, Garry Litke, Acting Mayor of the City of Penticton, Do Hereby Proclaim May 2013 as “Falun Dafa Month”.