(Minghui.org) On May 12, 2013, practitioners in Calgary, Canada, gathered in Prince's Island Park to celebrate World Falun Dafa Day. They demonstrated the exercises, explained Falun Gong to the public, and told passerby about the Chinese Communist Party's brutal persecution of Falun Gong.

For many Calgary residents, Falun Gong is an integral part of their city. They both accept and protect practitioners who have been persecuted in China. Many people paused to watch the exercise demonstrations. Some children followed along with the practitioners’ hand movements. 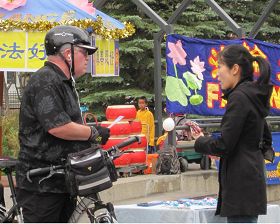 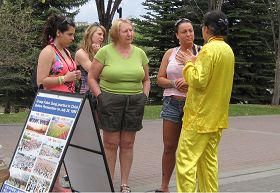 Explaining the facts to passerby

Some who were not too familiar with Falun Gong asked for additional information on the practice. Others started reading through the fliers as soon as they received them. When one lady heard about the miraculous healing effects of the practice and how it helped keep people fit, she exclaimed, “I want to practice Falun Gong, too!”

Many people were shocked when they heard about the Chinese regime's treatment of Falun Gong. They openly admired the practitioners' steadfast efforts to explain the facts. After one lady was given a little lotus flower bookmark with the words “Falun Dafa is great” and “Truth-Compassion-Forbearance” printed on the front, she pinned it to her blouse, then sat down and carefully watched the practitioners. 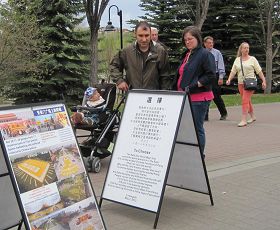 When some people see practitioners' non-stop efforts to clarify the facts and stand up to the Chinese regime's persecution of Falun Gong, it makes them stop and ponder, “Exactly what is the meaning of life?” Montreal resident Savillian is one of those people.

As a graduate student in the Department of Trade and Industry at Calgary University, Savillian said he was interested in Chinese culture and originally heard about Falun Gong about 10 years ago. He told one practitioner during the celebration, “What you are doing has made me consider the meaning of life. I appreciate that. Good luck!”