(Minghui.org) Authors David Kilgour and Ethan Gutmann came to the BBC broadcast centre in London on April 30, 2013 to talk about and answer questions about the Chinese regime's live organ harvesting at a live broadcast on the BBC's World Service program.

Afterwards, they were again invited to the BBC News Centre, and interviewed by the presenter of the 1 p.m. World News live broadcast program, on the topic of organ harvesting in China. The BBC presenter expressed appreciation to Kilgour and Gutmann at the end of interview.

Given the fact that the BBC World News has a large audience and influence, the broadcast of the interview with Kilgour and Gutmann on April 30 provided an opportunity for more people to learn the truth about the persecution of Falun Gong and of the Chinese regime's gross violation of human rights. It also allowed listeners to learn about the severity of the regime's brutal persecution of Falun Gong, especially with respect to the large scale live organ harvesting from Falun Gong practitioners.

This was the first time that BBC radio has conducted an interview that exposes the crime of organ harvesting. The independent investigations of David Kilgour, David Matas and Ethan Gutmann are taking hold among Western societies and among media entities.

In the past two weeks, DAFOH (Doctors Against Forced Organ Harvesting) has held presentations on the Chinese regime's live organ harvesting in many major cities, and in organizations such as the Scottish Parliament in Edinburgh, Oxford University, Cambridge University and the British Parliament. The persecution Falun Gong practitioners are subjected to in China has begun to shake the British political, academic and media fields.

During the BBC live broadcast, David Kilgour and Ethan Gutmann gave clear answers to the presenter's questions, sharing with the public their many years of investigation and concluding that Falun Gong is an innocent, peaceful group persecuted by the Chinese Communist Party (CCP). The CCP does not observe the rule of law, and it's a fact that the CCP is extracting the organs from living Falun Gong practitioners and selling them for huge profits.

Mr. Kilgour mentioned during the broadcast: “The source of organ transplants in China are mainly prisoners of conscience, especially Falun Gong practitioners”; “Our investigation showed that about 65,000 Falun Gong practitioners have had their organs extracted”; “It's completely different from Western laws. During the persecution of Falun Gong, the CCP doesn't observe the law at all, one can be locked up in a forced labour camp for 3 to 4 years simply by a written letter from a police officer”; and, “the organ harvesting from Falun Gong practitioners equates to murder”.

Mr. Gutmann also stressed: “The prisoners of conscience within the system are most likely to become victims of organ harvesting because they don't reveal their names and identities”; “There’s a large number of prisoners of conscience in China and they have been used as a major source of organ transplant”; “China's illegal organ harvesting has involved the whole country's systematic participation.

During the program, Mr. Kilgour emphasized that some Chinese officials say that the organs for transplant in China are from prisoners who were executed, but as a matter of fact, those who have been killed for their organs are mainly Falun Gong practitioners, who didn't commit any crimes, and who are totally innocent. People forget the fact that these are all innocent people. 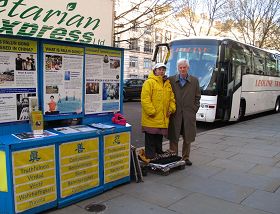 In the morning on the way to the BBC studio, David Kilgour happened to see Falun Gong practitioners holding a 24-hour non-stop peaceful protest activity opposite the Chinese embassy in London. He stopped the taxi and came over to the Falun Gong practitioner who was doing the exercises and had his photo taken with her to show his support.