Munich, Germany: Spreading the Facts about Falun Gong at a Health Expo (Photo)

(Minghui.org) Local practitioners participated in a popular health expo targeting the “baby boomers” generation from April 12 to 14, 2013, in Munich, Germany. They set up a booth to promote Falun Gong spiritual practice and expose communist regime's persecution of Falun Gong practitioners in China.

Many visitors expressed interest in the Falun Gong exercise demonstration and asked how they could learn the practice. 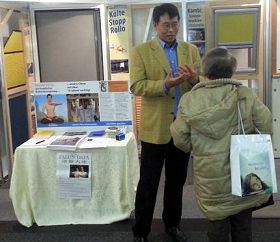 A woman stops by the practitioners' booth to learn about Falun Gong.

Many German people came to know the facts about Falun Gong during the three-day event.

“Peacefully Raising Awareness of Persecution of Falun Gong for 14 Years, Practitioners Continue the Spirit of the April 25 Appeal ”

“Poison Will Always Be Poison—Seeing through the 'Chinese Dream' ”