(Minghui.org) Today's news from China includes incidents of persecution that took place in 11 cities or counties in 7 provinces. According to this report, 11 practitioners were subjected to mistreatment during detention, and at least 7 practitioners were illegally arrested. 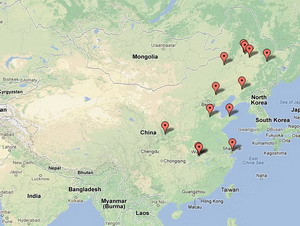 Ms. Zhou Shumei, 55, from Hongkou District, Shanghai, was followed and arrested on February 7, 2013. The warrant for her arrest was subsequently issued on March 6, 2013. She is being detained in the Shanghai No. 3 Detention Center.

Ms. Zhou Shumei's mother is in her 80s and is paralyzed in bed. She depends on Ms. Zhou for care. Ms. Zhou's daughter is in college.

Ms. Zhou was sentenced to six years in prison in 2004. She was held in the Shanghai Women's Prison.

Mr. Xu Wenlong has been tortured by the guards since he was transferred to the Tailai Prison on December 26, 2012. He is being detained in Division No. 16 of the prison. Recently, he was brutally beaten and severely injured by division chief Liu Chunxiao. Liu also confined him to a small cell for more than one month because Mr. Xu refused to write a statement to renounce his belief.

Mr. Zhang Huabin lives in Nianzishan District, Qiqihar. On June 18, 2012, police broke into his home and ransacked it. Mr. Zhang was arrested and sent to the Longjiang County Detention Center. He was later sentenced to three years in prison and is now held in the Tailai Prison.

Mr. Lin Haiqiang from Linjia Village, Xiashi Town, Jintai District, was arrested at noon on March 28, 2013, by officers from the Gaojia Town Police Station in Weibin District, while he was working at a construction site. In the afternoon, six policemen rushed into his home and ransacked it. Mr. Lin was first confined in the Lingyun Hotel in Baoji and then transferred to the Weibin Detention Center on March 30, 2013.

Mr. Lin Guojun and Mr. Feng Yunxue were arrested in August 2011 and have been detained in the Qixia Detention Center for more than 19 months.

The Qixia police sent them to the Jinan Prison for the third time on March 29, 2013. However, the prison refused to accept them again on that day. They were brought back to the detention center

Mr. Lin Yusen from Qixing Mine, Shuangyashan City, Heilongjiang Province, was arrested in Shenyang on the afternoon of March 30, 2013.

Ms. Wu Bilin, 64, from Jiangan District, Wuhan, went out on her bicycle on March 21, 2013. She never returned home. It is suspected that she was abducted by police. Her whereabouts are unknown.

Ms. Yu Jin'e and Ms. Xiang did not go home after they went out on March 30, 2013. Their families asked around and learned that they had been sent to the Edaopeng Brainwashing Center in Jianghan District.

Ms. Sun, Mr. Zhang Jingtian, and his wife Ms. Ma Xiurong, from Xiaolaohugou, Chengde, went to the home of Ms. Wang to study Falun Gong teachings. Seven or eight policemen broke into the home and arrested Mr. Zhang and his wife. Elderly Ms. Sun was sent back to her home. Ms. Wang was not arrested.

The police divided into three groups. One group searched and ransacked Ms. Wang's home. They confiscated a desktop computer, a laptop, a printer, Falun Gong materials, and other belongings. They also threatened and forced Ms. Wang's daughter to write a guarantee statement to promise that Ms. Wang would not practice Falun Gong.

Another group searched the home of Ms. Sun and confiscated Falun Gong materials. They also forced her family member to write a guarantee statement to promise that Ms. Sun would not practice Falun Gong.

The third group carried out the arrest of Mr. Zhang and his wife. They also confiscated a computer, a printer and Falun Gong materials from the couple's home. Mr. Zhang is being held in the Shuangfengsi Detention Center. Ms. Ma Xiurong's whereabouts are unknown.

Officers from the Tonghe Domestic Security Division, accompanied by Wang Hanfu and others from the Nonghe Town Police Station, broke into Mr. Yan Fangjun's home by smashing the glass in the door and arrested Mr. Yan on the evening of March 29, 2013.

Mr. Xu Huaian from Fulin Township was also arrested by the Tonghe Domestic Security Division the next morning.

Another Falun Gong practitioner from Sihao Village, Nonghe Town, whose last name is Zhang, was arrested by the Tonghe Domestic Security Division that evening.

Ms. Qu Shengzhi, 68, from Daqing, was arrested by police while she was outside practicing Falun Gong exercises in Shenyang, Liaoning Province. The police beat her, breaking her leg. Her family were threatened by police when they went to the hospital to visit her.

Ms. Zhou Liying, 51, was taken to a police station on October 8, 2012, because she talked to people about Falun Gong. Several policemen hit and kicked her. The police ransacked her home on the same day and confiscated Falun Gong books and materials and other personal belongings valued at 1,000 yuan.

The police then took Ms. Zhou to the Huolinhe Police Department and confiscated an MP3 player and 850 worth of yuan bills marked with words about Falun Gong from her bag. Li Buhe, chief of Domestic Security Division, and driver Zhang Deli hit and kicked Ms. Zhou again. She was then dragged to the basement and tortured on the tiger bench.

Afterward, the police sent her to a hospital for a physical examination and then transferred her to the Huolinhe Detention Center. In the detention center, guards sprayed her face with chili-infused water, which caused her face to redden, swell and itch. The guards also ordered criminal inmates to monitor and beat Ms. Zhou.

Ms. Zhou was sentenced to 18 months of forced labor about 2 weeks later. Zhang Deli and three other policemen sent her to the Tumuji Forced Labor Camp in the early morning of October 26, 2012. However, the labor camp refused to accept her because of her poor physical condition. She was then released.

“My Father Comes Downstairs and Takes a Stroll Alone after Stroke”