(Minghui.org) On March 20, 2013 Falun Gong practitioners from Sydney, Melbourne, Brisbane, Adelaide, and Canberra held a rally in front of the Australian Parliament in Canberra. Through speeches, banners, eyewitness accounts and torture re-enactments, they exposed the Chinese Communist Party's (CCP) persecution of Falun Gong and the crime of harvesting organs from imprisoned Falun Gong practitioners in China. 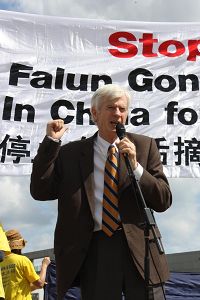 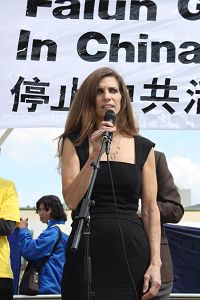 Maria Fiatarone Singh, Medical Professor at the University of Sydney, spoke about the CCP's crimes of organ harvesting 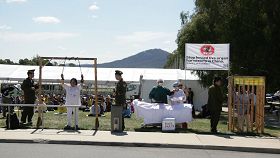 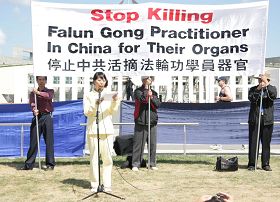 Liu Li, a Falun Gong practitioner, spoke about the persecution that she and her family experienced in China

David Kilgour, former Canadian Secretary of State, Member of Parliament and human rights activist, and Maria Fiatarone Singh, a Medical Professor at the University of Sydne,y addressed the rally after attending a forum with Australian Members of Parliament. Six Falun Gong practitioners recounted their experiences of being persecuted and tortured in China.

David Kilgour has been traveling in Australia for a month, in an effort to pass on the message that legal organ transplantation is not only a moral issue, but also protects innocent people, such as Falun Gong practitioners under persecution in China.

At the rally, six Falun Gong practitioners recounted their personal experiences of being tortured and forced to do heavy labor in China.

Mr. Liu Lianjun was arrested twice because he refused to renounce his belief. He was badly beaten in jail and lost three of his teeth. He was forced to do hard labor 12 hours every day.

Ms. Liu Li told the rally attendees about the persecution that her family members have experienced. Her mother has been arrested five times. Her sister was sentenced to five years. Her husband, Jia Hua, was fired from his job and became homeless in 2001. Their son has not seen his father since then. Liu Li did not hear from her husband until June 2006, when she learned that he had been arrested in Shaanxi, and sentenced to eight years. Liu Li called upon the Australian people to help to stop the persecution.

Liu Jintao was a graduate student at China Shiyou University. He was jailed in Tuanhe Forced Labor Camp, where he was subjected to unspeakable torture. The perpetrators beat him, forced him to curse the founder of Falun Gong, Mr. Li Hongzhi, forced him to sit on a small stool for prolonged lengths of time, denied him use of the restroom for prolonged times, and forced him to watch videos that slandered Falun Gong. After Mr. Liu started a hunger strike in protest, the guards brutally force-fed him.

The torture and abuse became more severe. The perpetrators inserted a stick into his anus and squeezed his genitals. They stuffed feces in his mouth. The guards pulled out Liu Jintao's hair, eyebrows, beard, and pubic hair. In the winter, they poured cold water on his blanket. If Mr. Liu fell asleep, the guards jabbed his fingernails with needles. They ordered criminal inmates to spit on Liu Jintao, and even forced his mouth open and spit directly into his mouth.

Liu Jintao said, “It is really a different world in Australia. I can freely talk about the truth of the persecution. Many Chinese Falun Gong practitioners are still being tortured in China. I hope that the international society can help stop it and bring the murderers to justice.”