(Minghui.org) The Panjiawan Forest Office building in the Chencang District, Baoji City, Shaanxi Province, has been used by the Baoji City Political and Legal Affairs Committee since 2010 to persecute Falun Gong practitioners.

This three-story, yellow office building is located in the Panjawan District. It faces to the west where the gate faces a street. There is an iron gate on the south of the building that opens into a courtyard. The wall on the south side has a long string of posters that slander Falun Dafa. Inside the courtyard is another two-story building facing the south. During working hours, both the west gate facing the street and the south gate are open.

Currently, the Panjiawan Forest Office still uses the first and second floors of this building. According the receptionist, the Forest Office will move to a new building across the street in May. The third floor is used by the Political and Legal Affairs Committee as a brainwashing center to persecute Falun Gong practitioners. 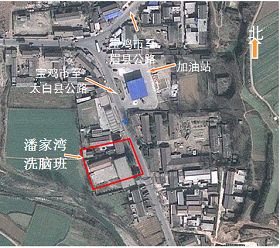 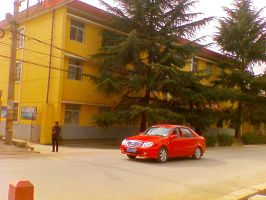 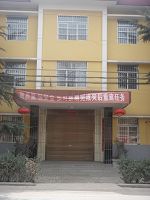 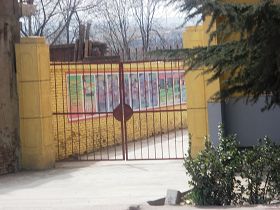 The south gate that enters the courtyard 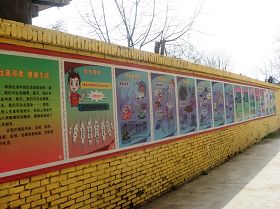 The posters that slander Falun Dafa 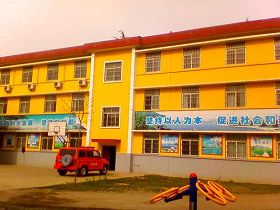 The entrance to the third floor is sealed by stainless steel bars. The sign in the hallway says “Legal Education School in Baoji City,” but all the villagers nearby know that Falun Gong practitioners are detained here. There are five to six rooms in the building. Several rooms contain three beds (one bed for a practitioner, two beds for guards). One room is the section chief office (for three officials), one room is for an “instructor,” one is for a doctor, and one is for the guard for the third floor. There is a large conference room and bathrooms. The Political and Legal Affairs Committee of Baoji City also rents several rooms in the two-story building on the courtyard.

The third floor entrance is barred. The sign says “Legal Education School of Baoji City,” but all the villagers know that Falun Gong practitioners are held here.

The brainwashing center was started in October 2010 by the Baoji City Political and Legal Affairs Committee, which was instructed to do so by the Shaanxi Province 610 Office. It targets all Falun Gong practitioners in Shaanxi Province.

Every day, the brainwashing center played videos that slandered Falun Dafa. They also forced practitioners to read books that slandered Falun Dafa. All the staff here persecuted practitioners in a subtle way. They appeared kind, but actually they were very sinister. Once practitioners tried to clarify the truth, the staff members would immediately get very ugly. A doctor with the last name of Han said, "If you guys do not 'reform,' you will be taken to Xi'an, where the persecution is worse.” Three officials in their 30s or 40s are in the section chief's office. They are active in carrying out the persecution and they have to approve everything. They are probably directly sent by the Shaanxi Province 610 Office.

Not only that, the Baoji City Political and Legal Affairs Committee have participated in the persecution, and many departments in the government are involved. Cars from different city departments come in and go out of the courtyard constantly, including the bureau of civil affairs. The 610 Offices in Baoji City and Shangxi Province visited the place frequently to check the work.

Incomplete list of personnel in charge of the brainwashing center:

Three people in the section chief office, male, in their 30s or 40s.

Policeman Yang Jianbin, male, in his 40s, used to work for the brainwashing center in the Zaozihe Labor Camp.

Address of the brainwashing center:

Other groups that directly participated in the persecution at the brainwashing center:

The Political and Legal Affairs Committee in the Weibin District, Baoji City:

The 610 Office in the Weibin District, Baoji City:

The Political and Legal Affairs Committee in Jintai district:

The 610 Office in the Jintai District, Baoji City