David Kilgour, former Canadian Secretary of State (Asia-Pacific) and Maria Fiatarone Singh, Professor of Medicine at Sydney University, addressed an audience that included several members of the legislature at the NSW Parliament on March 12. 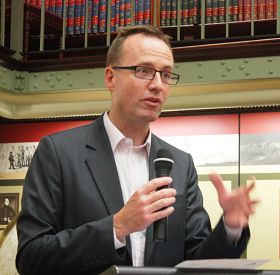 Mr. David Shoebridge, MLC, Member of the The Greens

Mr. Shoebridge proposed the Human Tissue Amendment (Trafficking in Human Organs), Bill 2013, which revolves around amending an existing bill in New South Wales, the Human Tissue Act of 1983. Once passed, the law would make receiving a trafficked vital organ equivalent to manslaughter, and those who violate the law could face up to twenty-five years in prison.

He indicated that donated organs have become more scarce around the world, but in China, an organ can be obtained for transplant in a few weeks. He pointed out that the CCP (Chinese Communist Party) conducts live organ harvesting from detainees, especially Falun Gong practitioners, for organ trafficking.

“We heard some compelling evidence from David Kilgour tonight about the way China in particular is using their prison system,” Mr. Shoebridge stated. “Prisoners who have been held with no criminal charge such as Falun Gong practitioners, who are being held in the criminal system because of their faith, are being effectively used as a large pool of organs to be provided unethically-- in fact in a manner which most Australians would consider to be deeply criminal.”

He continued, “My office drafted an initial Bill to look at this issue. We just finished the initial consultation phase to this Bill to see how Australians respond. I have got to say that we have been overwhelmed by the response. We had the better part of 3000 responses to our Bill, hundreds and hundreds of comments, and extraordinarily strong support for us to do something in NSW.” 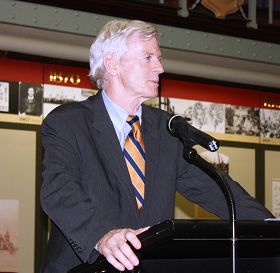 Mr. David Kilgour and Mr. David Matas have been conducting an independent investigation on the CCP’s atrocities of live organ harvesting. In 2009, their co-authored book, Bloody Harvest, exposed that from 2000 to 2005, 67,000 organ transplantations were conducted in China. Among them, the sources of 41,000 organs cannot be explained. In 2012, they published State Organs, which exposes the dangers of going to China for organ transplantation.

Mr. Kilgour said, “David Matas and I found 52 kinds of evidence of the nature of this atrocity since 2001. You may say, 'well, give me one.' The one example that I often use is from Sujiatun, Liaoning Province, where Bo Xilai was the governor. I met a witness who told me that her husband was a surgeon, and he has removed 2,000 corneas from the eyes of Falun Gong practitioners in Sujiatun over a two year period in 2003.”

Mr. Kilgour hopes that every government would implement legislation on organ trafficking and stop this human rights atrocity.

A Professor at the University of Sydney: “The CCP Systemically Conducts Live Organ Harvesting” 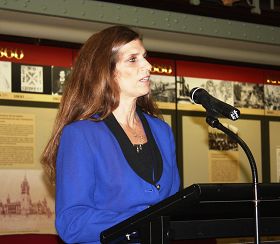 Professor Singh of the University of Sydney

“As you may know, doctor Huang Jiefu is a liver transplant surgeon. He is not only Vice-minister for Health, but a world-renowned liver transplant surgeon. He returned to China from his training at the University of Sydney to continue the practice of unethical organ harvesting from detainees for many years afterwards, both before and after his promotion to Vice-minister of Health in 2001. He officially denied this practice up to 2006, which was when investigations of Mr. Kilgour and Mr. Matas made it impossible to cover up any longer.”

Later, Prof. Singh said during an interview that although organ trafficking occurs in other countries, including India and Pakistan, the CCP uses state machinery to conduct illegal organ trafficking. She said, “That's why we call it the 'national plunder of organs.' The CCP systematically implements the organ plundering. They take advantage of the hospital system, with the cooperation of the police departments nationwide.” She believes that maintaining silence is only helping organ harvesting to continue and expand.

When a Person Goes to China for an Organ Transplant, Innocent People Are Killed

Jonathan Richard O'Dea, a member of the NSW parliament, said that from his perspective, he supported restricting Australians from going abroad for organ transplantation. He said he put forward the bill a few years ago in the NSW parliament, “There were two issues. One is that legislation is required at a Commonwealth level. Secondly, it has been suggested that the extent of the problem in NSW is actually quite small with only one or two people a year taking part in [transplant] tourism.”

Regarding this, Mr. Kilgour said, “Many years ago I was working as a constitutional lawyer for the province of Alberta. I understand that here, health care delivery is a matter for the State government, but most of the funding for health care comes from the Federal government. Therefore, if there is willingness in NSW for legislation, it is feasible from a legal perspective.”

He continued, "The question is whether only a few people are going [to China for transplants]? At the time of Pol Pot, if you had one Australian and one Canadian at that time who went to Cambodia to get an organ from the killing fields of Cambodia’s back in the 70s, I do not think that anyone would have dared get up and say, there were only a few people going. I believe that people would have said, 'We do not want any people going to the killing fields of Cambodia.'”

He said, “I don’t know how many, but I have been told that people in all the States of Australia are still going to China. We discovered in Canada, from three hospitals, over a two or three year period, that twenty to thirty people had gone [overseas to get organ transplants].”

Professor Singh said, “To say it’s not an issue of huge magnitude to Australians is one thing. But it is of huge magnitude for the number of Chinese people being killed. That’s putting a very different priority on the life of one person over another. It seems entirely unacceptable to me.”

“It’s symbolic as well. Even if only one person goes from NSW, if there is a law against it, at least it makes the statement that NSW has some integrity in this regard and it’s a symbol for the other states and the commonwealth government to follow in their footsteps.”

Mr. Shoebridge said, “I think Jonathan’s idea is what is called in Parliamentary parlance a 'Dorothy Dixer.' You hope to get a response which will assist in the argument rather than challenging it. The evidence I got in my discussion with a renal surgeon, is that they see about half a dozen a year going from our health care system, and very little monitoring from the New South Wales government. So the figure I have got is about half a dozen a year, and if you extrapolate that over five years, you are talking about 30 people getting killed to order as a result of people from New South Wales.”

Member of NSW Parliament: We Must Stop this Crime

John Kaye, from the NSW Greens party and member of the NSW parliament, said, “Over 4,300 people in New South Wales are on dialysis at the moment. If it grows five percent each year, we are the most rapidly growing population in the world for dialysis. We have a particular moral responsibility to make sure that this population does not become a demand source for executions in China.”

“Even if it's a case of only one person going to China from New South Wales each year, I am determined to work on this to save lives, as one life today, in five years time, may be equal to five persons being killed. We have got to stop this crime.”