(Minghui.org) Chilly weather didn't dampen enthusiasm for celebrating St. Patrick's Day in Ottawa, Canada, on Saturday, March 16, 2013. Thousands of residents gathered in the city's downtown area for the annual festivities. The Divine Land Marching Band, composed of more than 80 Falun Dafa practitioners, was the largest group among the 39 entries in the St. Patrick's Day Parade.

The band was formed by Falun Gong practitioners in New York as a way to help show people in North America, particularly Chinese people, the beauty of Falun Dafa. The Chinese communist regime wields great influence in Chinese communities around the world, far beyond the borders of the Mainland, and Falun Gong is routinely demonized in the regime's propaganda.

The band became an effective way to show overseas Chinese the truth about Falun Gong, its beautiful and powerful music piercing the veil of the deceptive propaganda. Further branches of the band were soon formed in major cities around the world, and the band routinely delights crowds of spectators, both Chinese and Western alike. 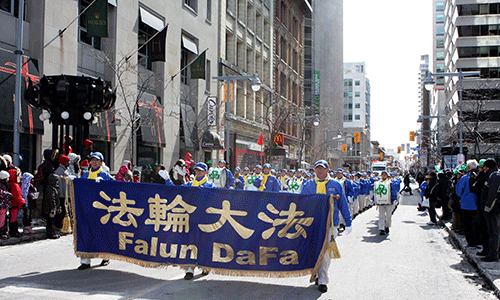 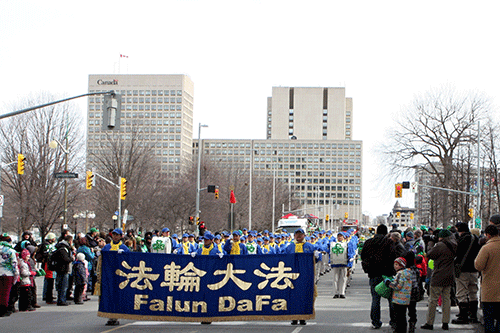 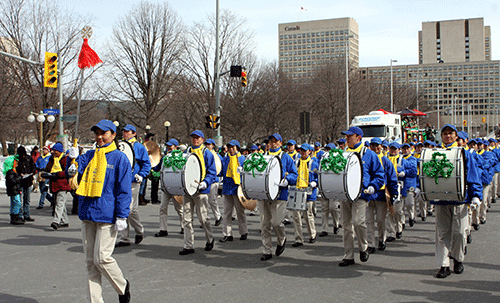 This was the 31st annual St. Patrick's Day celebration in the city, and the fifth time the Divine Land Marching Band has participated in the parade. The marching band first appeared in the event in 2008 and received the "Best Marching Band" award in 2009.

Ottawa's Mayor, Jim Watson, affirmed the band's contribution to the community in an interview. He said that it offered the city an opportunity to celebrate its multiculturalism. He emphasized that participants from all cultural backgrounds were welcomed in the parade.

The Divine Land Marching Band performed a total of five songs. Spectators applauded, waved, and cheered them on along the entire route, as if seeing old friends that they hadn't seen in a long time.

A man from Shanghai watched the St. Patrick's Day Parade for the first time. He was especially impressed by the discipline displayed by the Divine Land Marching Band members. He said he was delighted to “be able to see the wonderful performance of a band composed of Chinese people in a foreign country.”

The youngest member of the Divine Land Marching Band was 16-year-old Angela Chu. She studies at a prestigious high school for the performing arts in Ottawa, majoring in clarinet performance. Angela began learning to play the clarinet when she was 6 years old.

Angela said that playing in the Divine Land Marching Band provides her with opportunities to improve her skills, and at the same time to apply the skills she has learned in school to benefit the community. She and her mother have participated in every St. Patrick's Day parade in Ottawa that the band has played in.

“I felt very cold at the beginning [of the parade]. My hands were a bit numb,” Angela said with a smile. “During the parade, my hands became warmer and warmer. Now I'm not cold at all."

“Clarifying the Truth to a Policeman in China Over the Phone”