Canada: Seminar on Forced Organ Harvesting in China Held at the University of Manitoba

(Minghui.org) A seminar seeking to raise awareness about the forced organ harvesting from Falun Gong practitioners committed by the Chinese Communist Party (CCP) was held on the afternoon of February 1, 2013 at the University of Manitoba, Canada. More than 50 students and teachers attended. The seminar was jointly initiated and organized by five departments and research institutes of the university, including the Faculty of Social Work, Department of Sociology, Asian Studies Center, Arthur V. Mauro Center for Peace and Justice, and the Center for Human Rights Research.

The University of Manitoba, founded in 1877, is Western Canada's oldest university. The seminar is one of the recent campus activities in which the Falun Gong Student Group has participated. 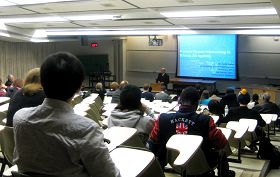 Seminar raising awareness about the CCP's forced organ harvesting in China held at the University of Manitoba, Canada

David Matas, a renowned human rights lawyer, gave a 45-minute report. He is one of the two chief researchers who co-authored an investigative report on the allegations of organ harvesting from living Falun Gong practitioners. With detailed and reliable information and rigorous analysis, Mr. Matas brought the crime of forced organ harvesting orchestrated by the CCP to the attention of the scholars and students.

He proposed 12 concrete steps to stop the crime of forced organ harvesting, including the following: Canada should set forth norms and regulations for citizens who receive organ transplants overseas, Canada's laws and procedures against torture should be improved, and diplomatic immunity for criminals who have committed crimes against humanity should be reconsidered. These are the most complete and feasible proposals on how to create an external force from the international community to bring an end to forced organ harvesting and the persecution of Falun Gong. Related countries, organizations and individuals who are concerned about and determined to make a difference, can take these points as a reference.

After Mr. Matas' speech, some attendees raised questions about the persecution of Falun Gong, some shared their experiences or stories in China, and some said that similar crimes of forced organ harvesting have also occurred in other countries and regions. But such state-organized and systematic practices in China are particularly horrifying, and the level of harm caused to the victims is outrageous.

Many attendees signed the written proposal to the Canadian government to urge the government to take action to stop the human rights abuses. Some teachers and students left their names and contact information for future cooperation. Local media Manitoban covered the seminar and filed a report on it.

Other than the seminar, the Falun Gong Students Group at the university also participated in the activities of “Student Groups Week” held on January 21-24 on campus. They set up a booth where they explained to thousands of students about Falun Gong and the human rights abuses happening in China. Hundreds of students and teachers signed a written proposal to the Canadian government. The group also played a documentary film “Between Life and Death” which depicts the forced organ harvesting of living Falun Gong practitioners. Some overseas Chinese students watched the film and decided to renounce the CCP and its affiliated organizations.