Courts ignore unlawfully imprisoned inmate’s appeal
Falun Dafa Information Center -- NEW YORK -- A Falun Gong detainee continues to suffer abuse and arbitrary extension of his 'sentence' even as some Chinese officials raise the possibility of reforming or even abolishing the labor camp system altogether.
Mr. Cao Dong's appeal for his wrongful incarceration at the Beijing Men’s Labor Camp has been ignored for more than three months, despite help from an internationally recognized human rights lawyer, the Falun Dafa Information Center has recently learned.
Cao was abducted from a private residence on June 8, 2012, after more than ten police forcibly entered the home and found “75 Falun Gong books and 14 copies of Falun Gong materials,” according to court papers.
Attorney Mr. Li Xiongbing, known for his landmark defense of a Falun Gong practitioner in 2006, (and described in the book Sword and Shield: China’s Human Rights Lawyers,) argued in his appeal that the arrest was unconstitutional and that, on the basis of the law, Mr. Cao should be released unconditionally. The Beijing Labor Camp Committee rejected the appeal in October 2012. The Xicheng District Intermediate Court, the next higher authority, has ignored it since November 9. 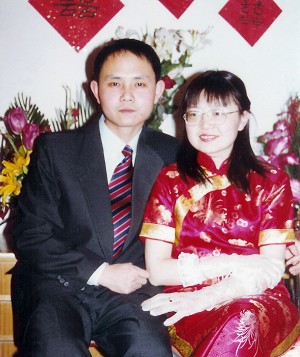 Falun Gong practitioners Cao Dong and wife Yang Xiaojing
pictured here in a 2006 file photo
Living History
Mr. Cao’s personal experiences of abuse chronicles the nearly 14-year policy of persecution against Falun Gong.
He was arrested a total of three times before his most recent arrest and served over ten years in prison, nearly dying from torture several times. The charges that substantiated the arrests were: reading Zhuan Falun, the main text of the Falun Dafa practice, printing materials that exposed police abuses and, finally, “leaking state secrets.”
The last charge came in 2006, just two hours after a face-to-face meeting between Mr. Cao and Mr. Edward McMillan-Scott, a vice president of the European Parliament. The subject of the conversation was Mr. Cao’s wife, also a practitioner, who was then being abused at the Beijing Women’s Labor Camp.
Police had listened to the conversation and sentenced Cao to five and one half years in prison. McMillan-Scott raised the cases of Mr. Cao and his wife, Ms. Yang Xiejing, to the international community, but Mr. Cao remained in prison until 2011, two years after Ms. Yang eventually died from abuses sustained at the Labor Camp.
Talk of Reform
Mr. Cao’s recent appeal comes at a time when the new leadership in Beijing has intimated reform of the controversial Re-education Through Labor (RTL) system. It is unclear, however, how the reform may look or if it will happen at all.  It is also unclear how reform of the RTL system might relate to China’s overall policing apparatus or, in particular, the unlawful persecution of Falun Gong.
“True reform would mean the unconditional release of Cao Dong and hundreds of thousands of Falun Gong practitioners like him,” said Levi Browde, director of the Falun Dafa Information Center. “Not just from the RTL system, but the multitude of prisons, black jails and brainwashing centers as well."
“It would mean that the rights accorded by the Chinese constitution are granted to Falun Gong practitioners. It would also require redressing the countless crimes committed by the communist regime against Falun Gong practitioners and their families,” Browde conluded.
FOR MORE INFORMATION, PLEASE CONTACT THE FALUN DAFA INFORMATION CENTER
Contacts: Gail Rachlin (+1 917-757-9780), Levi Browde (+1 845-418-4870), Erping Zhang (+1 646-533-6147), or Joel Chipkar (+1 416-731-6000)
Fax: 646-792-3916 Email: contact@faluninfo.net, Website: http://www.faluninfo.net/

“My Attachments to Desire and Lust Are Reflected in My Surroundings ”