(Minghui.org) Nasul TV, one of the most respected independent TV channels in Romania, with nationwide coverage, broadcast the film “Free China: The Courage to Believe” on November 28. This screening coincided with an important Central and Eastern Europe (CEE) summit in Romania the same week.

Chinese Premier Li Keqiang attended the summit along with a group of business delegates from China and many top government officials and businessmen from other Eastern Europe countries.

This is the first time the documentary “Free China” has been broadcast on television. The film aired in English with Chinese and Romanian subtitles. A simultaneous live streaming was also available on the television station's website. 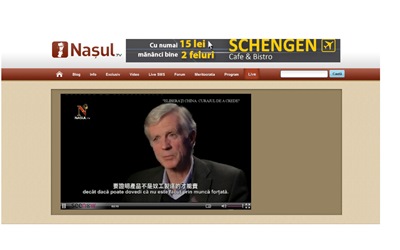 In this screenshot from the Nasul TV online streaming of “Free China,” David Kilgour, former Canadian Secretary of State for Asia-Pacific and Crown Prosecutor, comments about slave labor in China's labor camps.

Directed by Michael Perlman of “Tibet: Beyond Fear,” and co-produced by New Tang Dynasty Television (NTD), the award winning 53-minute documentary tells the remarkable stories of two survivors of China's brutal forced labor system. They are two among the millions of peaceful Falun Gong practitioners in China who have endured unimaginable suffering, including torture, for upholding their spiritual beliefs. Through their stories, the film puts a human face on China's human rights abuses, including arbitrary detention of dissidents, export of slave labor products to the West, and the harvesting of organs from live prisoners of conscience.