(Minghui.org) A shocking scene in front of the student union building on the campus of Cardiff University attracted many people passing by: A person was lying on a bloody sheet on a surgery table with his organs showing. A few doctors and a nurse were speaking to the students and faculty members. Above the operating table was a banner reading “Help Us Stop Forced Organ Harvesting”.

This was a signature petition organized by the Amnesty International Cardiff branch (AI Society Cardiff) on November 28. The AI members re-enacted the organ harvesting from living Falun Gong practitioners in China, exposing it to the public and calling for help to stop it. 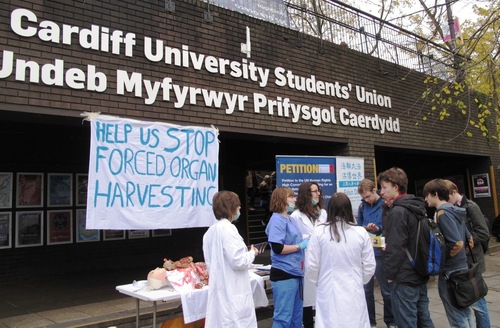 The chair of the AI Society Cardiff, Amber Ruguski, a neuroscience major, initiated the activity. Two weeks ago, “Doctors Against Forced Organ Harvesting” (DAFOH) presented “Unethical Organ Harvesting in China” at the National Assembly for Wales.

Amber and a few members who attended the forum were shocked by the brutal facts. They decided to take immediate action. In two weeks, the AI members designed the flyers and banners for the event, and made the props for re-enacting the organ harvesting.

Echoing the DAFOH (Doctors against Forced Organ Harvesting) petition to the United Nations, the organizers also collected signatures calling for an immediate end of the organ harvesting from Falun Gong practitioners in China. Fully aware of the urgency and significance of the issue, Amber and her friends scanned the signatures and sent them to DAFOH right after the event.

There are many Chinese students at Cardiff University, located in Cardiff, capital of Wales. During the five-hour signature collecting, many of them stopped by to watch the re-enactment. Facing the brutal truth, and watching Welsh young volunteers call for helping the Chinese people, some Chinese students were deeply moved. They talked to the volunteers, and bravely signed the petition. One student quit the Chinese Communist Youth League. 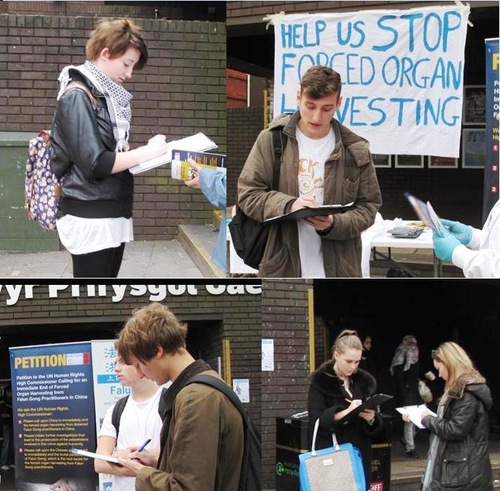 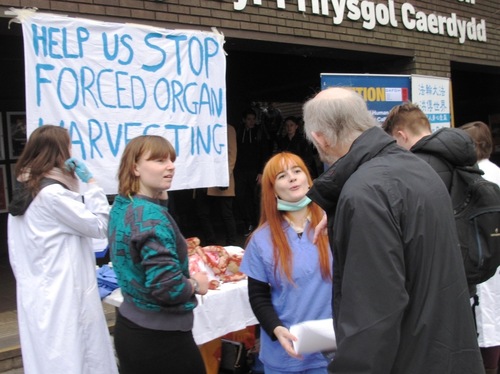 Mr. Lane, a senior, is talking to the volunteers.

Mr. Lane, a senior student studying street protests, watched the re-enactment for a long time, and signed the petition. He had seen Falun Gong practitioners' activities in Cardiff a few years. He praised the AI members for using the vivid props and re-enactment to raise awareness. He also liked the way the volunteers interacted with people passing by, dressed as nurses and doctors. He believes that it is a powerful way to let more people know about the Chinese government's crime of organ harvesting.

Amber designed the flyers for the event, which tells “peaceful Falun Gong practitioners are being killed for their organs;” “Join us in protest!” She also suggested the re-enactment of the organ harvesting. 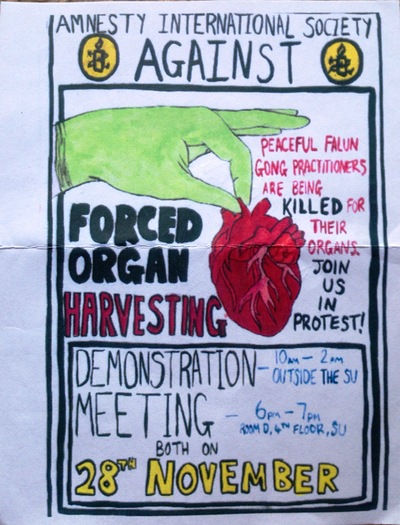 The flyer designed by Amber

Laura, majoring in history and political science, Kez, a pre-medical student, Emily, majoring in music, and Fiona, a pharmacology student, all members of AI Society Cardiff, were dressed as doctors and nurses, and talked to people passing by, encouraging them to sign the petition.

“Nurse” Fiona wants to be a doctor in the future. Her mother, a professional nurse, heard about the organ harvesting from Fiona. Shocked and concerned, she taught Fiona how to make organ models for the re-enactment.

“We want to make the scene shocking, because organ harvesting is a shocking and evil crime. Many people have never heard about it, so we want to touch them. We believe that once people learn about it, they will have very strong feelings. That is the purpose of this event. For some people it's hard to believe that such a crime as organ harvesting is still happening. So we try to tell them that it has been happening in China. People were shocked, and they asked us what they can do to help,” said Fiona. 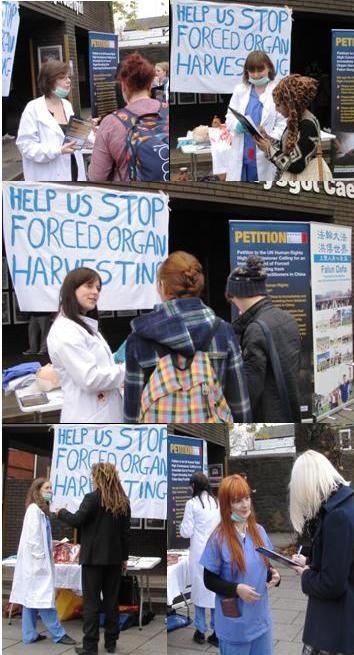 The AI Society Cardiff had their monthly meeting on the night of the signature drive. Two Falun Gong practitioners were invited to demonstrate the exercises, and played an eight-minute long video made by the NTDTV (New Tang Dynasty Television): “Killed for Organs: China's Secret State Transplant Business.” At the end of the meeting, Amber suggested that every attendee should write an appeal letter to their member of the national assembly, calling on the lawmakers to condemn the Chinese government's crime of organ harvesting.

The attendees strongly condemned the persecution of Falun Gong in China. Kez Rose said: “It is ridiculous that people were arrested for meditating. It is really hard for westerners to understand, as it is a basic human right.” She said, “The persecution is as bad as the Nazis' genocide. If nobody takes action to stop it, when will it end? International society should not ignore this crime.”

Amber believes that the persecution is more horrible than the killing that takes place in wars. “It is genocide, and we have no reason to tolerate it,” she said. 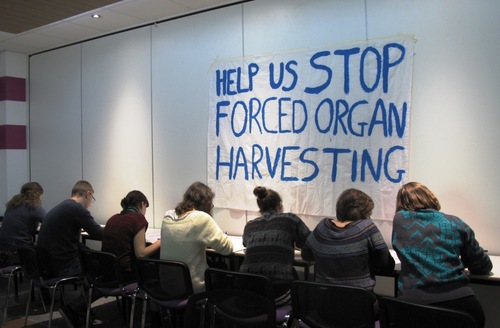 At their monthly meeting, the AI members are writing to their legislators to help stop the organ harvesting in China.

To meet DAFOH's deadline of submitting the petition to the UN Human Rights High Commissioner, which is in two weeks, Amber scanned the signatures immediately after the meeting, and sent them to DAFOH. The appeal letters from the AI Society Cardiff members will be sent out soon.

Cardiff University, founded in 1883, is the second oldest university in Wales. It has three colleges: Arts, Humanities and Social Sciences; Biomedical and Life Sciences; and Physical Sciences and Engineering. It is a member of the Russell Group of leading British research universities.