(Minghui.org) When Chen Deming, president of the China Association for Relations Across the Taiwan Straits, visited Taiwan recently, Falun Gong practitioners held banners nearby to protest the Chinese Communist Party (CCP) persecution of Falun Gong and to demand its immediate end. 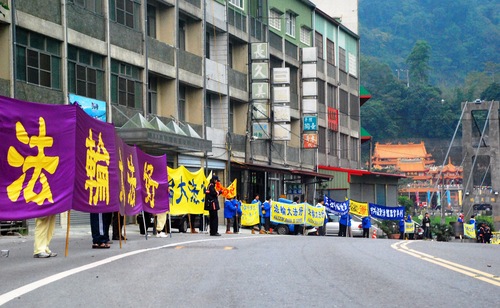 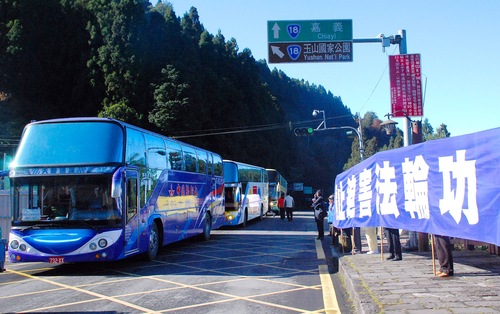 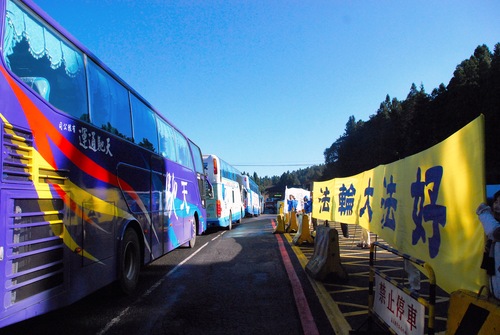 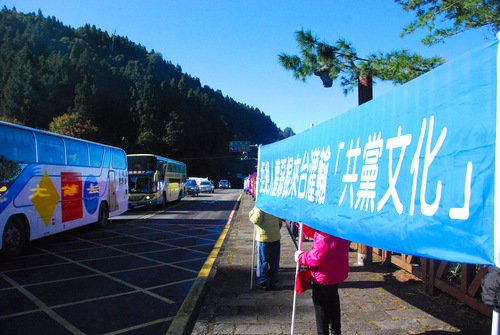 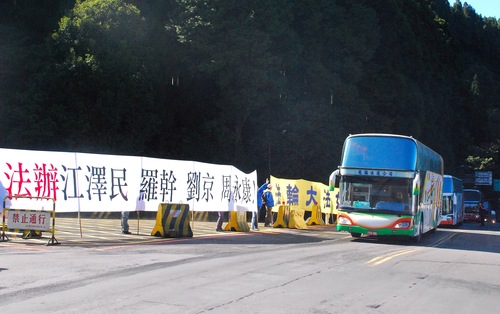 Alishan National Scenic Area was Chen Deming's destination. His motorcade entered the area a little after 5 p.m. on November 28.

Falun Gong practitioners held banners on either side of the entrance and shouted “Falun Dafa is great!” and “Stop the persecution of Falun Gong!”

Practitioners and their banners appeared near the entrance again at 8 a.m. the next day.

Chen Deming Participated in the Persecution of Falun Gong

Appointed president of the China Association for Relations Across the Taiwan Straits in April 2013, Chen Deming was the former secretary of the CCP Committee in Suzhou, governor of Shaanxi Province, and deputy director of the National Development and Reform Committee.

Chen was listed as a target for investigation by the International Organization to Investigate the Persecution of Falun Gong for the deaths of Falun Gong practitioners in Shaanxi Province due to police violence during custody.

Making Sure Chen Gets the Message

Falun Gong practitioners held banners to protest wherever Chen Deming went after he arrived at Tanyuan Airport on November 26. Practitioner Mr. Shi explained, “Falun Gong stands for Truthfulness-Compassion-Forbearance and benefits society. It has been embraced in more than 100 countries. Yet this wonderful practice is being is being persecuted by CCP.”

Mr. Huang from Yunlin County said, “The CCP has persecuted Falun Gong for 14 years and even harvests organs from living Falun Gong practitioners for profit. We are here to demand that the Party stop persecuting Falun Gong.”

Miss Chiu from Chiayi said the main reason she was there was to tell Chen Deming, “Falun Dafa is great. Stop persecuting Falun Gong.”

A practitioner holding a banner said that many mainland China tourists in tour buses gave "thumbs up" when they passed by. He said he was glad that they supported practitioners' righteous efforts and knew the facts about Falun Gong.

“Germany: The People of Regensburg Are Against the Persecution”