Can You Guess What This Miniature Stool Is Used For?

(Minghui.org) The miniature stool in the picture is about one inch tall, one inch wide, and four inches long, smaller than the palm of your hand. It is not the work of an art student for his class, nor is it made of some special material. So what is the function of this mini-stool?

Guards in Liyuan Prison in Tianjin City use it to torture Falun Gong practitioners. 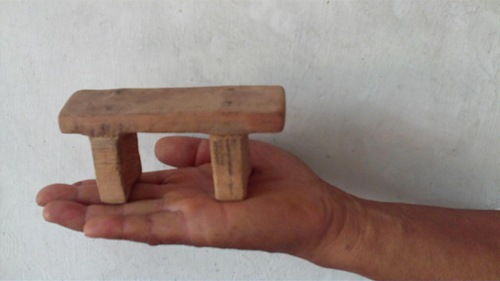 A duplicate of the miniature stool used in Liyuan Prison

This method of torture was used on Mr. Song Zhishan during his imprisonment in Liyuan Prison.

Warden Wang Fengshan instructed guard Li Yuan to make the miniature stool and force Mr. Song to sit on it from 6:30 a.m. until 9:30 p.m. Mr. Song had to keep his back, neck, and head straight and his legs close enough together to hold a piece of paper. If the paper dropped to the floor, the guard would shock him with an electric baton.

After a few days on the miniature stool, the flesh on Mr. Song's buttocks began to fester.

Mr. Song is from Ninghe County in Tianjin. He was arrested and illegally sentenced to three years in prison because he appealed for the right to practice Falun Gong in Tiananmen Square in 2000.

He was initially detained in Liyuan Prison in Tianjin. The guards there tortured practitioners in all kinds of ways to try to force them to renounce their belief.

Mr. Song refused to comply with the guards' demands or wear the prison uniform, so the guards had four big inmates hold him down. One of them had him in a stranglehold, and Mr. Song lost consciousness. Then they forcibly put the uniform on him.

When Mr. Song regained consciousness, he took off the uniform. The head of the prison ordered several inmates to make a sign 30 cm wide and 60 cm long with the words “Undermines the Law” written on it. They ordered Mr. Song to shout out the words at the entrance to the prison factory. Mr. Song refused to, so the guards made him stand facing the wall from 6:30 a.m. to 9:30 p.m. for seven days.

The guards tried all kinds of torture methods to get Mr. Song to stop practicing Falun Gong, but to no avail. They then deprived him of food and water and refused to let him use the restroom for three days.

When that failed, the guards ordered the criminal inmates to beat him. The inmates' terms would be reduced depending on how brutally they beat Mr. Song. Mr. Song was severely beaten.

Afterwards, Mr. Song went on a hunger strike to protest the torture. On the fifth day of the hunger strike, the guards ordered an inmate to force-feed him by putting a rubber tube up his nose. The tube went straight into his lungs, and blood gushed out of his mouth and nose. The guards stopped, fearing that Mr. Song would die.

Mr. Song was transferred to the Gangbei Prison during the latter part of his three-year term.