(Minghui.org) In order to help more people learn the facts about Falun Gong and to further expose the Chinese Communist Party's (CCP) crimes against humanity, Falun Gong practitioners in Turkey organized a Falun Gong photo exhibition on October 18-20, 2013, in the Mediterranean coastal city of Hatay. The theme of the event was "Peaceful Protest." 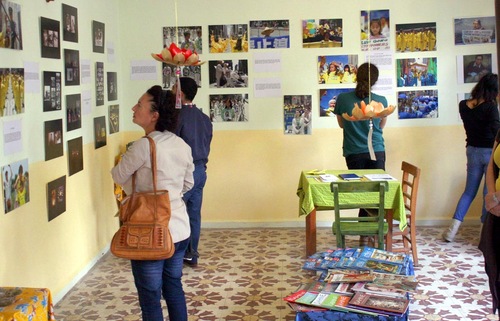 Visitors absorbed in the exhibition 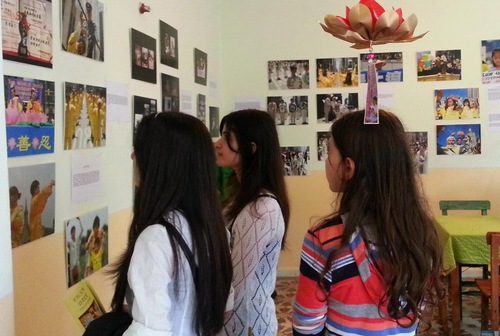 The photo exhibition was held at the Sade Kahve Art Gallery in downtown Hatay. Some of the over 70 color photos showcased the courageous spirit of Falun Gong practitioners in the face of the Chinese regime's brutal persecution, while other photos exposed the Party's crimes against humanity.

The exhibition attracted a steady stream of visitors, with many of them showing support for Falun Gong, as well as their condemnation of the CCP's brutality.

Halil, a jewelry store owner, spent more than 30 minutes carefully studying the photos. He said he was impressed and moved by the practitioners' peaceful and rational approach to the persecution. As he was leaving, he shook hands with a practitioner and said, “Thank you for organizing this photo exhibition in our city and for letting us know the truth about Falun Gong. Please bring the exhibition back, as we will fully support you!”

Mr. Celal, the head of the Hatay City Photography Association, had previously held many personal and human rights photo exhibitions in Turkey. After seeing the exhibition, he expressed his support for Falun Gong. He also volunteered to help the practitioners organize the exhibition photos into a video and slides, so that more people would be able to view them.

Mr. Hasan Torun, an avid photographer, was visiting Hatay from nearby Diyarbakir. He carefully looked at each photo on display, and then strongly condemned the CCP’s brutal persecution of Falun Gong, including its barbaric practice of organ harvesting from living Falun Gong practitioners. He repeatedly requested that practitioners host the exhibition in his city, so as to help the local people know about the Chinese regime's persecution of Falun Gong.

Ms. Semira, a senior agricultural engineer, found it incomprehensible that the Party would use such unrestrained brutality on Falun Gong—a peaceful meditation practice that teaches people how to be good. “The Chinese regime is simply too cruel, too evil” she exclaimed. “Righteous people around the world should stand up to the CCP's crimes against humanity.”