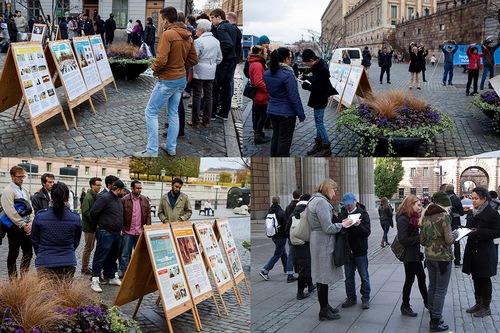 The practitioners' informational display boards and banners caught the attention of many passersby.

People asked: “How can live organ harvesting be allowed to exist?” “What is Falun Gong?” and “Why does the Party persecute Falun Gong?”

Rina, a dental assistant, and her husband were shocked to find out that the communist regime is harvesting organs from living Falun Gong practitioners. They wanted to understand how a crime of this magnitude is being largely ignored by the international community.

The couple listened to a practitioner clarify the facts, then said, “You are doing the right thing! We have to sign to this petition form to show our support for Falun Gong!” Before they left, they thanked the practitioners and wished them success in their efforts.

After a family of Swedes read the practitioners' display boards and understood the truth, the whole family signed their names on the petition form, including the grandmother, who was wheelchair bound. With a shaky hand, she slowly signed her name while exclaiming, “This persecution of Falun Gong is an outrage! It's simply too brutal!”

Many people signed the petition then chatted with the practitioners about Falun Gong, the practice, and the persecution. Some people expressed an interest in learning the Dafa exercises, while others asked asked for the address of the local exercise sites. 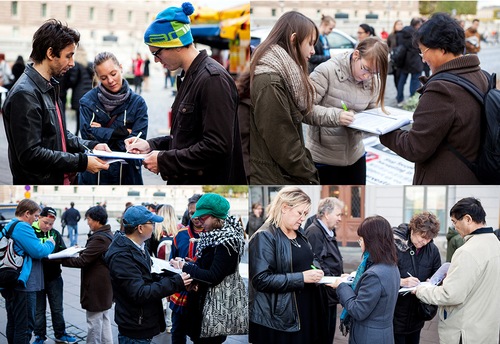 People add their names to the petition to show their support for Falun Gong. 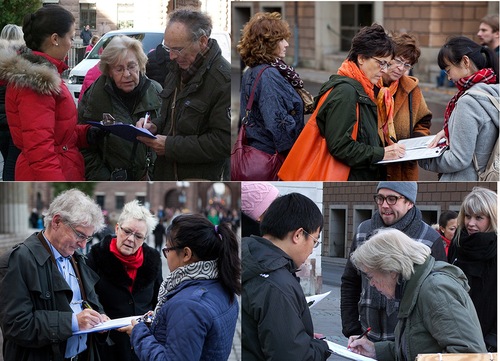 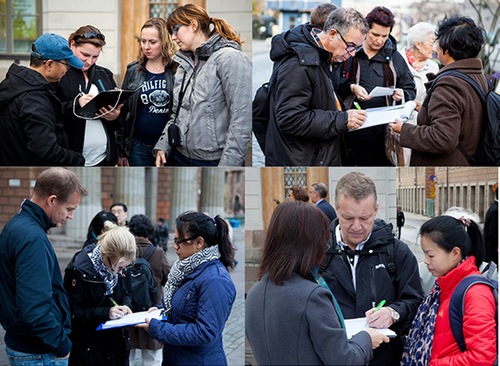 A man from New York read the display boards, then condemned the CCP, saying, “The international community continues to turn a blind eye to the Party’s crimes, all in the name of 'economic gain. I am well aware of the many unforgivable acts of violence and murder perpetrated by the regime.” He said that he was very happy to sign his name on the petition form.

A Swedish engineer approached the practitioners' information table and immediately signed the petition. She said that she knew that the Chinese Party was actively engaged in the illegal trafficking of human organs and was appalled by its total disregard for human life. She then turned to her four friends and told them about the persecution in China and said that they, too, should sign the petition. They all agreed to sign.

Most of the Chinese who passed by accepted the practitioners' informational materials. A young Chinese woman told a practitioner that she belonged to the Chinese Communist Party but hated the fact that it was riddled with corruption. She admitted that she did not know much about Falun Gong.

A practitioner shared with her how Falun Gong had benefited him, how it teaches people to be good, the wonderful healing effects of the practice, and the physical and mental changes that people go through after practicing Falun Gong. She listened very carefully and then gladly quit the CCP.

“What Can Be Learned from the Legend of Nuwa and Buzhou Mountain?”