(Minghui.org) Today's news from China includes incidents of persecution that took place in 5 cities or counties in 3 provinces. According to this report, 2 practitioners were subjected to mistreatment during their detention, and at least 4 practitioners were illegally arrested. 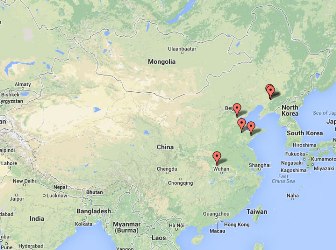 Ms. Hu Xiuyan from Dadong District was arrested on August 30, 2013. She was sent to the Shenyang City Detention Center. On October 10, her 85-year-old mother went to the detention center to plead for her release. The person in charge arrogantly dismissed her request.

Mr. Li Dongman was arrested by officers from the Youyi Street Police Station on October 12, 2013. He is being held in the Hexi Detention Center. Police ransacked his house and confiscated his computer, Falun Gong books and other belongings on the night of the arrest.

Ms. Han Shuting, 81, was arrested on October 11, 2013. She has been transferred to the Zhangdian District Domestic Security Division.

Mr. Zhou Yuling from Nongfeng Village, in his 50s, was arrested at home by officers from the Dongguan Police Station on the morning of October 11, 2013. Police confiscated his computer, a copy of Zhuan Falun, a portrait of the founder of Falun Gong, and other belongings. Mr Zhou is being held in the Gaomi City Detention Center.

Ms. Du Qun was arrested at a market by four plainclothes police officers on the morning of October 10, 2013. She was taken to a brainwashing center in Wuhan.

Ms. Zhu Lanying, 61, was arrested by officers from the Hunhewan Police Station on the afternoon of October 14, 2013. Police ransacked her place at the time of the arrest. When her family went to the police station to demand her release the next day, they were ordered to sign some documents and told that Ms. Zhu had been sent to the Shenyang City Detention Center.

“My Parents Changed from Criticizing Falun Dafa to Being Grateful ”

“I Wouldn't Be Alive Today If It Weren't for Falun Dafa ”