(Minghui.org) The 2013 Malaysia Falun Dafa Experience Sharing Conference was held at the Vistana Hotel in Penang on November 3, 2013. The experience sharing conference provided a great opportunity for Falun Dafa (Falun Gong) practitioners in the area to learn from each other and improve together. Twenty practitioners shared their experience at the conference. 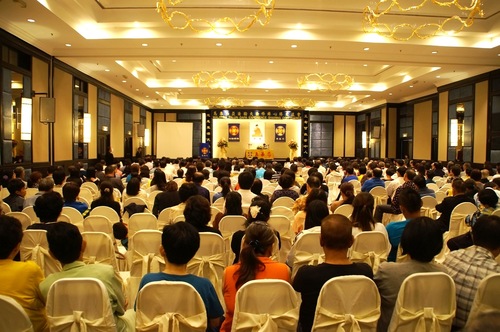 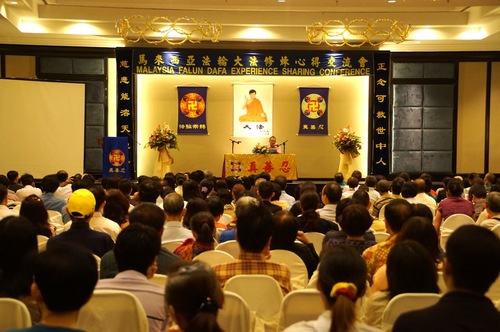 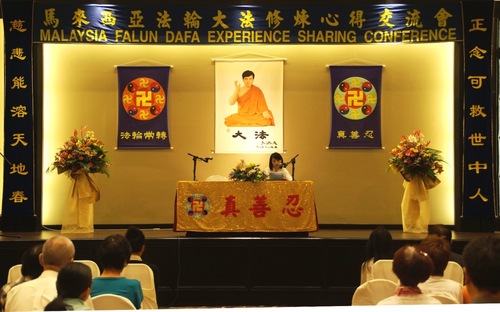 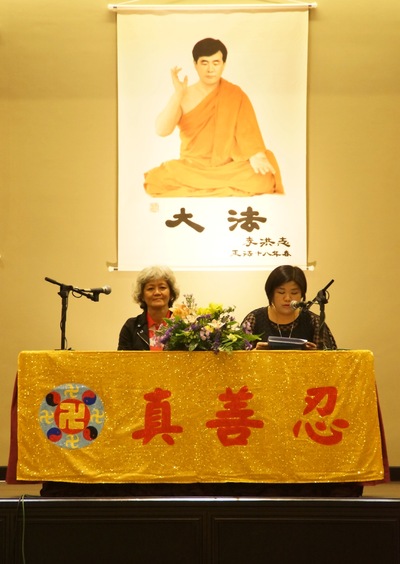 Ms. Yang Jinlian from Kuala Lumpur shared her experience of clarifying the facts about Falun Dafa and sending forth righteous thoughts in front of the Chinese Consulate. Many people were able to learn the true story of Falun Dafa through the efforts of practitioners like her.

However, interference also occurred once in while. One day, a policeman tried to drive Ms. Yang away from the area. He confiscated her ID and insisted that she take down her informational banner.

Ms. Yang told the officer, “The Chinese Communist Party (CCP) threw many innocent Falun Dafa practitioners into forced labor camps and harvested their organs. How can I ignore it? Wouldn't you want to look for your family and friends if they went missing? The Chinese Consulate is the only consulate that has such protests in front of it.” The policeman then left her alone.

Ms. Yang is determined to continue exposing the persecution in China and offering people the opportunity to come to know Falun Dafa. She previously participated in activities to clarify the facts about the persecution in Hong Kong. At that time, members of the Hong Kong Youth Care Association (HKYCA), an arm of the Chinese communist regime, blocked the practitioners' Falun Gong banners. A member of the HKYCA maliciously bumped into Ms. Young and threw her display board away.

While experiencing this tribulation, Ms. Yang thought about how practitioners in China have to face even worse circumstances amid the persecution. She said, “Master has given me a good cultivation climate. I shouldn't forget my responsibility and my mission. I will do my best to offer salvation to more sentient beings.”

Ms. Xia, who is originally from China, has been making phone calls to Chinese government offices to talk to them about the persecution. She said that it is a good way to expose and eliminate the evil, reduce the pressure that Falun Dafa practitioners face in China, and deliver the facts about Falun Dafa to the Chinese courts, judicial bureaus and public security organs.

When she was living in China, Ms. Xia saw how some police officers sympathized with Dafa practitioners but dared not show it. One police officer carefully read an informational brochure about Falun Dafa when his colleagues were away, but quickly hid it when someone approached him.

Doctors Against Forced Organ Harvesting (DAFOH）launched a global signature collection drive to call on the Chinese regime to immediately cease harvesting organs from living Falun Dafa practitioners. Some practitioners at the conference shared their experience of collecting signatures.

Mr. Zhuang Chenli from Klang said she received a lot of encouragement from the public while collecting signatures. Once, an Indian doctor patted her on the shoulder and told her to keep up the good work. A deaf-mute lady wrote on a piece of paper, “Don't give up!”

A Chinese gentleman told her that one of his friends was completing the paperwork to get a kidney transplant in China. He took a copy of the informational materials for his friend, so that he could learn the facts and opt not to proceed with the transplant at the expense of another living being.

Mr. Chen Jinfa is a new practitioner from Petaling Jaya. He first learned about Falun Dafa from a free movie on the YouTube website during a recent New Year holiday. He was deeply moved and started reading about Falun Dafa online. He read many practitioners' experience-sharing articles and became determined to learn the practice.

At that time, he was taking five kinds of medicine because he had suffered a stroke twice. Three weeks after he obtained the Fa, his view of life completely changed. He followed Dafa's principles of Truthfulness, Compassion and Forbearance, and soon his heart disease and chronic headaches were gone. He has been very healthy ever since.

“I couldn't stand any bit of loss before. After learning the principle of 'no loss, no gain' from Zhuan Falun, I stopped worrying about my loss. My business still went very well,” said Mr. Chen.

Ms. Lu Xiuyun from Penang heard about Falun Dafa a year ago through an advertisement for a Shen Yun performance in the Epoch Times newspaper. She read Zhuan Falun online within a few days and got answers to many questions about life, nature and other things that had puzzled her before. She then made up her mind to start cultivating.

Ms. Lu used to be a heavy smoker and had a poor relationship with her family. With Falun Dafa's teachings and fellow practitioners' help, she easily quit smoking. Once she started following the principles of Truthfulness, Compassion and Forbearance, and looking inward for her own shortcomings when facing conflicts, her family life also became harmonious.

Sixty-two-year-old Mr. Xu used to have serious asthma. He had tried all kinds of Western and Eastern medicine, but his asthma only got worse. About a year ago, he saw a group of practitioners doing the Falun Gong exercises and decided to join them. Within eight months of starting up cultivation in Dafa, his stubborn asthma, which had tortured him for a dozen of years, disappeared.

Mr. Xu was very grateful and began participating in activities to spread the beauty of Falun Dafa. He said, “I recently participated in the Divine Land Marching Band parade in Hong Kong. It was a stormy day. I held a banner and walked for five to six miles in strong wind and rain. I was fine. If I hadn't practiced Falun Dafa, I would have passed out.”

“A Miraculous Save in a Timber Processing Facility”