(Minghui.org) Today's news from China includes incidents of persecution that took place in 10 cities or counties in 8 provinces. According to this report, 6 Falun Gong practitioners were subjected to mistreatment during their detention, and at least 10 practitioners were illegally arrested. 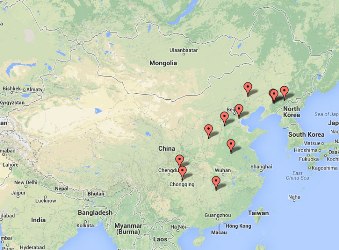 Ms. Meng Guilan from Hongshan District was arrested by police from Kelaqinqi while she was on her way to Tuchengzi, Kelaqinqi, on the night of August 22, 2013. The driver, who is not a practitioner, was also arrested. Ms. Meng is being detained at the Jinshan Detention Center in Kelaqinqi.

Mr. Ma Yongxian, in his 40s, was arrested at noon on September 23, 2013. He was working in his shop at the time of the arrest. His home was also ransacked.

Ms. Tang Meihua, in her 40s, from Xiang Township, was arrested by local police on September 18, 2013. Her whereabouts are unknown.

Recently sentenced to prison, Ms. Zhang Huishuang was transferred from the Benxi City Detention Center to the Dabei Prison.

Mr. Wu Baohui from Qianzhangsima Village, Wangbuzhuang Town, Baodi District, was arrested at home by officers from the local police department and the township police station on the morning of September 23, 2013. Police confiscated many of his personal belongings. Mr. Wu was locked up in the Wangbuzhuang Town Police Station.

The following practitioners were arrested on the night of September 22, 2013: Ms. Li Dongmei and her husband, who is not a practitioner, Mr. Fu Mingyi, Mr. Bai Jie, and others. Ms. Wang Junzhi was arrested the next morning on September 23, 2013.

Ms. Zhang Yuyang was arrested while speaking to people about Falun Gong and the persecution on September 22, 2013. She is being held in a detention center.

Ms. Liu Wanrong, 59, from Yubei District, and another practitioner (name unknown) were arrested by officers from the Beibei District Police Station on the morning of September 18, 2013. The officers confiscated Ms. Liu's house keys during the arrest and then broke into her home. They confiscated over 30 Falun Gong books and informational DVDs, two MP3 players, and over 100 currency bills with facts about Falun Gong written on them.

Ms. Liu was interrogated at the police station and then taken to a hospital for a physical checkup. Because she had high blood pressure, the local detention center refused to admit her. She was then released.

Mr. Meng Liqiang from Linfen City was arrested by Zhang Wei and other officers from the Longxing Police Station of the Xinjiang County Police Department on the night of August 29, 2013. He is being held at the Xinjiang Detention Center.

Ms. Du Lanmei and Ms. Liu Suling from Yuan Village, Qiaodong District, were arrested on the night of September 19, 2013. They have been detained at the Nanhuochang Detention Center in Shijiazhuang City. The arrest was made by Li Jingshun, an instructor of the Penghou Street Police Station in Qiaodong District.

Mr. Qin Huaibin was arrested in 2008. He was sentenced to 9 years of imprisonment and sent to the Shiling Prison in Siping. He was brutally tortured in the prison and has visible scars from the mistreatment.

When his family came to the prison to visit him, the guards monitored them through surveillance. As a result, Mr. Qin could not tell his family what happened to him.

Mr. Qin has become very emaciated and has lost his appetite and the will to eat. He has a sore throat and a lump in his stomach as a result of the abuse.

“Overcoming the Attachment of Fear and Exposing the Persecution ”