(Minghui.org) The Chinese Communist Party has used a variety of despicable means to persecute Falun Gong practitioners, including brainwashing, torture and poisoning with toxic drugs.

Ms. Wang Guolian was fed poison and injected with drugs. The following is her story:

During my detention, I witnessed that Falun Gong practitioners who went on a hunger strike were force-fed with poison. Here, I will report my own unforgettable experiences. 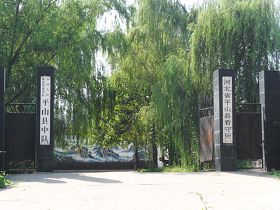 This was not the kind of food that was provided to us every day, except on New Year's Day. One day, I was brought into a room and told to sit down. A bowl of noodles was put in front of me. About a dozen guards wanted me to eat the noodles, They kept saying, “Hurry up, hurry up, you must eat it today, you must!”

I felt pressured and hesitated as to whether I should eat it or not. Suddenly, the bowl jumped to the edge of the table and then stopped. It felt weird, and I immediately realized that the noodles may be poisonous, and that Master had given me a hint. Thus, I decided not to eat them. The guards tried to persuade me, and even threatened me, but I did not give in. This lasted about half an hour.

At last, they appeared to give up, but came up with another trick.

They forced me into a car and drove me to the Pingshan Hospital. I was taken to a surgical ward on the fifth floor. They tried to inject me with drugs using my hunger strike as an excuse. A kindhearted person notified my family members, and several of them came to the hospital.

Li Guoping, director of the detention center at that time, Wen Fengshan, a doctor in the detention center, He Shouqing and another person pushed me down on a bed. Both of my hands were cuffed to each side of the bed; my feet were shackled to the other end of the bed, so I could not move at all. 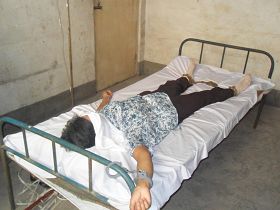 Re-enactment of the mistreatment in the hospital.

Sun Pingshu, the chief nurse and others then started to inject me with drugs. I had been on a hunger strike for nearly 10 days, so they should have used a big bottle to give me intravenous fluid. However, the bottle was very small and was only half full. I then doubted their intentions and begged Master to help me resist any drugs from these people.

A few minutes later, I started shaking all over and cried, “Remove the needle immediately.” Soon, I could not speak at all.

Wen Fengshan said viciously, “You are just pretending.” My family members realized that I was on the verge of dying and demanded that they remove the needle.

Due to their persistent demand, the guards then told the nurse to remove the needle. They then took me back to the detention center.

I did not know what kind of drugs they had tried to inject me with, but Sun Pingshu and other nurses should have known. According to professionals, nurses must be aware of the kind of drugs they are administering to their patients.

Although, they did not fully succeed in poisoning me, they had injected me with some unknown drug. As a result, I later experienced some abnormal conditions, including dizziness, nausea, being unable to eat, and rapid weight loss from 190 lbs to 100 lbs.

Most weirdly, I started to drool during sleep every night. I did not know what was happening in the beginning. I put towels under my face, and they got wet every night. Later, I used the cover of a hot water bottle to collect the saliva. This abnormal phenomenon lasted about 60 days.

Had my family not been present that day, and they continued to inject me with the poison, I don't know what would have happened to me.

For the Falun Gong practitioners who went on a hunger strike at that time, those who did not eat this so-called “special meal” remained sane, but those who ate this food became more susceptible to brainwashing.

The Chinese Communist Party is extremely malicious. It controls the police, as well as immoral medical personnel who forcibly inject unknown drugs into healthy Falun Gong practitioners or put drugs in their meals.

The number of Falun Gong practitioners who have been disabled or killed with poisonous drugs over the past 14 years is likely to be very large.

Those responsible for the persecution will have to pay for their actions. It is a heavenly law that evil people will be punished for their bad deeds!

“Western Practitioner: Improving My Understanding and Breaking Through the Attachment of Lust”