(Minghui.org) Falun Dafa Practitioners from Rhode Island recently participated in two community events to introduce Falun Dafa to people, clarify the truth, and collect signatures for the petition from Doctors Against Forced Organ Harvesting (DAFOH) to be submitted to the United Nations Human Rights Commission, “Calling for an Immediate End of Forced Organ Harvesting From Falun Gong Practitioners in China.” The weather was beautiful both days, and practitioners had the opportunity to clarify the truth to a diverse array of people. Practitioners showed children and families how to make folded paper lotus flowers, and several people were interested in learning the Falun Dafa exercises. Dozens of signatures were collected for the UN petition after practitioners clarified the facts about what was happening in China.

The first event, in Pawtucket, RI, was the Pawtucket Dragon Boat Festival and Taiwan Day Festival on Saturday, September 7, 2013, co-hosted by the Blackstone Valley Tourism Council and the Taipei Economic and Cultural Office. Dragon Boat racers from around the New England area come to participate in this event annually. 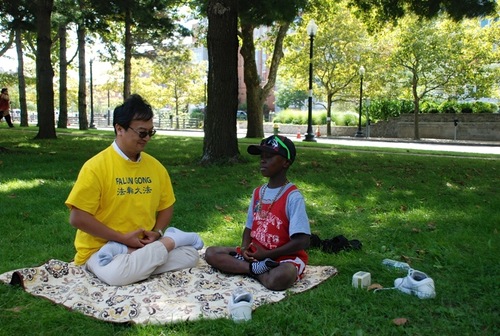 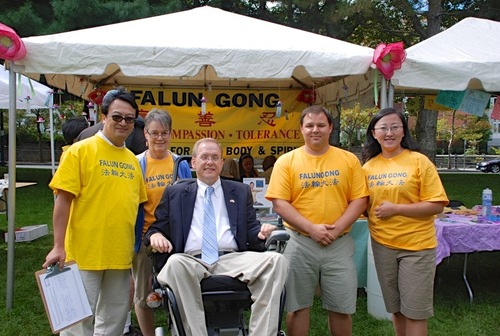 Practitioners pictured with Congressman Langevin, a co-sponsor of H.Res. 281.

On Saturday, September 21, 2013, Falun Dafa Practitioners from Rhode Island participated in a Walk for Peace Day in Providence’s India Point Park. The event was hosted by The Peace Flag Project and was in honor of the United Nations International Day of Peace. At the event, Falun Dafa practitioners demonstrated the Falun Gong exercises, clarified the truth, and collected signatures for the petition from Doctors Against Forced Organ Harvesting (DAFOH), “Calling for an Immediate End of Forced Organ Harvesting From Falun Gong Practitioners in China.”

The event included a silent walk along the edge of India Point Park, followed by speeches promoting peace and well being. The Mayor of Providence, Angel Taveras, attended the event and supported the strength of what the event represented to communities in Providence and throughout Rhode Island. The director of the Center for Nonviolence & Peace Studies at the University of Rhode Island, Paul Bueno de Mesquita, PhD, also spoke at the event, encouraging attendees to think globally about the value and power of peace and non-violent protest, citing the work of Martin Luther King Jr. and others. Practitioners clarified the truth to the Mayor of Providence and Dr. Mesquita at the event. 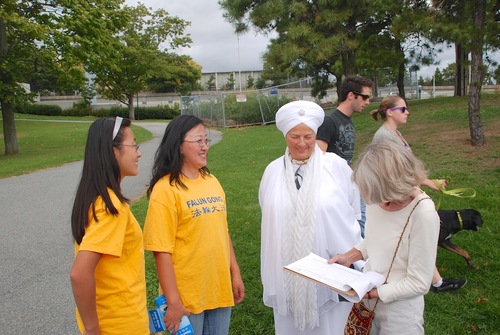 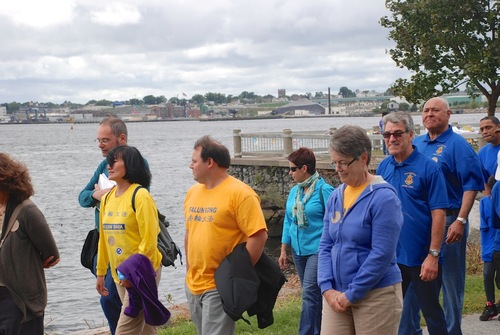 “Los Angeles: “I am Proud of Being a Chinese, Because of Falun Gong.” (Photos)”