Los Angeles: “I am Proud of Being a Chinese, Because of Falun Gong.” (Photos)

(Minghui.org) “I didn't want to tell people that I am a Chinese, because I felt somewhat shamed. Since I watched the Shen Yun show and learned about Falun Gong, I've become proud of being a Chinese, because these best things came from China. They make me feel that I am so close to the divine,” Ms. Lan said when watching a Falun Gong march at Chinatown, Los Angeles on October 20.

More than one thousand Falun Gong practitioners from all over the world held a grand march in Chinatown. The march was led by the Divine Land Marching Band, taking off from Broadway and ending at the Chinese consulate. 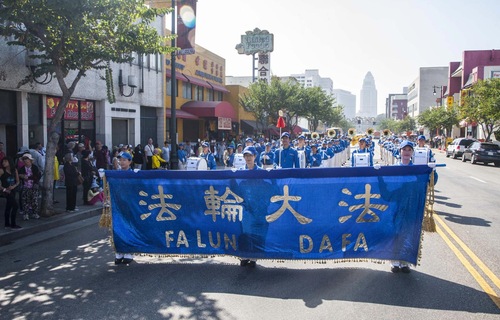 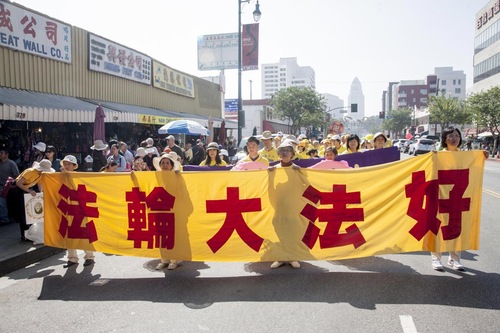 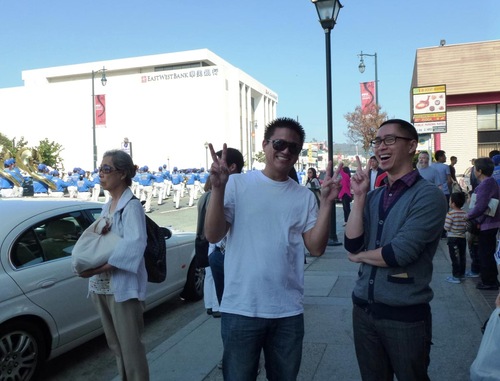 Before the march, Ms. Lan Yuechan, a Chinese lady, watched the rehearsal of the Divine Land Marching Band. She said to the reporter: “My father is a Chinese businessman. To avoid the Chinese Communist Party's persecution he escaped to Vietnam years ago. We all know how evil the communist party is. We all hate it, and we don't want to tell people that we are Chinese. But Falun Gong and the Shen Yun show changed me. They make me feel that I am close to the divine.” 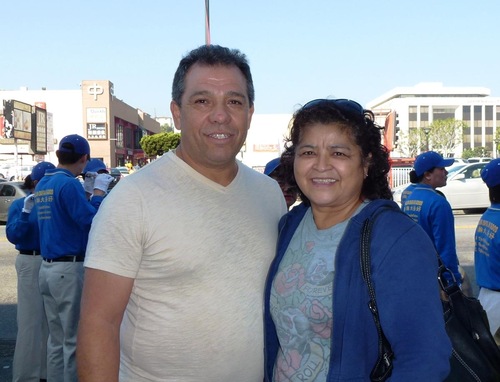 Mr. Etrao and his wife from Mexico

Mr. Etrao and his wife from Mexico watched the march for a long time. He had never heard of Falun Gong, but he believes that everybody needs “Truthfulness-Compassion-Forbearance.” He was shocked by the organ harvesting in China. He and his wife strongly support the practitioners' peaceful resistance.

Those who were in the march came from all over the world. They wanted to share the beauty of Falun Gong with the public and raise the awareness of the persecution. 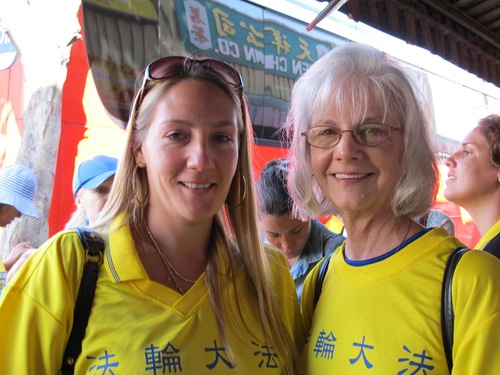 Kerrie and her mother Joyce Mitchell

Joyce from Kansas started practicing 11 years ago. A muscular fibroid tumor, which had tortured her for a long time, was gone soon after she started. Three years later, her daughter Kerrie also joined the practice. Joyce hopes that the whole world would learn about Falun Gong and benefit from it. 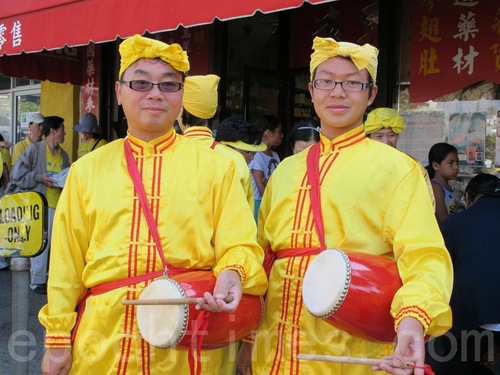 Han Phan and his son from Canada performed on the waist drum in the march.

Han Phan, a Canadian Vietnamese, started practicing Falun Gong 12 years ago. As a restaurant owner, he made a lot of money, but he felt an emptiness in his life. He practiced Zen meditation for three years, but was not fulfilled until he saw a Falun Gong flyer in his restaurant. He found the book Zhuan Falun, and finished it in two days. “My life was renewed,” he said. 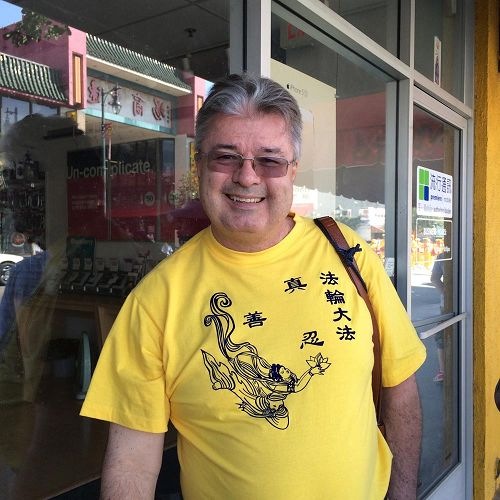 For Harold Werner from San Diego, healing and fitness were not the motivation to practice Falun Gong. He was looking for inner peace. He believes that the principle of “Truthfulness-Compassion-Forbearance” can benefit the world, and all the conflicts between people can be resolved by looking inward—a main teaching of Falun Gong. If everybody can look at problems from others' perspective, then no fighting would exist.