The exhibition is an extraordinarily moving, intimate and inspiring exhibition detailing both an inner spiritual life and an outer human rights tragedy. 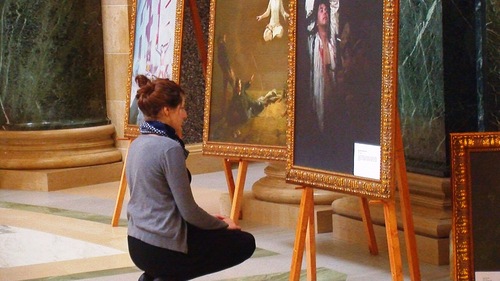 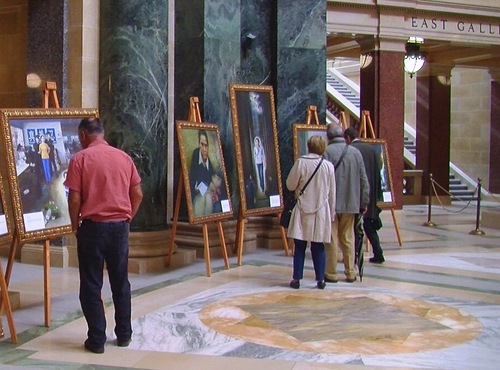 Visitors are deeply absorbed in the paintings. 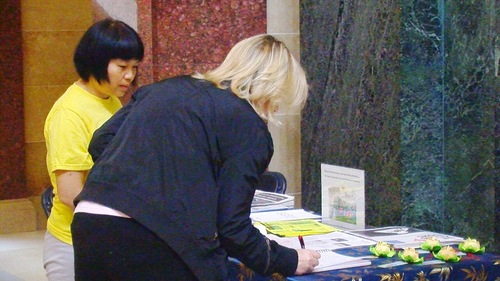 An attendee writes her comments in the guest book.

Four girls who attended the exhibition together, said that they were shocked to find out that kindhearted people who follow the principles of Truthfulness-Compassion-Forbearance are being persecuted in China.

A tourist from Mexico could not hold back his tears when he told a practitioner, “I can understand the deeper meaning of the paintings and that Falun Gong practitioners in China are being persecuted because of their belief.”

He said that he appreciated all of the time and effort that the practitioners had put into arranging the exhibition.

After viewing the paintings, a student club leader from the University of Wisconsin asked a practitioner about the Chinese Communist Party's persecution of Falun Gong and its crime of harvesting organs from living practitioners.

“In July 1999, the Chinese regime initiated the brutal persecution of Falun Gong,” explained a practitioner. “The persecution, including live organ harvesting, is still taking place in China. The paintings are based on true life stories.”

After listening carefully and taking notes, the student asked the practitioner if he would mind sharing the practice of Falun Gong with her club.

Over the course of eight days, several hundred people viewed the paintings. Many attendees wrote uplifting comments in the exhibition guest book and praised the practitioners for their efforts in bringing the paintings to their city.

“More and More People Are Awakening: A New Trend in the Countryside”