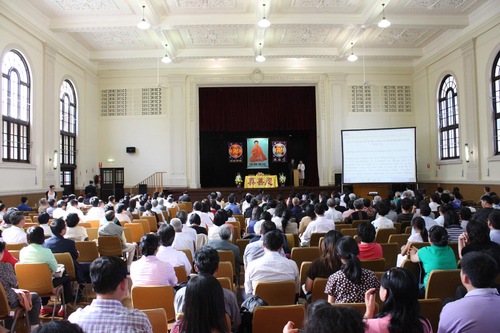 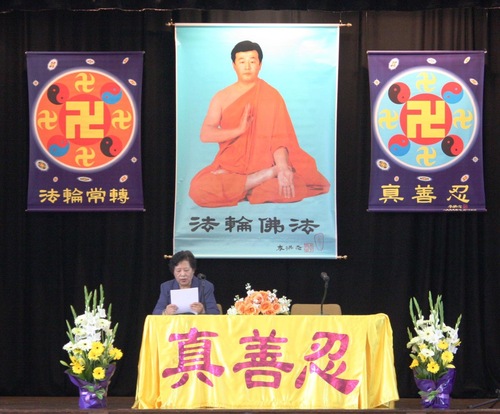 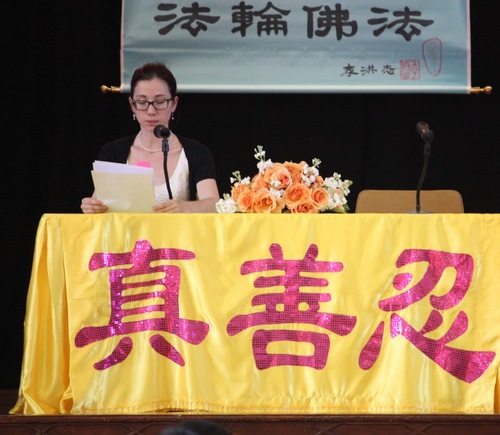 Practitioners sharing their cultivation experiences at the conference

A senior practitioner, who started practicing 17 years ago, said in her sharing that when she first obtained the Fa, she had the pursuit of knowledge, and therefore she could not study the Fa well. Later she changed her mindset. She asked herself to read the Fa with respect to Master and a humble heart. She shared, “I realized that I need to read every word carefully, and not miss a single word, because Master's Fashen is behind every word in the Fa. Misreading any word is disrespectful.” She also asked herself to dress formally when going to the group Fa study, and to never be late to the group study. After she changed her attitude to reading the Fa, she felt that she could calm down even when she reads by herself, and the Fa can really enter her mind. Her sharing made many fellow practitioners cry. After the conference, some practitioners said that they would also read the Fa with more respect.

A project coordinator shared how she treats criticism. She recalled, “Sometimes after I'd done so much for fellow practitioners, they didn't thank me, but complained about me. I asked myself: do I really put down my self when I help others? When I recommended my way of doing things to other practitioners, did I really consider their feelings? Did I consider whether they can really benefit from my recommendation? Did I consider what they really need? Sometimes, a good deed looks good on the surface, but if I do it based on the foundation of selfishness, then the good deed can become bad. I realized that during cultivation one should not only look at things at the surface level. What is really important is whether one can truly improve or not.” She said, “I realized that I had selfishness when I was trying to help others. I had pursuit. I pursued appreciation and praise.”

Mr. Xu obtained the Fa in June 2012. He is a successful businessman. He was tortured by all kinds of diseases. After he watched the video of Master Li Hongzhi's lectures in Guangzhou, his insomnia immediately disappeared. In the sharing, Mr. Xu said that his mind and body changed dramatically over the past year. “Every improvement I made was under Master's protection and help. At every step of cultivation, I deeply sense Master's benevolence, and his guidance and protection,” he said.

After the conference, practitioners shared their feelings. Ms. Chen said, “The quality of the prepared speeches at this conference was better. Before, many practitioners liked to talk about their achievements, and I could sense their excitement in the speech. But this time, it is different. Instead of the excitement, I sensed the peacefulness and humbleness in their speeches. Also, the speakers did not talk about who did right and who did wrong. Instead, everybody looked inward, especially the coordinators. I see the improvement of practitioners as a whole.”

Mr. Deng said, “I was deeply touched by two older practitioners' sharings. They didn't know how to operate a computer, and it was hard for them to learn since they are old. But, in order to use the Internet to clarify the truth to people in China, they overcame all kinds of difficulties, and learned how to use a computer. Today, one of them typed his own speech on the computer, and taught the other one how to do it as well. It is really amazing. I can feel their strong spirit and the heart of saving sentient beings.”

“Learning to Coordinate on the RTC Project”