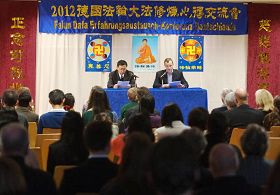 A dozen practitioners who are involved with making phone calls from Germany to China wrote a joint article to share about how they improved their xinxing to save sentient beings in the process of making truth-clarification phone calls. The first hurdle to get over for almost every caller was to overcome the attachment of fear: fear of being made fun of, fear of lack of words to convince the other party, fear of being scolded, etc. But through relying on righteous thoughts to save sentient beings, practitioners overcame their fear. They also realized that not having the courage to make phone calls was because the negative evil factors were hindering them. When practitioners broke through these attachments, they immediately reached higher levels, thus fear could no longer interfere with them. Later, practitioners were not afraid of making phone calls.

In the process of making calls, jealousy, competitiveness and the attachment to fame, surfaced one after another. Especially when calling the police, competitiveness and hatred could easily surface. As these attachments were gradually let go of, the effects of their calls got better and better. Some police denounced the Chinese Communist Party and its affiliated organizations over the phone.

Forming one body while clarifying the truth to politicians

Five practitioners from Hamburg talked about the process of strengthening truth clarification to politicians over the past six months, and how they let go of prejudice, notions, and selfishness to form one body. In the course of dealing with politicians, they learned to think of others first, to consider what the other person needed, what the other person wanted to do, rather than just what they wanted to tell others.

One practitioner mentioned that she once held a notion against politicians, thinking that they were self-centered, chasing after fame and fortune, and were not interested in improving the living conditions of the people. She felt as a practitioner she was better than them so she despised politicians. She was not successful in her first few attempts to clarify the truth to politicians. This made her realize that she lacked tolerance for politicians, which had become a major obstacle for her in saving beings.

Later, the practitioner realized that during the report all three of them played his role fully. Where one did not do well, the others supplemented. No one was better or worse than another because without each other they would not be as successful. So there was no reason to be jealous.

Several practitioners who came to Germany from mainland China talked about how they detected and got rid of the Chinese Communist Party culture from within themselves. An elderly Chinese practitioner recounted that as a teenager he watched many mainland Chinese movies that depicted fights with the "U.S. Imperialists," hatred against the Japanese, and how to fight with these enemies using the most cunning and evil means. At the time, he felt that those movies were great and he watched them over and over again. After coming to Germany, he stilled his mind to study the Fa and read the Nine Commentaries on the Communist Party. He realized that he'd grown up in the pollution of the big vat of the evil Party, and the attachment to competitiveness had soaked through his blood and bones. For example, when he saw the coordinator's performance, he thought, “That coordinator’s level is really low, he is not even as good as me." Afterwards he realized that that feeling was the attachment to competitiveness and jealousy from the party culture.

A female practitioner with two children was once a manager in a large corporation. Because of party culture, after becoming a full-time housewife she always felt trapped at home by her children and housework. She felt that her abilities were not being made use of to the fullest. She felt tired and bitter. But during the promotion of NTDTV’s nine competitions, through the practice of traditional Chinese culture, she realized that in ancient times housewives had the duty to “serve their husband and teach children” at home. Many celebrities, kings and ministers made names for themselves through the ages and left humanity with authentic culture because they had a good mother or wife at home.Party culture, however, devalued women's traditional virtues and advocated women to fight with men, which was the reason why she could not go with the flow, and was unhappy with the role of being a wife and mother. She realized that this environment was for her to let go of impatience. She had to cultivate to being busy but not chaotic, looking inward unconditionally, and to be compassionate and tolerant. The thought that, "I should do what I want to do according to my abilities,” was wrong. Also, it was a kind of competitiveness to unconsciously become confrontational when people and the environment were not ideal.

Letting go of self to clarify the truth to the mentor

A Chinese PhD student talked about how he clarified the truth to his doctoral mentor. The practitioner’s mentor had always admired his work, but on one occasion he unexpectedly became very dissatisfied with the practitioner because of a trivial matter, and even said he would no longer offer him any help. Although this was a misunderstanding, and it was not the practitioner’s fault, he realized that nothing was a coincidence. He thought about whether he had any loopholes. For three years, he had clarified the truth about Falun Gong to colleagues and to the vice mentor, but not to the mentor. The reason was that the practitioner was afraid that if he told the mentor the truth, the mentor would mistakenly believe that he had not been doing scientific research well, but rather focusing on other business. He enlightened that it was selfish self-protection to preserve his personal interests and ignore the other’s millions of years of waiting.

Later he wrote a long e-mail to the mentor, introducing the persecution of Falun Gong in detail, and also talked to him face to face. The mentor showed his understanding and supported him in his anti-persecution work. The practitioner enlightened that the layers of sentient beings behind the mentor had become anxious. They used this means to stimulate him and get his attention, telling him it was time to clarify the truth to them.

Improving through memorizing and reciting the Fa

A German practitioner shared his experiences of memorizing and reciting the Fa. In the first few years of cultivation, he often could not guarantee the quality of his Fa study. He often felt drowsy and could not remember what he just read during group Fa study sessions. In early 2010 he slipped into a very bad cultivation state, feeling very tired. He had no energy whilst working either, feeling exhausted after a day's work. When clarifying the truth, he could not feel any energy behind his own words. His words could not really move others.

In recent articles, Master has emphasized more the importance of studying the Fa. So the practitioner began to memorize and recite the Fa. Even though he could only manage one or two paragraphs each day, he clearly felt that the quality of Fa study improved. Having memorized the Fa, he could clearly remember the content and structure of those paragraphs. Many principles that had been read many times, he could understand better after remembering them by heart. He could recall the principles in the face of trials and conflicts, and the distractions during exercises significantly reduced.

When clarifying the truth, his insecurity disappeared, without his paying much attention about what to say. He often felt that the words had been produced in another dimension. All he had to do was to say them aloud. In the past, people were often full of doubts after he finished clarifying the truth. But now a lot of people were eager to listen to him, and expressed opposition to the persecution in China.

This practitioner's work environment changed a lot too. He took the initiative to do things, with efficiency greatly improved. He no longer wanted to find a new job elsewhere in order to get better pay, but did his own job well. His colleagues also saw great changes. In the past, his colleagues had clouded faces and were depressed and tired. Even the once energetic boss often yawned. Now, many colleagues no longer feel exhausted, and they even talked about the positive aspects of the job. One colleague said to him: "You are always very happy. This means that practicing Falun Gong can make people very happy."

After the Fa conference, many practitioners shared the same feeling; no article presented at the Fa conference was about what the author did that had a certain effect. Instead, each and every speaker shared how they looked inward to improve themselves according to the Fa principles in the process of validating the Fa. The practitioners in the audience also looked inward to find any loopholes in their own cultivation. Everyone was moved and felt that they had gained a lot.

“We Are Witnesses to the Slave Laborers Who Plead for Help”

“Helping Practitioners in Tribulation and the Magic Tool of Looking Within ”