(Minghui.org) The Shandong Province No. 2 Forced Labor Camp is located at No. 29, Guanzhuang Township, Zhangqiu City. Since the CCP began its persecution against Falun Gong, Falun Gong practitioners have been mistreated there, mainly at the No. 7 and No. 8 division.

Case 1: Mr. Liu Shengzhu, a practitioner from Huancui District, Weihai City, Shandong Province, was sentenced to one-and-a-half years of forced labor. In April 2012, when a group of police officers from the Shandong Province Re-education Bureau came to the No. 8 Division, he cried out, “Falun Dafa is good! Truthfulness-Compassion-Forbearance is good!” Later, he was tortured by being hung from handcuffs and being brutally beaten by guards, including Li Gongming and Zhang Yuhua from the No. 8 Division, and inmates instigated by guards. Mr. Liu's term was extended for an additional month, and he was forced to sit on a small stool and face a wall for an entire day. Until now, he was forced to sit on a small stool after forced labor, and at night he was forced to sleep on the ice-cold floor. 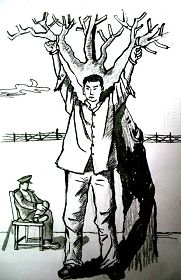 Case 2: Mr. Wang Shenghua, a practitioner from Huanghua City, was sentenced to one year and nine months of forced labor. Since April 12, 2012, after he declared void the three statements he had been forced to sign, he was tortured with the big hang up by guards. He was taken to the hospital twice for emergency treatment. The first time, he was taken to the No. 83 Police Hospital (the internal hospital of the labor camp). The second time, he was taken to the Jinan City Recovery General Hospital. He was in critical condition. He is unable to walk normally and needs assistance. Recently, while he was forced to work, he was verbally abused by guard Chen Lei.

Case 3: Mr. Yan Fulu, a practitioner from Licheng District, was brutally beaten by Li Gongming, Zhang Yuhua, and He Haijun (an inmate). Two-inch-wide wooden planks broke when they were used to beat him. As as a result, his left leg was completely black and blue.

Case 4: Mr. Yu Yingzuo, a practitioner from Daguan Village, Rushanzhai Town, Rushan City, was sentenced to two years of forced labor. He is resolute in cultivating Dafa and clarifies the truth to guards who do not know the truth. He was tortured by being hung from handcuffs, being brutally beaten, and being deprived of sleep. As a result, the left side of his body is numb, and he cannot speak clearly. He has been taken to a hospital for treatment.

Case 5: Mr. Li Jian is a practitioner from Huangshiliang Village, Caofan Town, Zhangqiu City. He has been handicapped, having only one forearm since he was a child. On June, 15, 2012, when he was clarifying the truth to a party secretary of a local village, he was reported. Now he is at the Shandong Province No. 2 Forced Labor Camp. This is the second time that he has been detained at a labor camp. Along with Mr. Zhang Hua, Mr. Meng Lingchen, and Mr. Zhu Lingdian, he clarifies the truth to guards, so they are all tortured by being forced to sit on small stools. Their right to family visitations and mail communications have been revoked. Currently, Mr. Li Jian and Mr. Zhang Hua are still forced to sit on small stools and to sleep on the cold floor.

Case 6: Mr. Li Fayao is a practitioner from Dongbeishangkou Village, Shangkou Town, Shouguang City. Before his arrest, Mr. Li, 66, was very healthy. He has been taken to detention centers six times. The first time, he was sentenced to three years of forced labor. The second time, in 2011, he was sentenced to one year of forced labor. His parents, in their 90s, are left at home without anybody to care for them. In March 2012, as a result of persecution, Mr. Li suffered a stroke and was released for treatment.

Case 7: Mr. Wang Huanzhong lives in the Dianqian Village, Pingdu City Development Zone, Shandong Province. On July 24, 2012, when he and his wife, Ms. Li Li, were distributing invitations to local people to attend the trial of Mr. Wang Guangwei, he was arrested by officers from the Taishan Road Police Station. He was sentenced to one year of forced labor and was taken to the Shandong Province No. 2 Forced Labor Camp. Ms. Li was taken to the Qingdao City Brainwashing Center where she was abused for 20 days. Later, she was held at the Dashan Detention Center in Qingdao City.

Case 8: Mr. Chu Liwen, a practitioner who lives in the Taibaozhuang Township, Xiashan District, Weifang City, Shandong Province, refused to act according to the illegal requirements of the guards. He was transferred to the ward where ordinary inmates are held. Recently, his daughter and son-in-law went to visit but were denied.

Places where practitioners were tortured at the No. 8 Division include the office of the chief, the guards' restroom, the psychological consultation room, the linen room, the storage room, and the library. There are no monitors at those locations, and during day time, these practitioners are tortured mostly in the guards' restroom, the office of the chief, and the psychological consultation room. At night, they are mostly tortured in the linen room.