(Minghui.org) The Divine Land Marching Band, consisting of 160 Falun Gong practitioners from Taiwan, Korea, Japan and Singapore, was invited to perform at the opening ceremonies of the First World Parliament on Spirituality held December 17-21, 2012, in Hyderabad, India. Several TV stations broadcast the live ceremony, and more than 100 million people watched. A few newspapers also reported on the convention for several days. Some spiritual leaders highly praised the performances of the Divine Land Marching Band, and some of them learned the Falun Gong exercises. The organizers issued an award to the band to express their appreciation. 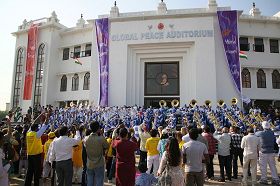 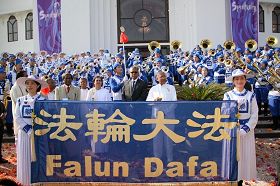 Spiritual leaders take a photo with the band 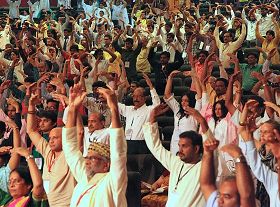 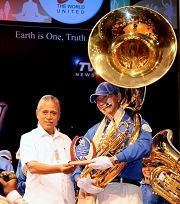 The organizer issues an award to the band 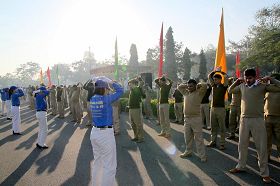 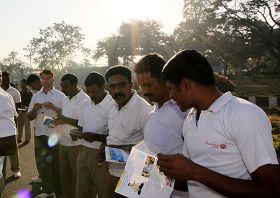 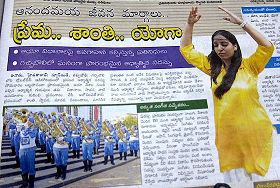 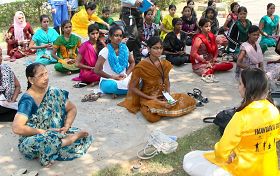 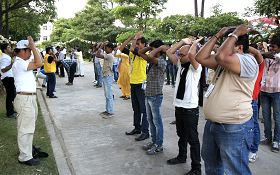 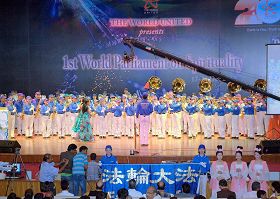 The Divine Land Marching Band performs in the convention hall

On December 18, the band performed in the convention hall. Several Indian ladies spread flower petals on the band members, expressing their appreciation. Practitioners also demonstrated the Falun Gong exercises. All the attendees learned the exercises. A local TV station broadcast the whole event.

After the performances, the organizers issued an award to the band. One of the organizers said: “We really appreciate your performing for us. We wish for the spirit of your band to stay in India.”

A 90-year old spiritual leader said: “I have never heard such a good performance. I wish that I could hear it again for the rest of my life.” He invited the band to perform in his community. He and other attendees learned how to say “Falun Dafa is good” in Chinese.

At the closing ceremonies, the band performed again. The convention concluded after all the attendees shouted “Falun Dafa is good” and “The world needs Truthfulness-Compassion-Forbearance.” Many tourists took photos of the band.

On the 18th, the band went to the “School of Excellence,” an elite private school from kindergarten to 12th grade in Hyderabad. All the students gathered at the square, welcoming the band. 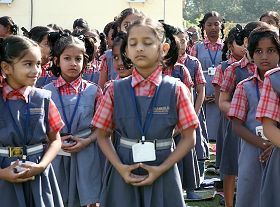 The teachers and students take a photo with the band 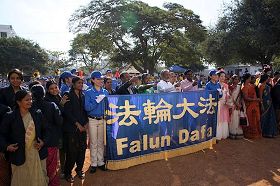 The teachers and band members shout “Falun Dafa is good!” 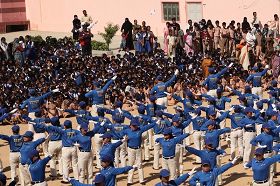 Later the same day, the band went to another elite Catholic school, Holy Mary High School. They performed and demonstrated the exercises. The local practitioners introduced Falun Gong to the teachers and students.

The principals of both schools told students that everyone should follow the principle of Truthfulness-Compassion-Forbearance.

On the 19th, the band went to a police department. Policemen learned about Falun Gong and the persecution in China. They also learned the exercises.

On the same day, the band visited another girls' school. The principal of the school had already started practicing Falun Gong, and had introduced it to the students. Falun Gong books are available in the school library. After the band's performance, the practitioners demonstrated the exercises. The student representatives shared their experiences of practicing Falun Gong. Practitioners also taught the students and teachers to sing “Falun Dafa is good” in Chinese.

The band also performed at a local book expo. They were warmly welcomed. Many people asked for detailed information on Falun Gong. 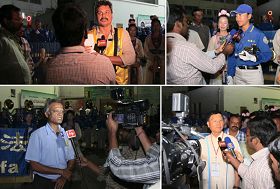 Hyderabad has a history of 400 years, and a population of 7 million. It is the sixth largest city in India. Many advanced technology and research institutions are located in Hyderabad. The theme of the First World Parliament on Spirituality was “Learning the time-tested principles of Peace, Joy and Healing aspects of the Spiritual Sciences and also establishing Spirituality as a base for all the transformational sciences and arts including Health, Education, Business & Management, Good-governance, Environment, Arts & Culture, and so on.” The aim of the convention was “to explore the underlying commonalities in a multitude of spiritual and holistic diversities.”