(Minghui.org) Ms. Chen Shulan from Beijing was once again illegally arrested and taken to the Changping Detention Center on December 16, 2012. All seven members of Ms. Chen's family practiced Falun Gong, but five of them have lost their lives as a result of the brutal persecution over the past more than 13 years. 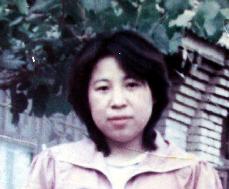 Ms. Chen's younger brother, Chen Aizhong, was tortured to death in Hehuakeng Forced Labor Camp in Tangshan City on September 20, 2001. Ms. Chen's younger sister, Chen Hongping, had her legs broken when guards at the Gaoyang Forced Labor Camp beat. She was tortured to death on March 5, 2003. Ms. Chen's other brother, Chen Aili, ended up in critical condition after being tortured in Jidong Prison in Fengnan County, Tangshan City. He died on November 5, 2004.

Ms. Chen's parents lived away from home to avoid the persecution. Her mother Wang Lianrong died on August 4, 2005. Her father, Chen Yunchuan, went to Beijing Women's Prison in the fall of 2007 to visit his daughter. The guards denied him entry, supposedly because he didn't have his identification card with him. He was not even allowed to leave his daughter any clothes or money. He later died in a car accident.

For more details about the persecution of the Chen family, please read:
"Long-Term, Bloody Persecution Reduces a Seven-Member Family to Two" http://en.minghui.org/emh/articles/2009/6/9/108135.html

Ms. Chen Shulan's daughter, Li Ying, was only 10 years old when her mother was illegally sentenced to seven and a half years in prison in 2002. These are things a child that age should not have to endure. Ms. Chen's family only wanted to tell people that Falun Dafa is great, but they were torn apart due to the CCP persecution.

Ms. Chen was released from prison in 2010. After numerous trials and tribulations, she was finally reunited with her daughter, who had been missing for almost eight years.

Ms. Chen does not bear a grudge against the CCP agents for the crimes they committed against her and her family, but continues to tell people, “It's really great to practice Falun Gong.” She has now been arrested again and is being held at the Changping Detention Center.