(Minghui.org) From August 31 to September 2, 2012, the 10th annual WorldFest was held in downtown Louisville, Kentucky. The Falun Dafa information booth attracted many visitors at this popular international festival. 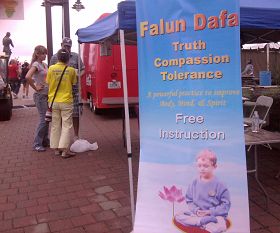 At WorldFest in Louisville, Kentucky, the Falun Dafa booth attracted many visitors.

A large Falun Dafa banner could be seen from afar. Many people came to the booth to learn more about the spiritual practice. Some listened to the introduction of Falun Dafa, while many also learned how to make paper lotus flowers.

Some people learned the exercises on site, while others wrote down contact information to join the free teaching classes in the future. The practitioners patiently answered people's questions. One visitor said, “Falun Dafa can release stress and pressure, this is exactly what I need.”

When they learned that a brutal persecution of Falun Gong is still going on in China, many people said they couldn't understand it. The practitioners told them that the Chinese Communist Party (CCP) is based on atheism and class-struggle, which contradicts Falun Dafa's belief in Truthfulness-Compassion-Forbearance. If more Chinese came to believe in Truthfulness-Compassion-Forbearance, the CCP feared that it would lose ideological control of the people. The persecution of Falun Dafa has now lasted over 13 years, during which time the CCP has generated all kinds of false propaganda to defame Falun Dafa in the world. However, Falun Dafa practitioners have been consistently clarifying the truth.

Over the three days of the festival, over 1,000 people came to the Falun Dafa booth and left with the seeds of Truthfulness-Compassion-Forbearance planted in their hearts.