(Minghui.org) The World Organization to Investigate the Persecution of Falun Gong (WOIPFG) recently published new evidence of the Chinese Communist Party's (CCP) organ harvesting from living Falun Gong practitioners in China. The evidence includes several recordings of phone calls made to Li Changchun, member of the Politburo Standing Committee and former Guangdong Provincial Party Chief; Zhou Yongkang, secretary of the Political and Legislative Affairs Committee (PLAC) and secretary of the Central Committee for Comprehensive Social Management; Chen Rongshan, chief of the Department of Organ Transplant at People's Liberation Army 205 Hospital in Jinzhou; and officials at the People's Liberation Army 307 Hospital in Beijing. 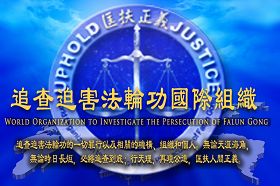 Special attention should be paid to the phone call to Li Changchun. The investigator from WOIPFG phoned Li Changchun in the name of the chief of Luo Gan's office (Luo Gan is a former member of the Politburo Standing Committee). In the phone call Li explicitly admitted that Zhou Yongkang is in charge of harvesting organs from Falun Gong practitioners. Also, the investigator from WOIPFG called Zhou Yongkang in the name of Li Chuncheng, the Sichuan Provincial Party chief. In the phone call Zhou did not deny the existence of the secret jails for Falun Gong practitioners. He just insisted in talking about it over a secure line.

In the phone call to Chen Rongshan of the People's Liberation Army 205 Hospital, Chen admitted that some of the organs transplanted in his hospital are from Falun Gong practitioners, and that this is proved by the courthouse. He also admitted that several hospitals in China are involved.

In the phone call to the official at the People's Liberation Army 307 Hospital in Beijing, in charge of the kidney sources, he admitted that their kidneys are from Falun Gong practitioners, and said that several government offices and police offices are involved. The official said that since the labor camps could not offer as many kidneys as they had before, most of the kidneys nowadays are from prisons in Chaoyang, Haidian, and Xicheng Districts in Beijing. Usually the buyers need to pay 200 thousand yuan. This person also said that most arrested Falun Gong practitioners didn't reveal their names and where they were from, so on the registration book, they only have a number as their identification [Note: because of the CCP's policy of implication, Falun Gong practitioners often refuse to give their names when they are arrested, in order to protect family members, colleagues, and associates].

The WOIPFG has been investigating allegations of organ harvesting from illegally imprisoned Falun Gong practitioners since 2006. The results of the extensive investigation have verified the existence of this crime, and that most organs are from practitioners who appealed for justice for Falun Gong, but didn't reveal their names when they were arrested. They only have a number in the hospital documents. The organ harvesting reached a peak in 2003, and was not a secret. After 2003 the practice continued, but was done more secretly.

David Matas, a Canadian human rights lawyer, and David Kilgour, a former Canadian diplomat, have investigated the allegations of organ harvesting since 2006. They have collected a considerable amount of evidence, also verifying its existence.

The WOIPFG investigator phoned officials at the Intermediate People's Court of Jinzhou, the First Division of Criminal Law. The investigator asked, “I only know that since 2001, we have been obtaining kidney donors from courts and detention centers, from those donors who are young and healthy and practice Falun Gong. Now there are fewer such donors. So we don't know if your court is still able to provide such donors.” The official answered, “That depends on your situation, and we also have to discuss with our superiors. If everything is in good standing, we might be able to provide it.”

Upon asking a doctor at the Department of Kidney Transplantation at Minzu Hospital in Guangxi how to get a kidney quickly, the doctor said, “If you want to get it fast, you should contact Dr. Liao at the Third Hospital of Zhongshan University in Guangzhou. They have easy access to organs. Every week, they conduct seven or eight liver transplants and more than ten kidney transplants.” The doctor also admitted that the local courthouse is involved in the organ transplants.

On July 20, 2012, the WOIPFG published the electronic book Investigation Reports on the Persecution of Falun Gong. It is comprised of 22 volumes, including 203 reports, and 4200 separate pieces of evidence. The second volume is specifically about evidence of organ harvesting. 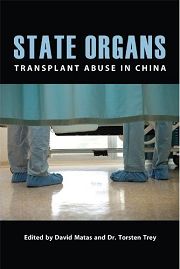 The new book State Organs, explores the practice of organ harvesting from prisoners of conscience in China

A new book entitled State Organs, about the harvesting of organs from living Falun Gong practitioners, was also published in July. Edited by David Matas and Dr. Torsten Trey, executive director of Doctors Against Forced Organ Harvesting (DAFOH), the book is a compilation of essays written by authors from seven countries who share their views and insights on the ways to combat the organ harvesting crimes in China.

On May 24, 2012, the U.S. State Department issued the 2011 Human Rights Report, which noted that media outlets and human rights groups have reported cases of organ harvesting from living Falun Gong practitioners in China. According to David Kilgour, who with David Matas co-authored Bloody Harvest – the killing of Falun Gong for their organs, the 2011 Human Rights Report shows that the U.S. government believes that there is enough evidence to support allegations of the organ harvesting.

It is also worth noting that since June 2011, the U.S. State Department added a new question to its non-immigrant visa application form DS-160, “Have you ever been directly involved in the coercive transplantation of human organs or bodily tissue?” 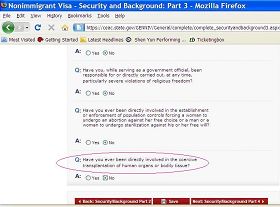 Mr. Matas commented on the new question: "This is useful. It is a good precedent for other countries. I will suggest that the question be added for Canada. The answer of every visa applicant is likely to be no. Yet, the question serves a purpose because a person can lose status once acquired by answering this question incorrectly. The question should be added to the immigrant visa applications."