Ms. Gao Suzhen from Shijiazhuang City Detained for Signing a Petition to Rescue a Falun Gong Practitioner; Her Husband Arrested and His Current Whereabouts Unknown

(Minghui.org) More than 700 villagers from Zhengding County, Hebei Province jointly signed a petition to demand the release of Falun Gong practitioner Mr. Li Lankui, who was illegally arrested on June 7, 2012. After the incident was widely covered in the media, these villagers have been harassed, threatened, arrested, and detained by Chinese Communist Party (CCP) agents. Ms. Gao Suzhen and her husband Zhang Tianqi were among those detained.

Ms. Gao, in her 50s, from Xiaojiaying Village, Shijiazhuang Province, was arrested on the evening of August 7, 2012. Participating in the arrest were officers from Hebei Province State Security Division, the 610 Office, Shijiazhuang City Police Department, and Zhengding County Police Department. They told Ms. Gao's husband, Zhang Tianqi, to accompany her. The perpetrators confiscated their computer, Shen Yun DVDs, and other personal belongings.

Ms. Gao was sent to No. 260 Hospital that same night for emergency treatment and later transferred to the Zhengding County Special Investigation Group for the “700-Signature Petition Incident” to be tortured in order to extract a confession. Ms. Gao is currently being held in the Shijiazhuang City No.2 Detention Center.

The police station released Ms. Gao's husband on August 8. However, according to the villagers, police covertly arrested him shortly after. His whereabouts are still unknown.

In June 2012, a governor from the United States visited Zhengding County, Hebei Province. The CCP agents arrested Falun Gong practitioner Mr. Li Lankui from Dong'anfeng Village. More than 700 local villagers jointly signed a petition to demand his release and wrote a letter to the governor in the U.S. to call the matter to his attention. Regime authorities dispatched officials to Donganfeng Village. They harassed and threatened the locals, and also arrested Mr. Li Lankui's family members and Falun Gong practitioners in an attempt to find out who posted the petition with 700 signatures on the Internet.

The recent large-scale arrests began on August 1. Fifteen practitioners, along with their family members from Zhengding County and Shijazhuang City, were arrested and detained. While practitioner Ms. Yang Yinqia was being arrested, she fell from a building and died. Mr. Jia Zhijiang's whereabouts are unknown. His wife Li Rongmei was sent to the Shijiazhuang Brainwashing Center, and their child, who had just graduated from an elementary school, is left alone at home without their care.

All 15 people were covered with black hoods and forcibly taken away from their homes. Their homes were all ransacked. It is believed that they were held in the Shijiazhuang City No.1 Detention Center, where they were subjected to various forms of physical abuse and torture, such as being tortured on an iron chair, deprived of sleep, ruthlessly beaten, and shocked with high voltage electric batons. Three Falun Gong practitioners were sent to a forced labor camp on August 29.

However, those with a strong conscience were undeterred. A third group of people, a total of 903, have signed the petition, once again calling for an end to the persecution of kind Falun Gong practitioners. 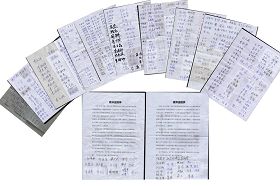 The third group of people, a total of 903 from Hebei Province, have signed in support of Mr. Li Lankui

Detailed information about Mr. Li Lankui's arrest and the 700-signature petition to demand Mr. Li's release can be found in this article:
“Over 700 People Join in Effort to Rescue Mr. Li Lankui (Photos)”
http://en.minghui.org/html/articles/2012/8/5/134795.html