(Minghui.org) In early June 2012, Chinese regime's deputy head Xi Jinping invited the governor of Iowa from the United States to visit Xipingle Township, Zhengding County, Hebei Province. In prepearation for the visit, the county 610 Office and police department intensified their persecution of Falun Gong practitioners. Mr. Li Lankui, a local practitioner, was illegally arrested and is currently detained in the Shijiazhuang Brainwashing Center.

Local residents have decried the unlawful persecution of their neighbor. Over 700 people have signed a petition calling for Mr. Li's immediate release, with 703 signatures and fingerprints collected to date. Friends and relatives have also sent a letter to the governor of Iowa, Mr. Terry Edward Branstad, to call for his assistance in this case. 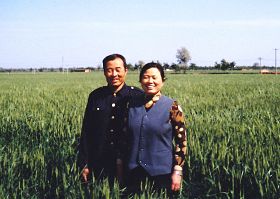 Mr. Li Lankui and his wife

Over 700 people have signed a petition, complete with their fingerpints, to demand Mr. Li's release.

On the morning of June 1, 2012, 20 to 30 agents from the Zhengding County 610 Office and the Zhengding Police Department drove in 4 police cars to Mr. Li's home in Donganfeng Village, Xipingle Township. Mr. Li was at work at the time. The police broke into the house and forced Mr. Li's family members to help them to look for him. Once they found Mr. Li, they forced him to sign a form to give up practicing Falun Gong.

The officers subsequently pushed Mr. Li into a police car. His nearly 80-year-old mother rushed to the vehicle and grabbed him, not willing to let him go. Mr. Li's neighbors also intervened. They surrounded the policemen and tried to reason with them: “Li Lankui is a virtuous man. Why do you often harass such a good person?” More and more people then gathered around to condemn these policemen's unlawful actions.

Due to people's strong intervention, the agents did not succeed in carrying out the arrest. However, the 610 Office did not give up their pursuit and began to track Mr. Li's whereabouts. They dispatched several plainclothes officers to monitor him.

During this period, Mr. Li had a brief conversation with the owner of a waste station. Subsequently, this person was harassed and threatened by authorities, who demanded to know what Mr. Li had said to him. Police extorted 1,500 yuan in cash and took away several thousand yuan worth of goods from the owner. They also threatened at least 10 other villagers with arrest.

On June 7, 2012, 4 to 5 police officers secretly arrested Mr. Li and took him to the Zhengding County Detention Center. Authorities did not inform Mr. Li's family of the arrest. The family subsequently inquired about Mr. Li's whereabouts around the village and were able to find some clues. They then went to the Xipingle Police Station to request Mr. Li's release. Their request went unanswered.

Seven days later, officials sentenced Mr. Li to 1 year and 3 months in prison. When his family went to the Zhengding County Detention Center to bring him some clothes, the guards forced them to pay 750 yuan for Mr. Li's living expenses.

Mr. Li has since been transferred to the Shijiazhuang City Brainwashing Center.

Prior to practicing Falun Gong, Mr. Li had been in very poor health. Due to a lumbar herniated disc, he was forced to stay in bed and was unable to work for 2 years. Under the enormous pressure of life, his temper also became increasingly worse, causing disharmony in the family. He was introduced to Falun Gong in May 1999, and his health and temper dramatically improved within only a month of practice. He became optimistic and began working as a waste collector to make a living. The miraculous change shocked many of the villagers, and as a result, many of Mr. Li's neighbors also took up the practice at that time.

Since the communist authorities began persecuting Falun Gong in July 1999, Mr. Li has suffered greatly at the hands of the regime. He has been arrested 3 times for his faith.

Around 1 a.m. on November 26, 2008, a train carrying foreign dignitaries and national leaders nearly derailed because someone had put stones on the tracks. The Railway Police Department, the Shijiazhuang Railway Police Department and local police dispatched more than 100 officers to solve the crime. The police could not find a clue, however, and decided to frame Falun Gong practitioners. With the guidance of the village Party head Li Wenmin, they arrested 300 practitioners, including Mr. Li, who was then illegally detained.

Over 700 people join in effort to rescue Mr. Li Lankui

The authorities' continued harassment and persecution of good people over the years has arroused a strong sense of dissatisfaction among the residents of Zhengding County and the surrounding areas. Thus, more than 700 people spontaneously joined in the effort to rescue Mr. Li following his most recent arrest, signing a petition to demand his immediate release.

On July 4, 2012, residents hung up balloons and banners with the words "The World Needs Truthfulness-Compassion-Forbearance," "Freedom of Belief; Stop the Persecution" and similar slogans to further draw attention to this case. The balloons were released into the air around the local airport and residential areas. 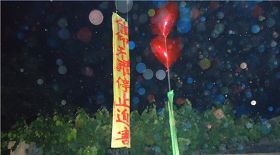 Banner with the words "Faith Is Innocent; Stop the Persecution" hangs in the local village.

Mr. Li’s friends, relatives and neighbors have also sent a letter to Mr. Branstad, the governor of the state of Iowa in the U.S., calling for his help to rescue Mr. Li.

“How Effective Is Our One Thought? ”