(Minghui.org) According to TVBS Television in Taiwan, a Taiwanese film entitled “The Forgotten Declaration of Geneva” was removed from the list of films registered for the 2012 Taipei International Short Movie Festival by the organizers. The festival is sponsored by the Taiwanese and Chinese governments, and this film tells the story of organ harvesting in China. The organizers of the competition refused to give any reason for their action. 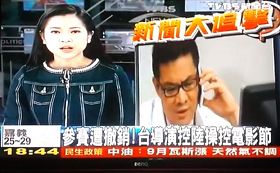 The TV report on the incident by TVBS

Before the film was removed by the organizers, it was ranked in the top 5 on the list, and had more than 1300 downloads in 8 days. The supporters expressed that as the movie describes the organ harvesting in China, and makes the audience think, it was removed because the Chinese Communist Party (CCP) wanted to cover up the truth.

While the movie about organ harvesting in China is restricted in Taiwan, another movie with a similar theme has been shown in Korea since August 30. The plot of The Traffickers, originates in a true story. In 2009, a newly-wed Korean couple traveled to China, where the wife was kidnapped and then murdered, with all her organs stolen. The movie reveals a chain of organ trafficking between China and Korea involving surgeons, Chinese police, customs officials, and businessmen.

To make the movie, in 2009 director Kim Hong-seon began studying the details of the trade and harvesting of organs in China. He hoped to expose the secret practices of organ harvesting to the public through the film.

The film has been aired in more than 450 theaters in Korea, and more than one million people watched it in 8 days. 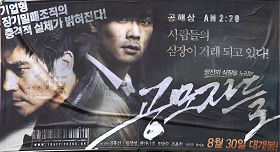 The poster of The Traffickers

Actually these two films only reveal the tip of the iceberg of organ harvesting in China. In March 2006, the overseas media first reported that the CCP harvests organs from living Falun Gong practitioners for profit. In August 2006, Manfred Nowak, the United Nation Special Rapporteur on Torture, and Asma Jahangir, the UN Special Rapporteur on Freedom of Religion and Belief, requested the UN Anti-torture committee to investigate organ harvesting in China. In November 2008, the UN requested the Chinese government to allow independent investigators to look into allegations of organ harvesting from live Falun Gong practitioners.

On May 24, 2012, the U.S. State Department published the 2011 Human Rights Report. The report addressed the issue of illicit organ harvesting in China, mentioning Falun Gong practitioners and Uighurs. The report said: “In response to allegations that the organs of executed prisoners were harvested for transplant purposes, Vice Minister of Health Huang Jiefu in 2009 stated that inmates are not a proper source for human organs and prisoners must give written consent for their organs to be removed. Overseas and domestic media and advocacy groups continued to report instances of organ harvesting, particularly from Falun Gong practitioners and Uighurs.”

In July 2012, David Matas, a Canadian human right lawyer, and Torsten Trey, a founding member and Executive Director of Doctors Against Forced Organ Harvesting, co-edited and published the new book State Organs. According to the book's description by McNally Robinson, China’s organ transplant numbers are second only to the United States. Unlike any other country, virtually all Chinese organs for transplants come from prisoners. Many of these are prisoners of conscience. The killing of prisoners for their organs is a plain breach of the most basic medical ethics. State Organs explores the involvement of Chinese state institutions in this abuse. The book brings together authors from four continents who share their views and insights on ways to combat these violations. State Organs aims to inform the reader and to influence change in China to end the abuse. The book is number three on the top bestseller list of Winnipeg, Canada on September 2, 2012.

On September 12, the U.S. Congress heard testimony on Organ Harvesting of Religious and Political Dissidents by the Chinese Communist Party.

"To rip open the body of someone who is simply involved in a religious or personal or political idea that is contrary to the wishes of the ruling elite, and not a physical threat to the regime, this is about the most monstrous crime that I can conceive of,” Representative Dana Rohrbacher (R-CA), who chaired the session, was quoted as saying in the Epoch Times. Rohrbacher also addressed the journalists present in the room, urging those who hadn't done so to report on the topic. "This possibility—and this probability—pushes us into the horrific beyond that challenges our language, making 'barbaric' too calm of a word," said Representative Chris Smith (R-NJ), according to AFP.

“Most experts put the number of executions each year anywhere from 2-8,000 per year, which falls short of the numbers given by different sources in China, including Dr. Jiefu," said Dr. Damon Noto, spokesperson for the group Doctors Against Forced Organ Harvesting (DAFOH) in his testimony. “Even if they executed 10,000 a year and transplanted 10,000 a year, there would still be a very large discrepancy. Why is that? It's simply impossible that those 10,000 people executed would match perfectly the 10,000 people that needed the organs."

Dr. Noto says several investigations suggest the gap is filled by prisoners of conscience, especially detained practitioners of Falun Gong. Tens of thousands of Falun Gong practitioners are held, pre-screened (for blood type and other criteria required to match an organ to a patient) and killed on-demand in order to extract organs to fuel the transplant industry in China, which generates hundreds of millions of dollars in revenue. 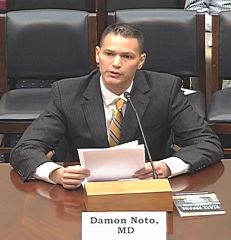 Dr. Damon Noto, spokesperson for the group Doctors Against Forced Organ Harvesting (DAFOH) at the hearing

Torsten Trey, the co-author of the book State Organs, pointed out that “killing for organs became part of transplant medicine in China, and governmental institutions, including police, courts, military and doctors in hospital, are involved in this crime. He said that the CCP is the major factor in the organ harvesting.

“Enlightening to the Importance of Diligent Fa Study ”

“Diabetes Cured after Practicing Falun Gong for One Month”