Client Exclaims: “You are Indeed a Falun Dafa Practitioner!” (Photo)

(Minghui.org) Mr. Chen Shaohong felt extreme regret and couldn't forgive himself. He wished that he could reverse time, but that was impossible; it was like water that can't be recollected once it's poured on the ground. The old saying goes: “You can always gain something from your experience”, yet it can be too costly.

Mr. Chen's wife suffered from abdominal pain. A Chinese doctor said that it was due to a stretched stomach ligament. They then turned to western doctors for help, and went to the local women's hospital for an examination, during which she was given a general anesthetic. Mr. Chen said: “I listened to the doctor and made a wrong decision for my wife to have surgery at the time. I should have told the doctor that we would go to a main hospital for another checkup and then decide. However, I immediately made the decision on behalf of my wife to have the operation, while she was under anesthesia. As a result, her bodily functions became unbalanced, leading to many incurable diseases.”

Since western medicine didn't help either, they turned to other Chinese medical doctors. Mr. Chen and his wife went to see a well-known doctor once a week. He also got cold medicine for himself. For several years, they routinely visited this doctor once a week. 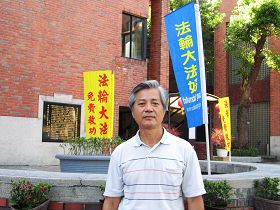 From Skepticism of Divine Beings and Buddhas, to becoming a Strong Believer

In September 2002, a friend that I hadn't been in contact for ages came to visit. She saw that Mr. Chen was not in good health and explained to him that Falun Gong has the power to improve a person's health, and that the practice had spread to all walks of life. Intellectuals, peasants, workers, businessmen and students were all practicing Falun Gong. She added that so many people were practicing Falun Gong that the number was increasing daily and occupied every corner of Taiwan. In parks, school campuses and other public venues, there were people practicing Falun Gong every day.

At 5:00 a.m. the next day, Mr. Chen went to the park to have a look. He saw practitioners performing the exercises, and from the pamphlet given to him by a practitioner, he found the address for the nine-day lectures to be held at Tongshan Street in Taipei. On September 21, the couple attended the first nine-day lecture class and became Falun Gong practitioners.

Mr. Chen said: “After I finished watching Teacher's lecture on the first day (of the nine-day-lecture session), I went straight to the nearby bookstore and bought a copy of the book Zhuan Falun. When I finished reading it the first time, I realized that this book taught people to be good, how to interact well with others, and showed me guiding principles for teaching my children. I went to the bookstore again, bought several more copies and gave them to my brother and other relatives. When I read the book the second time, I understood that it taught people how to practice cultivation. I was very touched. I was very skeptical about the existence of divine beings and Buddha, and I didn't change my notions easily. I hate to be restricted, but Falun Dafa is not a religion and there aren't any formalities or restrictions. If you want to learn, it's your choice; if you want to stop, then just leave. This is very easy and convenient. The main point is to cultivate your heart; it doesn't interfere with daily work. Subsequently, I started practicing Falun Gong. I witnessed and experienced many supernormal events which led me to completely believe in the existence of divine beings, Buddha, heaven and hell. The principle “Good is rewarded with good and evil will be punished” indeed exists.

The couple practiced Falun Gong with determination since they started, and received significant benefits from the practice. Their gratitude is endless. They no longer visit Chinese or western medical clinics or hospitals. Mr. Chen's wife's disease disappeared. He originally started practicing Falun Gong just to accompany his wife. He said: “My health has greatly improved since I started practicing. This was something I didn't expect to happen.” He used to catch colds easily and have toothaches and mouth inflammation. On the seventh day of practicing Falun Gong, he developed cold symptoms and took some medicine. The cold immediately disappeared, which was not the usual case. He then believed that he would be healthy without the medicine. Since that time, he has not taken medication, and his health is better than before.

After he had practiced Falun Gong for four months, Mr. Chen was cleaning the floor and stairs on the second floor one day. The stairs were indoors, and he tried to climb up to clean the rail above the stairs. He slipped and fell on his back from nearly one meter high, then slid down three steps before he stopped. He could barely breathe, and couldn't call for help for three or four seconds. He felt extreme pain in his back and right foot. He struggled to get up. Once he was up, he looked at his foot, and saw a puncture wound on the sole of his foot which was bleeding. He thought: “I am now a practitioner. I will be all right because Teacher is here, and I also have the Fa.” He then went to the restroom and washed away the blood. He acted as if nothing had happened. He went to work, practiced the exercises and studied the Falun Dafa teachings as usual. Four or five days later, he felt pain in his chest. Whether studying the Fa, at work or trying to sleep, he felt pain. Before practicing Falun Gong, he would've gone to see a doctor and taken medicine. Now, he didn't worry and was not afraid in the least - he just lived his normal life with ease.

One morning several months later, he went to buy some breakfast and discovered that he could keep his back straight. The fall and the pain resulted in straightening his hunchback, which he'd had for several decades. This was an unbelievable feeling – being able to walk with a straight back! He murmured from his heart: “Thank you Teacher for straightening my hunchback.” He said: “From that moment on, my back has been straight.”

Client's Praise: You are Indeed a Falun Gong Practitioner!

Though Mr. Chen was good-natured, this didn't mean that he never got angry. Whenever he became angry, he kept it to himself. However, when his anger reached a certain level, he had a terrible blowup. He shouted at his son and smashed the desk. The couple used to quarrel over each other's siblings. Sometimes the fights became physical, and someone got hurt. After practicing Falun Gong, he adopted the method of reasoning and guiding his son, which was more effective. During conflicts, the couple looked within first, and measured their thoughts and acts with Falun Dafa principles. They regretted whenever they failed to maintain their xinxing.

Before practicing Falun Gong, he never apologized to anyone after offending them. Now, he says: “Apologies! I shouldn't have lost my temper just now.” His wife said: “He's never said 'I'm sorry' before. Since practicing Falun Gong, he now apologizes to me. He is so different.” Mr. Chen said: “I realized that when you keep reading the book Zhuan Falun, even though you don't try to do anything, you will find that you've become better through the process of studying the Fa.”

They are both a couple and colleagues, being employees and the heads of their business. The family business of circuit planning design service is very stable and they have regular customers. Their customers all know that they are Falun Gong practitioners. In recent years, many clients turned to the China market for development. Though they knew that these clients would not give them any business, they gave all their designs to the clients for free - not like other business owners who kept some designs to themselves. The clients then kept giving them business until they found reliable suppliers. They preferred going across the strait to ask them to design for them. One day, a client sent them a check totalling 20% more than the amount owed - by mistake. They returned the check with an explanation. The client immediately replied in gratitude by email. He exclaimed: “You are indeed Falun Gong practitioners!”

People Around the World: I Know that Falun Gong is Great!

The couple knew that if their classmate hadn't introduced them to Falun Gong, they would still be suffering and struggling from diseases. As practitioners, they felt the responsibility to introduce such a wonderful practice to other people, and explain Falun Gong to them. They participated in the truth-clarification projects after several months of practicing. During their free time or on weekends, they took turns distributing Falun Gong pamphlets and other truth-clarification materials on busy streets. More and more people learned the facts about Falun Gong. They took the materials and said: “Wow! Falun Gong is really good!” Some people come to Taiwan on holidays, or to visit relatives. One day, a man took the material and said: “I know about Falun Gong. I saw them in the U.S. - I know that Falun Gong practitioners are very good!”

Practitioner Zhong Dingbang, manager of a high technology company in Hsinchu, Taiwan was arrested on June 18, 2012 on a fabricated charge while visiting his relatives in Jiangxi, China. He was detained for 54 days, and not released until August 11, when he returned to Taiwan. During this period, the couple took part in a campaign to collect signatures to help rescue Zhong Dingbang. They told people about the goodness of Falun Gong and facts about the Chinese Communist Party's (CCP) persecution.

One day, the signature collection didn't go smoothly. Mr. Chen was a bit upset when people refused to sign. Two ladies and a man in their sixties came up to him. One woman said while she was signing: “I know about Falun Gong. I know about the Zhong Dingbang incident from the media report. I wanted to sign my name, but couldn't find where to go. I have been looking for you for quite some time. I've been waiting for you for a long time.” Mr. Chen felt somewhat guilty after listening to her. He committed to making more effort in the future, so that people will not miss the opportunity to express their views.