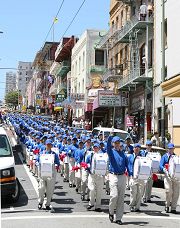 Abraham is the director of the Divine Land Marching Band of the Western United States. He regularly performs in Falun Gong parades in San Francisco. 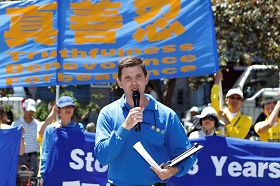 Abraham Thompson is a civil engineer. A few months ago, he was appointed as a human rights committee member in San Jose.

Abraham started to practice Falun Gong in 2002. Not long after that, he began to make pamphlets to raise awareness about the persecution of Falun Gong. Nowadays, you can see him participating in all kinds of activities to call for an end to the persecution.

Both of Abraham's parents are devout Catholics. He said that he believed in God since he was very young, but still he had many doubts about the purpose of life. He was also interested in Buddhism, Taoism and other Eastern religions. He read some books about Buddhism, but he did not find what he was looking for. In addition, he often saw in another dimension a big eye in the middle of his eyebrows looking at him, which made him very confused. He was always searching and exploring for an answer.

Abraham grew up in Santa Cruz, which is a coastal city famous for alternative community lifestyles and water activities, like surfing. Abraham had been switching between different beliefs, trying to decide which religion to believe in. For a long time, he felt life was not meaningful. Study, work, even surfing which he used to be fond of, could not satisfy his soul.

One day in 2002, one of his friends told him about the book Zhuan Falun which is very good, but it was hard to find since it is not sold in every bookstore. Abraham searched for it online right away and bought it. After he received the book, he began to read it. At that moment, he knew he had finally found what he had been seeking for so long.

Talking about how he got the book Zhuan Falun, Abraham said there was a story about it. His friends were heavy drinkers and drug users. He had these bad habits as well, being affected by the environment. However, one day, he suddenly realized that he should not go on like this. So he quit drinking and doing drugs. Two months later, he bought the book Zhuan Falun. He said, “After studying Dafa, I realized that Master had already been taking care of me even before I started practice because I had the will to practice.”

Abraham was amazed that the book addressed all of his questions and helped him understand his unusual experiences, like the eye he had seen in another dimension. He had a sense of peace that his search was finally over. At the beginning, since Abraham did not know anybody who practiced Falun Gong, he studied on his own and learned the five exercises by watching the video.

Within three months of practice, Abraham had many remarkable experiences. One time when Abraham was practicing the second exercise, he saw a white Law Wheel on his arm even though his eyes were closed.

One night when he was sleeping, his life flashed before his eyes, similar to a near-death experience. He watched his whole life and all the bad things he had done. Then he saw a strong white light that poured into his body through the top of his head and then went out from his head again. He believed that he was seeing his body being purified in deeper dimensions as a result of his practice of Falun Dafa.

Clarifying the Truth about Falun Gong for Others' Sake

After learning the practice, Abraham not only read the books and did the exercises, but also took a bus (which took about 5 hours) to San Francisco to tell people how Falun Gong is persecuted in China. What prompted him to do this?

Abraham said that when he read Lecture Three in Zhuan Falun, about the ‘heart is devoted to saving people’, he was deeply moved. It says in the book,

"On one occasion I had my mind connected with four or five great enlightened people and great Taos from extremely high levels. Speaking of high levels, their levels were so high that everyday people would find it simply inconceivable. They wanted to know what was on my mind. I have practiced cultivation for so many years. It is absolutely impossible for other people to read my mind, and other people's supernormal abilities cannot reach me at all. Nobody is able to understand me or know what is on my mind. They wished to know what I was thinking. With my consent, therefore, they linked my mind with theirs for a period of time. After the connection, it was a little unbearable for me because no matter how high or how low my level is, I am among everyday people and still doing something purposeful—that is, saving people—and my heart is devoted to saving people."

Abraham said, “What I think about in my life is work, money, house and things related to everyday life. But Master is thinking about saving people all the time. So I realize that I should do more to help others.”

There was a period of time when he went to San Francisco by bus every day to raise awareness. He read a lot about the persecution of Falun Gong practitioners and made flyers and banners himself as well. Later he also set up a table on the street to raise awareness.

Not only does Abraham study Chinese, but he also married a Chinese woman and they had a son who is now three years old.

According to what Abraham understood from “20th Anniversary Fa Teaching” in New York Fa Conference on May 13, 2012, Master cherishes every single life and sees every life as precious because most lives are from higher levels. This encouraged him a lot. He found that although he attended many activities, he began to lose his sense of the preciousness of all lives. He would no longer have this in mind while he went shopping or walked on the street. He realized that he was wrong. No matter what they look like, their lives are all precious and he must tell them about Falun Gong and the persecution.