(Minghui.org) On June 29, 2012, the family of Mr. Zhang Hongwei, a Falun Gong practitioner who has been detained for twelve years, went to visit him at Jilin Prison's Ward No. 11, a ward where the elderly and the disabled are held. The prison used the pretext of seeing Mr. Zhang reading Falun Dafa literature and his family's concern and inquiry about his present condition to terminate their visit and threaten his family.

Mr. Zhang, over forty years old, is a Falun Gong practitioner in Tonghua, Jilin Province. In 2001 he was illegally sentenced to thirteen years of imprisonment for producing truth-clarification materials on Falun Gong and the persecution in Beijing. The same year he was sent to Tiebei Prison in Changchun. He protested his detention by refusing to eat for 53 days.

In March 2002, Mr Zhang was sent to Jilin Prison and cruelly tortured. He was put in solitary confinement for two years. He suffered many forms of torture including the “Death Bed,” the “Big Hang-up,” and was beaten savagely and stretched on the “Stretching bed” several times. The prison refused to let his family visit. His family pressed charges at the procuratorate. Mr. Zhang was finally released from solitary confinement in August 2004, when he was in critical condition.

In the beginning of 2006, even though Mr. Zhang was diagnosed with class 3 pulmonary tuberculosis in both of his lungs, had body fluid accumulating in his chest and abdomen, pleurisy and heart disease, the prison guards still directed criminals to torture him, causing his condition to worsen.

Mr. Zhang, who once was very healthy, had just turned 40 years old. His family demanded that he be released on bail for medical treatment based on his weak condition. The prison wouldn't release Mr. Zhang because he was unwilling to give up his belief in Falun Dafa. The prison guards, including Sun Zhigang, reacted to the family's reasonable and legitimate request by intimidating and threatening them, and persecuting Mr. Zhang more severely.

On June 29, 2012 the prison guards informed Mr. Zhang's family when they tried to visit him that all visitation rights had been suspended. When the family inquired further as to why his rights had been taken away, Sun Zhigang, the captain in the ward responsible for “reforming” practitioners, said, “Zhang Hongwei was found reading Falun Dafa literature, which was subsequently confiscated. This is the world of the Chinese Communist Party (CCP) and the CCP doesn't allow this so we have suspended his visitation rights for 3 months. Not only can't you visit with Mr. Zhang, but if you call we won't let you speak with him. The more you try to seek help through higher authorities, the more severely we will persecute Zhang Hongwei.” Sun Zhigang shouted at the family, “We may not be able to persecute you but we will persecute Zhang Hongwei ceaselessly.” 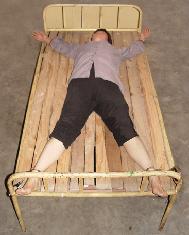 Over the past years, Mr. Zhang has suffered many forms of cruel torture at Jilin Prison. He was confined to solitary confinement for 2 years and 5 months. He was tortured with the “Sitting Board” from 4:30 a.m. in the morning until 8:30 p.m. at night. The prison instructed criminals to watch him, flick his eyeballs and nose, pull his eyebrows and hair, and torture him with the “Sitting Board” for long periods of time. They tortured him severely with the “Stretching Bed” because he wouldn't give up his beliefs. They beat him savagely after stretching his four limbs on the “Stretching Bed”. They tortured Mr. Zhang with many kinds of torture including the “Death Bed”, suffocating him with smoke from burning cigarettes, scalding him with boiling water, gagging him with dirty cloths, stabbing him with needles, and handcuffing and kicking him. Afterwards, Mr. Zhang told his family, “I wrote many letters of appeal and described the illegal torture that was inflicted on me, but the prison guards wouldn't send them to the relevant authorities.”

Five Falun Gong practitioners, including Mr. Zhang Hongwei, Sun Changjun, Ye Songchang, Wang Xiaoguang and Wang Xiaohu, have also been deprived of visitation rights and are in a ward where the elderly and the disabled are held.

Jilin Prison has actively persecuted Falun Gong practitioners for many years. According to incomplete statistics, approximately 20 practitioners have been directly persecuted to death or died shortly after being tortured and then transferred to another prison or released on bail for medical treatment. Many have been tormented to the point of mental collapse, including Mr. Yun Qingbin. Many more have been disabled as a result of torture.