There is a large population of practitioners in Taiwan from various walks of life. They have all benefited deeply from practicing Falun Gong and share one wish, to spread the beauty of Falun Gong and end the persecution of the practice.

Mr. Chang Yuanchang, from Taoyuan, Taiwan, graduated from Chung Yuan University in 2011 as an accounting major. He started practicing Falun Gong after a schoolteacher introduced him to the practice. He and his high school friends have been practicing Falun Gong for seven years. As the oldest child, and the only son in the family, Chang admitted he was spoiled. His parents paid more attention to him than his two younger sisters. He said it contributed to his willfulness, bad temper, and sensitivity, and he was also prone to colds despite his youth. He has changed a lot since he started practicing Falun Gong. He is no longer susceptible to colds. Yet he made the greatest improvement in his temperament. He has become more thoughtful of others. Mr. Chang said that he made the trip to Taipei when he heard about the parade and candlelight vigil. He said, "I must step forward as a Falun Gong practitioner. It appears that [the CCP's] persecution of Falun Gong will not last."

Ms. Ma has been explaining the facts about Falun Gong to tourists from China in front of the Taipei 101 skyscraper on a regular basis for years. She noticed many Chinese tourists at Freedom Plaza during the candlelight vigil and approached them to explain the reason for the event. She told them, "Withdrawing from the Chinese Communist Party (CCP) and its two affiliated organizations will ensure your safety." Many tourists replied, "Okay. We understand." The tour guide added, "I will pass the message along."

Ms. Chen Meili has been practicing Falun Gong for four years. She previously practiced many different qigong schools before she was drawn to Falun Gong's profound content. She finds Falun Gong's doctrines to be broad and comprehensive, surpassing all the cultivation schools she has known. She read the teachings of Falun Gong and began the practice without seeking any personal gain. She has been following Falun Gong's principles of Truthfulness-Compassion-Forbearance in her daily life and conducting herself as a cultivator to become a better person. Ms. Chen said, "I have a measuring tape in my heart, by which I measure myself with high standards." She has participated in events for the last four years to raise awareness about the persecution of Falun Gong by the CCP. She said she is joining the force of righteousness in the hope of ending the persecution quickly.

Ms. Li Suchu is admired by her colleagues and family. She worked diligently and looked after her mother-in-law, who was battling cancer. Ms. Li never complained about her filial duties over the past six years. Her mother-in-law, before she passed away, said that there was no one else she trusted more. Ms. Lin confessed that it would have been a great challenge to be tolerant at all times if it had not been for Falun Gong. She said, "Teacher requires his students to forbear even when it is difficult, and to be thoughtful of others at all times. We are required to be kind to everyone."

Ms. Lin's husband, Shi Heyan, had been frail and prone to illness since he was young. He had sought medical treatment in many different places before he and his wife started practicing Falun Gong 14 years ago. They gave it a try, thinking there was nothing to lose. Shortly after he started practicing Falun Gong, Mr. Shi was cured of the allergic rhinitis he had suffered from his youth. He has no longer had to seek medical treatment since he started practicing. The transformation in his health has reinforced his faith in Falun Gong. The couple has been volunteering to spread the truth about Falun Gong to the Chinese people via phone calls and distributing Falun Gong materials at famous tourist spots in Taiwan so that more people from China will understand Falun Gong better. 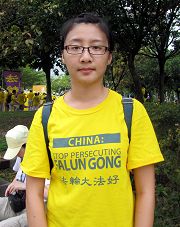 Ms. Chang Yahsiang, a college student, has been practicing Falun Gong since kindergarten.

Ms. Chang Yahsiang, a music major in her junior year at Dong Hua University in Hualian, Taiwan, has been practicing Falun Gong since kindergarten with her parents. She traveled all the way from Hualian, in the eastern part of Taiwan, to Taipei for the parade and the candlelight vigil. She said, "July 20 is a significant day for Falun Gong practitioners around the world, because the Chinese Communist Party began to suppress Falun Gong on July 20, 1999. This is why I decided to join today's events. I wanted to help more people learn that people around the world practice Falun Gong—yet China suppresses Falun Gong and persecutes those who practice it. I would like to take this opportunity to help more people become aware of Falun Gong and the cruel persecution of the practice."