(Minghui.org) Falun Dafa practitioners of Norway began a month-long truth clarification activities beginning on July 2, 2012, outside the Parliament Building in Oslo to expose the Chinese Communist Party's (CCP) 13-year-long persecution of Falun Gong. July is tourist season in Norway, and the eye-catching truth-clarification boards attracted many tourists and local residents. People took fliers, signed petitions condemning the persecution, and some Chinese tourists announced their withdrawals from the Chinese Communist Party and its affiliated organizations. 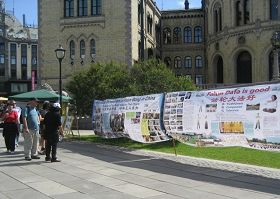 Falun Dafa practitioners clarify the facts outside the Parliament Building in Oslo Norway. 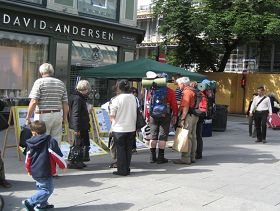 Learning the Truth and Signing the Petition

At the truth-clarification site, many people learned the facts about the persecution and took the initiative to sign the petition forms condemning and requesting an end to the persecution.

One young Norwegian lady walked directly to the signature table and signed her name. While writing her name and address, she said she worked in the Embassy and already knew about the persecution of Falun Gong. She fully supported the practitioners' endeavor.

A young man read the display boards closely for some time and then looked at the banners. He asked many questions, including what Falun Gong is, and why the Chinese Communist Party wants to persecute Falun Gong. Upon hearing the answers, he signed his name on the petition form and bought the book Zhuan Falun. He said he wanted to learn more about Falun Gong.

I Want to Read Zhuan Falun

A middle-aged Chinese woman came to the booth and wanted to talk to the practitioners. She said she was leaving Norway that afternoon and she had many questions. She said her mother practiced Falun Gong before the persecution started but later quit the practice in fear. The lady had another relative who also practiced for many years and was detained and jailed a few times, but was still persistent with her belief. The lady wanted to understand why practitioners do this. A practitioner talked about her own cultivation experiences, the benefits of both mind and body, and her understanding of cultivation practice. Gradually, the Chinese woman understood and learned the facts. When the practitioner told her the meaning of quitting the CCP and its affiliated organizations, she willingly quit the CCP. She also told the practitioner seriously that she would read Zhuan Falun. When she was leaving, she took many printed materials in Chinese language.

Can You Talk to My Father Too?

A young Chinese girl came to the event one day and told a practitioner that she was from Kaifeng, in Henan Province, and she knew a person who was involved in the “Tiananmen Self-immolation.” She said, “Can you tell me why she wanted to set herself on fire? Let me see if your explanation is convincing.” So the practitioner explained to her the major doubts in the CCTV's news with pictures and analysis. She then told her the teaching in Zhuan Falun, that practitioners are taught that committing suicide and killing lives is wrong. Suicide is a crime to a practitioner. The girl said that she then understood.

Next, the practitioner talked about the recent events of Wang Lijun, a Chinese official who went into the U.S. Consulate in Chengdu City, and also discussed the live organ harvesting from jailed Falun Gong practitioners and the wave of Chinese quitting the CCP and its affiliated organizations. The girl agreed to quit Youth League (a CCP-affiliated organization) with a pseudo name.

In the end, she gave her father's phone number to the practitioner and said, “Your explanation is very clear and convincing. Can you talk to my father too? He is in China.”