(Minghui.org) Falun Gong practitioners in Germany held activities on August 18, 2012 in Offenburg, on pedestrian streets in Mainz and in downtown Bayreuth. They raised awareness about the persecution of Falun Gong by the Chinese Communist Party (CCP). The CCP's brutal practice of harvesting organs from living Falun Gong practitioners shocked the German people, who signed a petition to call for an end to the persecution.

Offenburg is called “the gateway to the Black Forest,” and is located 20 km away from Strasbourg, France, the seat of the European Parliament. It's a hub of international transport routes. 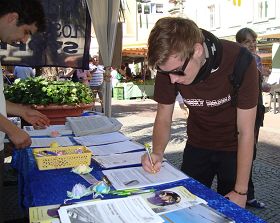 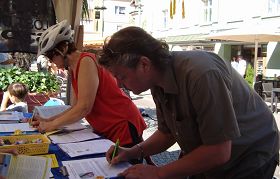 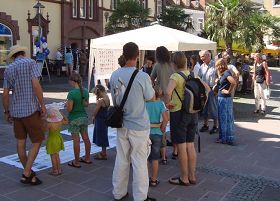 The information table was set up close to a farmers' market in downtown, the city's most lively place on weekends. There were residents who went shopping and tourists who drank coffee outside cafes. Many people stopped to view the Falun Gong information displays and express their concern and support. An elderly man who stopped to get a flyer said, “Someone said that you are involved in politics?” The practitioner smiled and explained, “We are cultivators, and are not interested in political power. We are simply raising awareness about the persecution. We want to tell the world that the Chinese Communist Party tramples upon human rights and persecutes Falun Gong. We call upon people to stop the CCP's crimes against humanity, to safeguard human rights and the world's universal values.” The elderly man kept nodding his head in agreement.

Pedestrian Street in Mainz: Many Sign to Oppose the Persecution

Outside the C&A Eco-Store in Mainz, practitioners set up an information table, put up display boards, and began distributing flyers and collecting signatures. 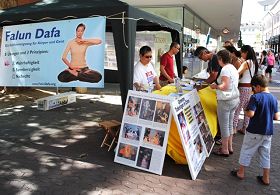 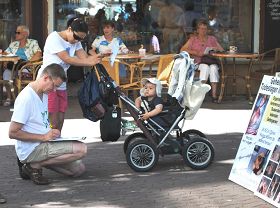 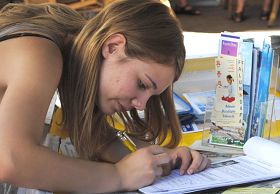 In recent years, many German people may have heard of the CCP's illegal organ transplantation from the media (such as Voice of Germany), from The International Congress of the Transplantation Society held in July 2012 in Berlin, or from the public activities held by Falun Gong practitioners.

Although it was considerably hot that day, practitioners collected several hundred signatures within a few hours. These signatures were then mailed to the German government.

People in Bayreuth Shocked at the Brutality of the Persecution

During the Wagner Festival in Bayreuth, many reporters, tourists and spectators were out and about. Falun Gong practitioners collected signatures in downtown. They used a loudspeaker to broadcast recordings exposing the CCP's crimes of harvesting organs from living people, its genocidal persecution, about two plastination factories in Dalian City, Liaoning Province that sell the corpses of Falun Gong practitioners, and the questionable sources of more than 10,000 organs for transplants each year in China. Many Germans who walked to the information table to sign the petition said that they came after listening to the broadcast from the loudspeaker. 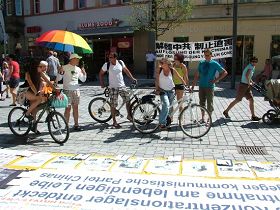 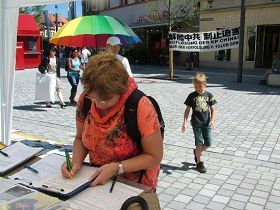 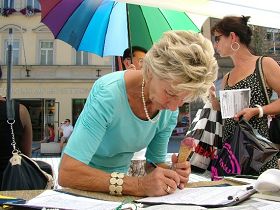 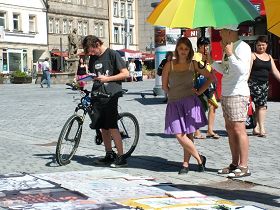 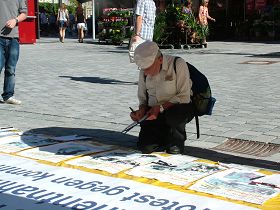 Many people who signed the petition to condemn the live organ harvesting asked the same question, “Is it true? It's so horrible!”